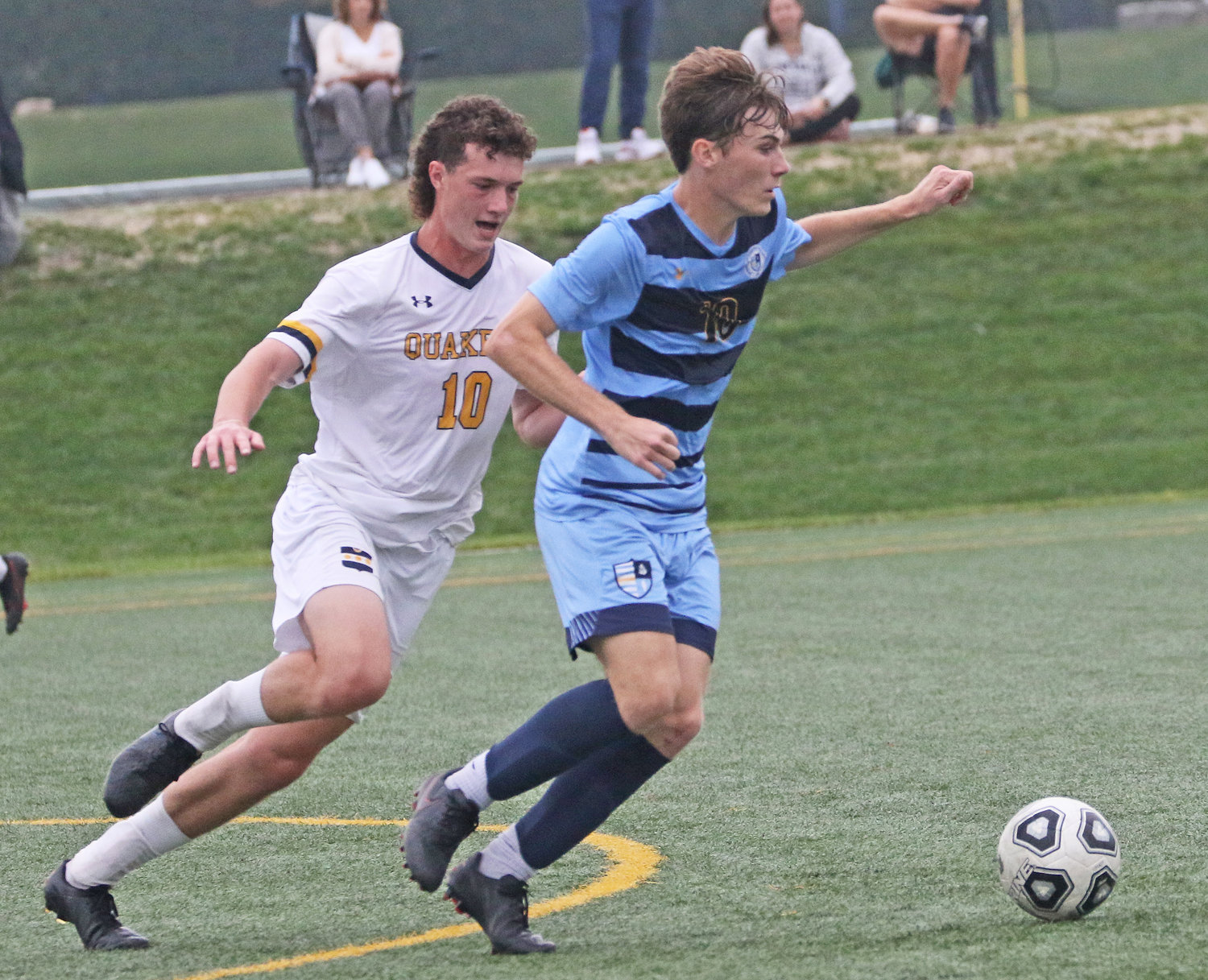 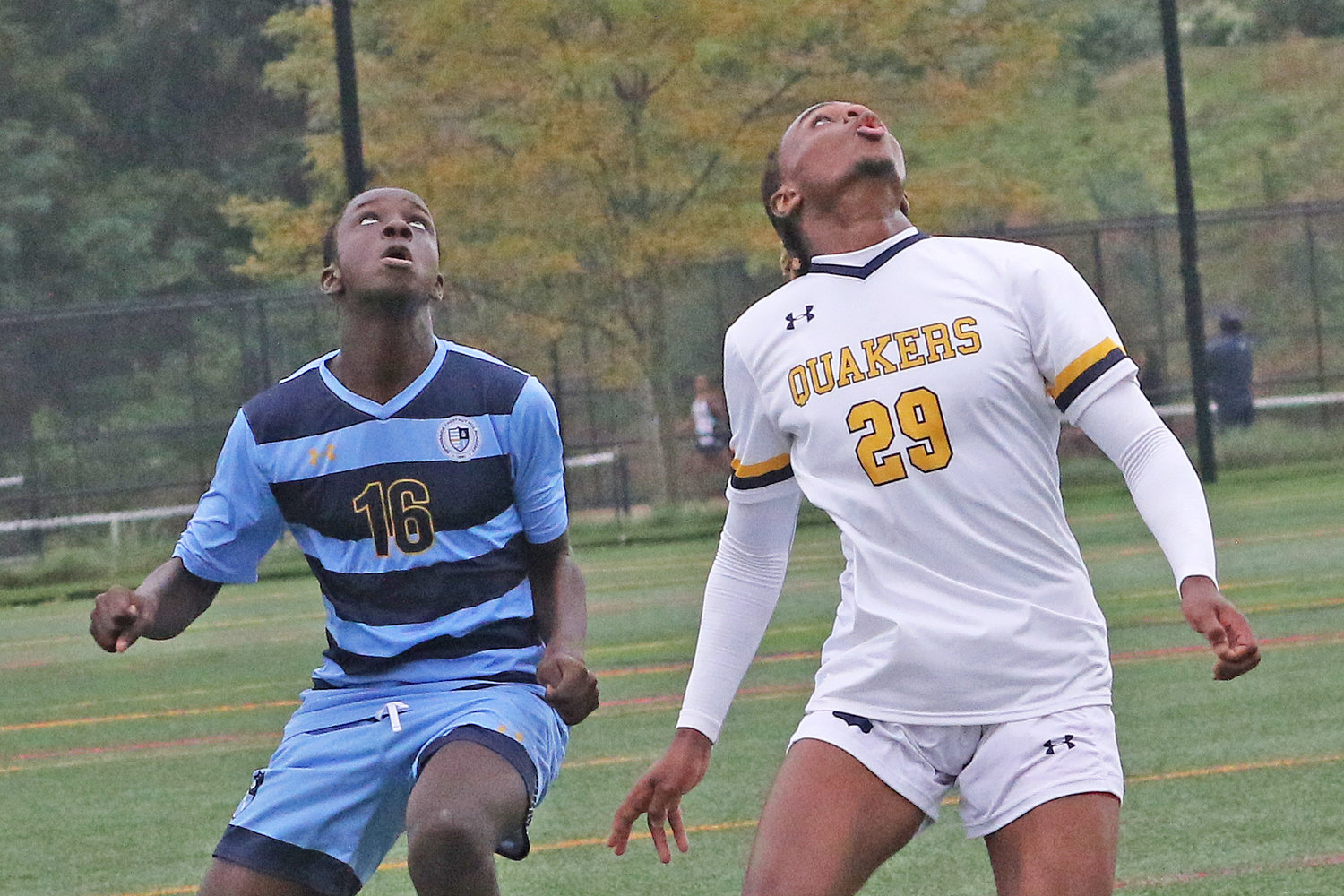 Because the ball could not be placed in a timely manner for an SCH free kick a few meters above the middle of the 18-yard line, an official signaled for the clock to be stopped. That's not supposed to happen under Inter-Ac rules, but like most refs, the two game officials spent the vast majority of their time following the PA Interscholastic Athletic Association (PIAA) rulebook. (Two instead of the usual three game officials, thanks to lack of personnel.)

The clock stopped with four seconds left, after the teams had played almost 80 minutes of spirited, physical soccer with the scoreboard still reading 0-0. On a strong kick by SCH senior Casey Baker, the ball sped between players from both teams scattered around the penalty area and made it into the Quakers' cage, giving the host Blue Devils a 1-0 win.

Neither team had covered itself with glory during its non-league outings in September. Springside Chestnut Hill came into Tuesday's tilt with a record of 4-4, while Penn Charter was 0-4-1. SCH head coach Brian Zalasky did say that a demanding match against La Salle High School (the Devils won, 2-1) helped prepare his club for the kind of resistance it would encounter in Inter-Ac play.

Two regular starters for Penn Charter, both seniors, were unable to play in the league opener. Forward Ethan Cullen was sick, and the day before the game midfielder James Fitzgerald had received a cut requiring stitches.

"I don't know if it had a real impact on the game," said PC head coach Bob DiBenedetto, "but it changes the way you line up."

In the SCH goal cage, eighth-grader Cole Carberry has staked a solid claim to the starting job. Penn Charter, on the other hand, has been alternating between junior Shawn Flynn and sophomore Peter Punchello. Often they'll each play for half of a given game, and DiBenedetto said he usually leaves the decision up to them.

The coach noted after Tuesday's contest, "Today Shawn was really on top of his game in the first half, so he played the second half, too. Peter will then get the start against Haverford on Friday."

Penn Charter made some early attacks, with speedy junior Nick Bolden posing an obvious threat. The Blue Devils' Carberry was able to corral the ball on a PC free kick served at him about five minutes in. The Quakers also proved effective at impeding the Devils' offensive transition as the hosts tried to bring the ball out of their defensive end.

One of SCH's first serious shots, by junior Colin Woehlcke, struck the legs of a defender before it could reach Flynn. Later on, Carberry had to leave his feet to save an outside shot by Charter senior Jackson Tullo.

As the clock began to drop through the second 20 minutes of the first half, Springside Chestnut Hill had some chances on corner kicks, but didn't score. On one of these restarts the ball travelled from the right corner across the goal, and a strong shot from the left by Baker angled back across the goal mouth and outside of the far post.

Late in the half, Blue Devils junior Danny Heep began what looked like a dangerous run towards the PC 18-yard line, but as he got into the box he was surrounded by three Quaker defenders.

The visitors hadn't created very many genuine scoring opportunities for themselves, but they had controlled a lot of play on the field through their aggressiveness.

"In terms of intensity, desire, fight - winning first, second, and third balls - they were all over the field," SCH's Zalasky said.

DiBenedetto agreed, saying "I thought we were the more aggressive team and we won almost every loose ball. We feel that we can take them out of what they like to do. We wanted to make them play our game, and I think we did that. On attack we weren't able to generate a whole lot, but we were able to hold them off, and that's kind of our plan. We want to counterattack late in the game."

Zalasky said that in the halftime huddle, "We told our guys that [the Quakers] were getting chances, or half-chances, because we weren't matching their intensity, their work ethic. They were going right at us, putting the ball over the top and trying to catch out some of our young defenders. We needed to focus on what we like to do, controlling the ball, finding feet, but we needed to get rid of the ball quicker. In the second half I think we did that a lot better."

Still, Penn Charter remained the aggressor early in the second half. On a long free kick by senior Jason Stearn with five minutes elapsed, SCH's Carberry grabbed the ball out of the air. Bolden made a run down the left wing for the Quakers, but the effort was eventually curtailed by Abdoul Diallo, a sophomore on the home team.

At the other end, a good cross from the left endline found no Blue Devils making a weak-side run to get off a shot. SCH earned several corner kicks, with a shot missing the upper right corner of the Quakers' cage on one of these sequences.

A Charter defender got a piece of the ball on an attempt by the Devils' Woehlcke, and Baker had a shot saved by PC's Flynn after he received the ball on a crossing pass by Heep. With around 10 minutes left in regulation play, Carberry took the ball out of the air in the SCH box after visiting sophomore Jimmy Melnick sent in a long free kick.

As time really began to grow short, Springside Chestnut Hill senior Sean Stackhouse lofted a potentially dangerous serve into the Penn Charter box, only to see junior Quinn Coyle head the ball away. The Blue Devils were pressing the attack as time wound down, but Flynn held firm, stopping a shot by Heep with about a minute left.

On another SCH foray, Penn Charter committed a foul a few meters above its 18-yard line, in the center of the field. PC players stood around the ball and seconds were ticking away as the officials slowly set things up for the restart.

In the Inter-Ac, time is counted down on the electronic scoreboard, and the refs are not allowed to add "extra time" as is done in professional and international matches.

"That's the rule, the clock doesn't stop, but these [refs] didn't know the rules," DiBenedetto said.

In the standard three-official system, the two linesmen do not make rulings on the field, only the head official. But here, with only two refs, both were on the field and they sometimes had to consult one another to make a judgement. When fouls are called, the offending team's players are supposed to immediately move 10 yards away from the ball so that their opponents can restart play.

SCH's Zalasky said, "I think, normally, what should've happened is that the refs would stop the clock and issue a caution [to PC, for not promptly withdrawing], but these refs didn't want to give out the caution."

The officials eventually decided that there was undue delay, and by the time they made the signal to the scoreboard operator to stop the clock, four seconds remained. Baker got off a strong kick, and inside the box fellow senior R.T. Genther made a feint toward the ball but then let it go by untouched. The ball went in, and the Blue Devils celebrated the winning goal as time ran out.

UPDATE: On Friday, October 8, the SCH squad traveled to Germantown Academy to take on the Patriots, who had opened league play on Tuesday with a 1-0 loss at Episcopal Academy. The Blue Devils would win by the same score on Friday, with the lone goal coming with around 13 minutes left in the first half as Diallo converted off of a corner kick by Woehlcke.

With seven-and-a-half minutes remaining in the game, the large home crowd cheered as GA junior Eli Torrey appeared to score the tying goal from the middle of the box. However, the shot was disallowed due to an offsides call, and SCH took home the victory and a 2-0 league record.