Playing at home in Germantown Academy's Carey Stadium October 15, the Patriots' girls' soccer team launched into their second round of games within the Inter-Ac League. 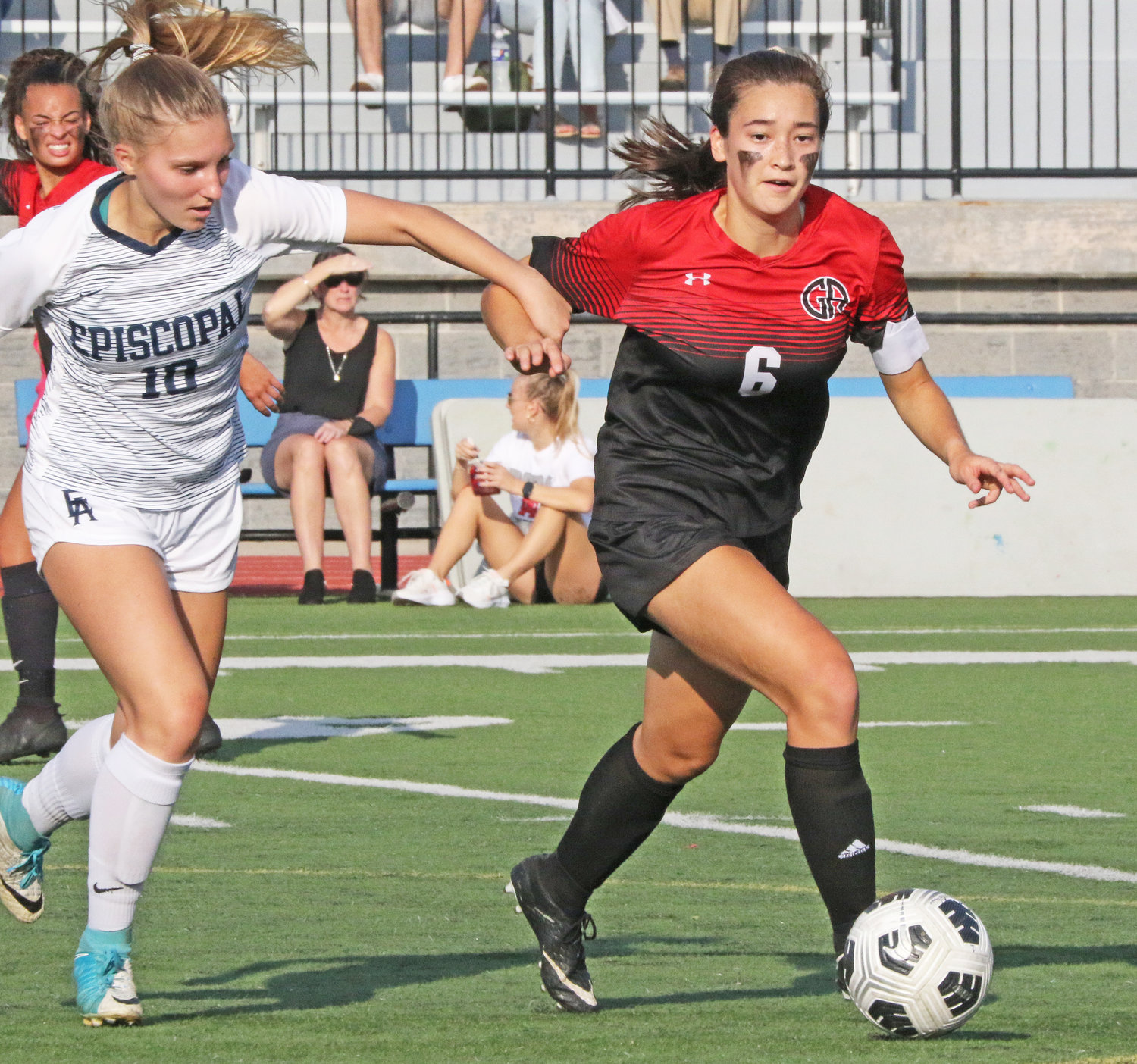 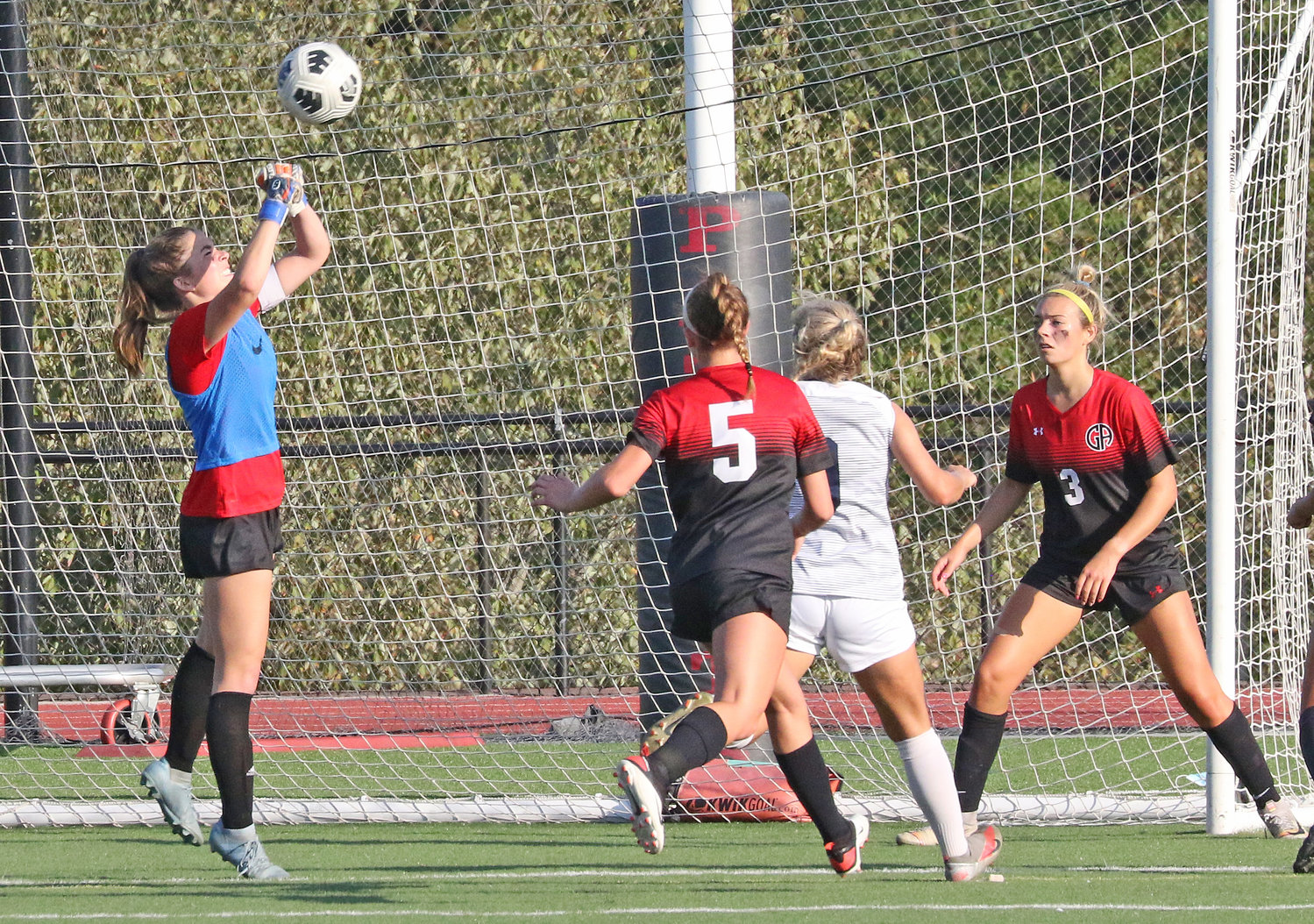 On an Episcopal corner kick from the right, GA goalie Caitlin Boland-Szura (left) punches the ball away as Patriots Kayla Sweeney (number 5) and Heidi Cross (right) defend on the play.
Tom Utescher
Previous Next
Posted Tuesday, October 19, 2021 8:00 am
by Tom Utescher

Playing at home in Germantown Academy's Carey Stadium last Friday, October 15, the Patriots' girls' soccer team launched into their second round of games within the Inter-Ac League.

Their opponents, the Churchwomen of Episcopal Academy, had beaten them 4-0 when the teams first met back in September. Although GA didn't win last week's rematch, it played much better, taking its guests into the last five minutes of the second half with the score still 0-0.

Episcopal freshman Avery Le scored with 4:52 remaining, and EA left Fort Washington with a 1-0 victory that raised its season record to 7-2-1 overall and 4-2-1 in league competition.

Germantown emerged at 3-7-1 overall, and still was seeking its first Inter-Ac win, with its record now 0-6-1.

In the middle of September, the Pats were above .500 against all opponents, with a 3-2 ledger that included a 2-1 win over a strong New Jersey squad, Pennington School. Then a pair of important GA starters suffered season-ending injuries; senior Lilly Funk and junior Chloe Sweitzer.

"Those injuries changed us," stated Chris Nelson, now in his 11th season as the Patriots' head coach.

Funk is a team captain this year, along with classmates Caitlin Boland-Szura (the starting goalie), Alex Goodridge (who scored both goals against Pennington), and Cailin Hasson. Another senior, Heidi Cross, has already made a college commitment, but not for soccer. She'll be playing lacrosse at Florida's Stetson University.

Funk had been a linchpin in the middle of the field for GA, and with her and Sweitzer out, it took awhile for the team to adjust and come up with an effective alignment.

Now, Nelson said, "We've finally got the midfield set up after trying a number of different things following that injury to Lilly."

Arrayed across the center of the field for Germantown junior Taylor Weiss, sophomore Izzy Casey, and freshman Jessica Kolecki.

As last Friday's contest got going, it was soon apparent that the speed of Episcopal's Erin Cunningham would make her a threat along the right wing. On one several early charges, she got off a shot that was blocked by Kolecki. At the other end, GA junior Sage Battisto also had a shot deflect off the legs of a defender.

The Churchwomen were unable to generate a shot off of a corner kick, and later on a few assaults up the left wing they were thwarted by Patriots sophomore Gianna Grosso. A long outside shot by Episcopal that had some pace on it was grabbed by Boland-Szura in front of the cage.

Another GA 10th-grader, Elizabeth Scheid, stopped two consecutive rushes by the visitors, and the teams reached halftime still tied at 0-0. Grosso, Scheid, and Cross are at the heart of the Patriot defense in front of Boland-Szura.

The senior keeper made several saves as Episcopal renewed its attacks early in the second period, and later a threatening serve into the box by the Churchwomen proved fruitless as the Patriots' Scheid cleared the ball away.

At the other end Germantown got an airborne ball into the EA penalty area on a long throw-in by Cross, and a defender for the Churchwomen got her head on the ball before any GA girls could reach it.

As the game clock slipped under 10 minutes to go, the visitors sent a corner kick inside, but the ball deflected off the head and shoulder of Weiss, and the Churchwomen didn't get a shot.

On the next actual EA shot, a ball hit on the ground from just inside the middle of the 18, Boland-Szura made a hockey-style kick save. One of the zeroes on the scoreboard was finally rubbed out as Episcopal scored with 4:52 left to play. Two ninth graders teamed up on the play, with Kate Dente sending the ball inside from the left endline and Le punching it into the goal.

The Churchwomen threatened to add an insurance goal on a corner kick in the final minutes. Here, Boland-Szura snared the ball for the Patriots, but the horn soon sounded to signal a 1-0 Episcopal victory.

"I thought we played a great 79-plus minutes," Coach Nelson said afterwards. "We gave up one bad cross where we could have done a couple of things differently. We played with great intensity, and I think we're headed in the right direction."