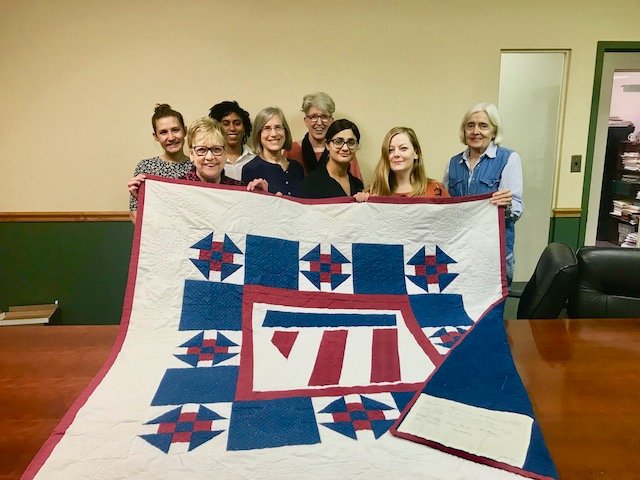 Mt. Airy resident for the last 14 years (and before that, Chestnut Hill) Margaret Guthrie, a former award-winning journalist for many years, is now retired, but at age 82 she is still finding ways to be of great benefit to the community. Now a renowned quilt maker, thanks to her son Cort, who encouraged her to begin quilting, Guthrie is now helping local nonprofit organizations to raise muchneeded funds with quilts she helped to create.

For example, she was the primary engine driving a magnificent red/white/blue work of art that recently helped to raise more than $5,500 for the Women's Law Project, which put up a large screen at their big fundraising event with the quilt on it in black and white. (Quilts normally raise in the $1,500 to $3,000 range.) As people wrote checks and donated money, blocks of the quilt appeared in color, and donors names were listed on the left side of the screen. The actual quilt was displayed next to the screen, so people had an idea of what the screen would look like once they reached their goal.

“Margaret has led a group of us through three quilting projects,” said Betsy Teutsch, a well-known Mt. Airy community activist and author. “She has done the bulk of the work, with help from another Chestnut Hiller, Brighid Blake. The first quilt was for Dining For Women; the second was for Food Moxie, and the most recent one for Women's Law Project. They all did a wonderful job using the quilts to raise money.” (Besides Guthrie and Teutsch, the other quilters were Mari Flamm, Carol Tracy, Raven Dorsey, Terry Fromson, Dabney Miller, Amal Bass and Tara Murtha.)

Guthrie's parents moved to Wyndmoor after World War II when she was just 9. Her parents enrolled her in Miss Zara’s School on West Moreland Avenue, where she graduated in 1949 and went on to Springside, graduating in 1955. She attended Pembroke College in Brown University in Rhode Island but left to get married before she could graduate.

“I have two favorite teachers,” Guthrie recalled. “The first was my French teacher at Miss Zara’s, who kindly and patiently tutored me in French until I was on a par with my classmates and who also taught me to sew and to see how beauty can be created with cloth and thread and imagination.

“My other favorite teacher was Emily Jane Low, my English teacher in the upper grades at Springside. She was devoted to the practice of perfect English and the writers she deemed worth knowing, but what made her outstanding was her magnificent sense of humor. I wish I still had my papers from her, marked up in red ink with priceless comments.”

Guthrie was the editor for a small town newspaper in central Wisconsin that no longer exists from 1977 until 1982. She then became a freelancer and wrote for the Chicago Tribune), the Milwaukee Journal (“I used to joke with my editors there that I had written for every department except the obituaries”), did book reviews and a couple of travel pieces for the New York Times and regional magazines.

An article by her published in Audubon magazine was accepted for use in a children’s book about nature for Canadian schools. Before retiring Margaret spent three years in the editorial department of The Scientist. She wrote a lot about food, food producers and chefs and ended up doing a series of regional cookbooks and one for the thoroughbred racing community, a total of nine in all.

One of her most memorable stories was a profile of a man named Erroll Davis, an executive vice-president of a local utility company.

“We became friends, and eventually I said it was important for people to learn the difference between a Caucasian and an African American ascending the corporate ladder. He was the first African American to head a major utility.”

Another story that stands out for Guthrie was about Ferdy Goode, a Vietnam veteran who made birchbark canoes for a living.

“He was living off the grid before it became trendy. I went camping with him often. He would send me a postcard to let me know there was a new canoe that needed testing, and off we would go. The Wisconsin Writers Guild awarded me the prize for outstanding article on the outdoors one year for my story in the magazine section of the Milwaukee Journal about one of our camping trips. I won other awards, but I remember that one because it came with a big check, a total surprise.”

The quilt project began as a way to celebrate Guthrie's turning 80.

“When living in Madison, a friend, Sara Obern, and I had taught quilting classes and made a couple as fundraisers for organizations like the Women’s International League for Peace and Freedom. The idea of making one to benefit an organization I supported seemed like a good way to celebrate octogenarianism. I asked if anyone was interested and was surprised at the enthusiasm. We began, and then Donald Trump was elected. Now designating ourselves the 'Stitch and Bitchers,' we kept going after the first quilt was completed.”

When asked what person in history she would most like to meet, Margaret replied, “I would choose Elizabeth I of England because I want her to tell me how she outwitted so many men when women were considered maybe one step above cattle and horses. She was the Nancy Pelosi of her era, and I want to hear from her how she did it.”

Guthrie has three children – Cort, Katharine and Annie – sisters Penny McCrudden and Tandy Guthrie and a host of nieces, nephews and great-nieces.

The art, the music, the neighbors