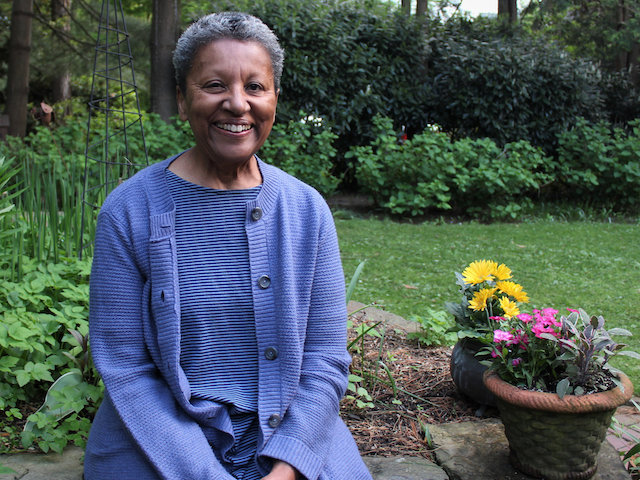 Joan Countryman was the first African American student to graduate from Germantown Friends School, beginning in the third grade with the Class of 1958.

“In second grade at the Emlen School, I was in the top reading group; I was reading ahead, which – shall we say – provoked the teacher. I needed more,” she said in a recent conversation. “When I was five, I ‘taught’ other kids their numbers at pretend school in my basement!”

That was perhaps an auspicious beginning for a lifelong career in education that included teaching, a graduate degree at Yale in Urban Planning, study abroad as a Fulbright Scholar at the London School of Economics, and a later career in education management that led to her co-founding the Oprah Winfrey Leadership School for Girls in South Africa.

In accordance with its Quaker heritage, GFS extended enrollment to African American children in 1948.

“I was the ‘first’ because I was the oldest – in third grade,” she said. “Others started, too, but they were younger. Whatever came up was new to all of us, but especially to me, as the oldest.

“The experience was very good. I made lasting friendships there. Yes, there were a few parents who withdrew their children, but looking back, most parents, Quaker or not, were accepting. The teachers and children welcomed me – I felt no discrimination.”

Countryman’s family motto could very well be “Education is What We Do.” Her father graduated from Howard University with a degree in electrical engineering in 1933, hardly prime time for electrical engineers. He explored jobs with the New York City Police Department and the Philadelphia School District.

The school job came through first, so the young family moved from Washington, D.C. when Joan was 4, first to 12th Street in North Philadelphia, and soon to East Upsal Street in Mt. Airy. Her father became the first African- American high school teacher in the district. He taught mathematics and later became a guidance counselor. Today, Countryman’s son and daughter are educators.

“I learned the beauty of mathematics myself at GFS and was encouraged by my teachers to attend Sarah Lawrence College. It was the right choice, and, guess where I eventually wound up teaching? Germantown Friends. I taught math there for 23 years and became head of the department.”

After GFS, Countryman learned the finer points of education management as she was appointed head of Lincoln School in Rhode Island from 1993 to 2005. This prepared her well for her time planning and creating the Oprah Winfrey Leadership Academy for Girls, starting in 2006. She says that Winfrey is exactly the same off-camera as she is on: “Generous, kind, direct, and strong.”

As for her South African sojourn, Countryman said, “I expected to go for two weeks. I wound up staying for a year.” Winfrey still takes an active interest in the school and travels to South Africa frequently.

As for being honored by Historic Germantown, Joan Countryman said: “I am very proud of my connections to Germantown. We are fortunate to be able to walk around in history.”

Other Historic Germantown Hall of Fame honorees for 2019 include Jerry Pinkney, award-winning book illustrator and African American historian, and Alice Lea Tasman, a founder of the Chestnut Hill Historical Society, and a history-oriented fundraiser for the National Society of the Colonial Dames in America, Commonwealth of Pennsylvania and Historic Germantown’s History Hunters program. This program has welcomed over 30,000 children to Historic Germantown’s 18-member sites.

The awards ceremony will be the highlight of a gala celebration from 6 to 8 p.m. Thursday, June 20. With music, food and drink, in the courtyard of Historic Germantown, 5501 Germantown Ave. Ticket and sponsorship information can be found at FreedomsBackyard.com. Ten percent of all proceeds will go to Historic Germantown’s Sustaining Our Sites Fund.