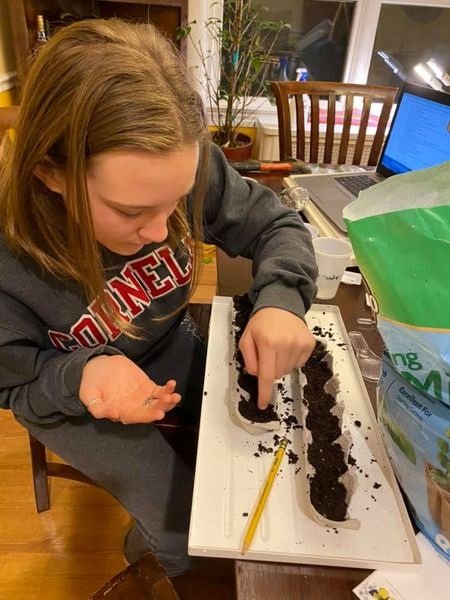 Eleanor Palmer was part of an 8th grade team with Clarissa Lanzas and Sofia Bartoli-Wright that earned the honor of 1st Place in the science fair for their project “Testing the Genes of Soybeans.
Posted Thursday, April 8, 2021 9:30 am
by Emily Plowman

George Washington Carver, scientist, inventor, artist, musician, and humanitarian, once said, “There is no shortcut to achievement.” His statement was certainly proven true by the hard work and efforts set forth by a group of Jenks middle school students who competed in the 2021 George Washington Carver Science Fair, sponsored jointly by Temple University, The Academy of Natural Sciences, the School District of Philadelphia, and the Archdiocese of Philadelphia.

The science fair inspires urban youth to pursue academic accomplishments and careers in science and is open to all students in grades 4 through 12 who attend Philadelphia County public, charter, parochial, and private schools, as well as home-schooled students residing in the county.

Margaret Conway, a science teacher at Jenks Academy for the Arts and Sciences, led a group of ambitious students as they presented projects online to their classes.  Conway praised the students for improvising during their virtual school year stating that the students “rose to the occasion and excelled.” This is the sixth year the middle school students at Jenks have participated in the fair and they have always placed.

In January, presentations were selected to move forward to the science fair and the students filmed their research and demonstrations. Finalists were then selected to participate in a Zoom event, which featured speakers from Temple University, and break-out rooms where students could work with instructors from Temple in a more intimate setting.

After evaluation and appraisal, the winners were announced. The team of Eleanor Palmer, Clarissa Lanzas, and Sofia Bartoli-Wright (8th grade) earned the honor of 1st Place for their project “Testing the Genes of Soybeans” with the hypothesis: “Do roundup-ready plants respond better to roundup than non-GMO plants and what is their effect on the environment?”

They competed against 7th to 12th graders across Philadelphia County. Justin Fulton (6th grade) won 2nd Place for Physics for his project “Protecting Your Head” with the hypothesis: “A watermelon will break in a regular football helmet since it does not have extra protection and technology.”

This year’s competition also marks the third year that Jenks students advanced to the Delaware Valley Science Fair (DVSF). Each year, nearly 1,000 students in grades 6 through 12 from Pennsylvania, Southern New Jersey, and Delaware who place at regional fairs participate in DVSF, where nearly $6 million in scholarship and prize money is awarded to winners. This year, the 8th grade team of Wright, Lanzas and Palmer, as well as 6th grader Fulton, have all moved onto the DVSF, which will be held in April.

Emily Plowman belongs to the Friends of Jenks, a group for parents of J.S. Jenks students.

Jenks Academy for the Arts and Sciences