In Mt. Airy, a tribute to brilliant anti-war musician

In Mt. Airy, a tribute to brilliant anti-war musician 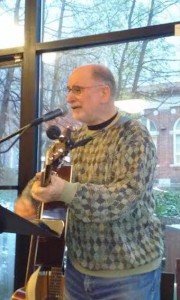 Art Miron of Mt. Airy was one of eight local musicians to perform in the Phil Ochs tribute at Malelani Café in Mt. Airy on April 9. (Photo by Stacia Friedman)

When I heard there was going to be a Phil Ochs tribute, I had to attend. Ochs provided the soundtrack to my high school years. As my grades attested, I spent more time studying the liner notes of his albums than studying for finals. I had seen Ochs perform at the Main Point and knew all the words to his songs. As did everyone who gathered at Malelani Café in Mt. Airy on Saturday night, April 9.

“Phil Ochs was a great role model for me,” said Miron. “I was just starting to play guitar and sing, while Phil was out there boldly presenting his songs. In the 'counter-culture' of the '60s and early '70s, he was a major voice as a songwriter, putting out songs with great melodies, containing strong views about pertinent social issues.”

Miron was a draw for many, including Chestnut Hill resident Linda Baldwin. “I try to catch Art Miron’s performances whenever he's in the neighborhood,” said Baldwin. “Malelani Café is new to me. It was packed with middle age hippies (like myself) and evoked the memory of folksy coffee houses of the '60s, with everyone singing the words in harmony, swaying, tapping feet or clapping along with happy smiles of familiarity. A real sense of community and solidarity.”

I noted all the Bernie buttons worn by performers and listeners. Ochs would’ve found a kindred spirit in Bernie Sanders, whose anti-Iraq War platform reflects the message of Ochs’ “There but for Fortune,” written in 1963 and popularized the following year by Joan Baez :

“Show me the country where the bombs had to fall.

Show me the ruins of the buildings once so tall,

And I'll show you a young man with so many reasons why,

There but for fortune, go you or I…”

Ochs was a gifted writer who dropped out of journalism school just a month before graduation at Ohio State University and headed to the Greenwich Village folk music scene of the 1960s. Lucky for us he did. There, in close proximity to Dylan, Baez and other rising singer/songwriters, Ochs penned the anthems of the anti-war movement: “I Ain’t Marching Any More,” “Draft Dodger Rag,” “Power and Glory,” “What’s That I Hear?” etc.

Most of the attendees and performers were old enough to have grown up with Ochs’ music with the exception of Betsy Moore-Robinson, who admitted that she was “too young” to have remembered Ochs, but that didn’t stop her from doing Joni Mitchell and Richard Farina covers that electrified the audience. “My influences?” said Moore-Robinson. “The Beatles, Carole King, Janis Ian and everything else from then on!”

The occasion of the tribute was the 40th anniversary of Ochs’ death. The prolific singer/songwriter committed suicide in 1976, one year after the Vietnam War ended. He was 36. At the time, I mistakenly attributed Ochs’ death to a career crisis. The music scene had shifted from folk to pop, from coffee houses to stadiums, and Ochs didn’t make the transition.

I also thought Ochs couldn’t adapt to the shift in the cultural landscape. The Revolution never happened. The war was over, there was a Republican in the White House and former hippies were scrambling to get their MBAs. I was wrong on all counts.

We now know that Phil Ochs was bipolar, a condition that wasn’t officially recognized by the medical community until 1980. Ochs’ father, a physician, also suffered from the same syndrome and had been hospitalized several times. During Ochs’ lifetime, the illness was called manic-depression, and there was no effective treatment. Patients received little help financially because Congress refused to recognize manic depression as a legitimate illness.

Ochs also suffered from alcoholism, a form of self-medication common among those afflicted by the syndrome, along with drug abuse. By the time Ochs was officially diagnosed in 1976, it was too late. He hung himself that year. (Note: Political and social activist Abbie Hoffman, a friend of Ochs who also suffered from bipolar disorder, committed suicide with a drug overdose in 1989.) According to the Brain & Behavior Research Foundation, 5.7 million American adults currently have bipolar disorder.

The musical tribute to Phil Ochs benefitted the Philadelphia Interfaith Hospitality Network (PIHN), an organization of diverse congregations that provide shelter and support to homeless families in the Northwest and Northeast. “We made $260  for the PIHN,” said Naylor. “Considering the small size of the place, that's more than I thought we could get.”