Joe’s portraits are so realistic that they look like photographs, as you can see from this portrait of his dog, Malia.[/caption] by Len Lear Rosemary Brewer (nee Rakestraw), 68, lives now off of … 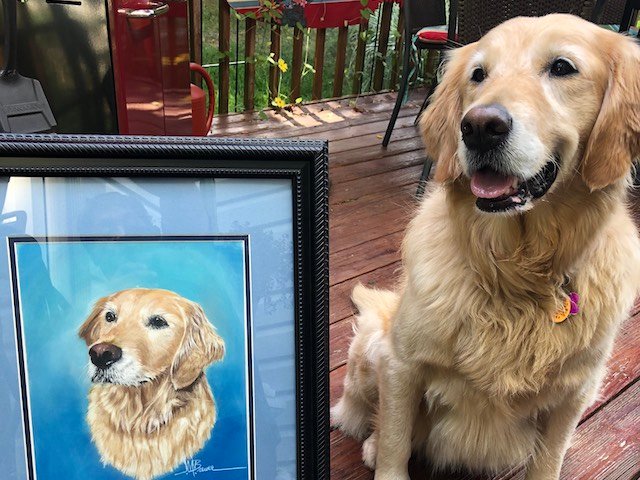 Joe’s portraits are so realistic that they look like photographs, as you can see from this portrait of his dog, Malia.[/caption]

Rosemary Brewer (nee Rakestraw), 68, lives now off of Germantown Pike in Worcester Township, but she has some serious Northwest Philadelphia credibility. “My grandparents raised their family in Chestnut Hill,” she said last week, “and our family has been part of the Chestnut Hill community from 1905 to the present. They had nine children, and all are buried in Holy Sepulchre Cemetery. My grandpa was a stonemason who helped build Holy Cross Church (in Mt. Airy) and a gardener for big properties in this area.

“The original house my grandparents lived in when they came here from Italy is still owned by my first cousin. My mom, Mary Stenella, lived on Germantown Avenue in Chestnut Hill for 30 years.”

Rosemary’s aunt, Camille, lived at the Alden Park Apartments in Germantown and later moved to the Cresheim Valley Apartments in Mt. Airy. Mary's sister, Annie, lived on Allens Lane for many years, and Mary’s brother, John, lived on Ardleigh Street, while another brother, Jim Stenella, lived in Chestnut Hill before an early death after coming back from WWII, as did a third brother, Charles.

“A funeral director from Kirk & Nice wanted to marry my mom, but she said no. She did not want to be married to an undertaker.”

But this article is about the business that Rosemary is in with her husband, Joe, 69, who could charm the skin off a peach. Joe graduated from the Hussian School of Art at 15th and Spring Garden Streets in 1971, but making a living as a fine artist is about as difficult as lifting a huge pile of bricks, so Brewer sold all of his art supplies in 1976.

Joe was drafted into the Army in 1971, and although countless draftees will tell you they were put into jobs they had no background for, Brewer's artistic talent was actually put to good use. He became the base illustrator for Fort Wood in Missouri, painting murals for two years. He also learned to fly and got his pilot's license.

After his military service, Brewer got a job with a company that produced signs for pizza shops, restaurants, etc. Brewer designed and sold signs on commission, going door-to-door to sell signs to businesses. He was number one in sales with the company three years in a row as well as the number one regional manager. Brewer spent 27 years with the company, which went out of business early this year. 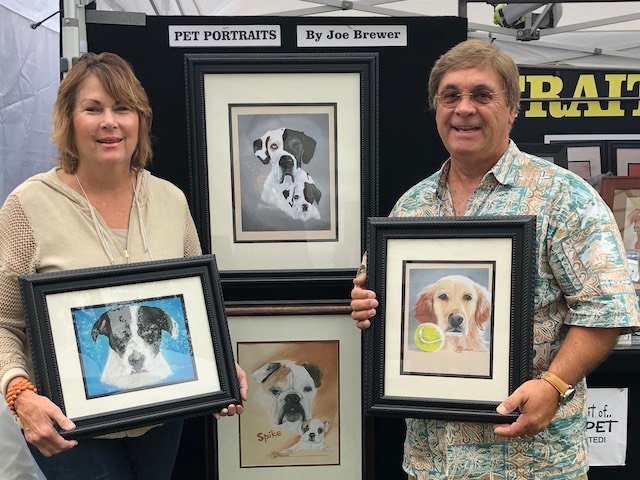 Joe and his wife, Rosemary, whose family goes back to 1905 in Chestnut Hill, display some of Joe’s pet portraits at a recent fair.[/caption]

“My company was going downhill, and I could see that,” said Joe, “so I knew I had to do something else.”

Thus, in early 2018, Joe started going to the dogs, you might say. He revived his artistic chops and began drawing pet portraits, which are literally so good that it is hard to tell the difference between a close-up photo of a dog and the portrait Joe has created of the same dog. His company, Pet Portraits by Joe Brewer, has become so successful that there is a three-month backlog of customers.

“I have looked at the work of great pet artists from other countries on the internet,” said Brewer, “and it has made me work harder in order to get better. Our motto is: 'If it's hard, we can do it; if it's impossible, it takes a little longer.' What's really nice about this is that when I am doing it, I see God in animals and how He created these wonderful creatures.”

Rosemary, who helps with the business, was previously an administrative assistant for 25 years in the Neshaminy School District.

“We would go to veterinary conferences [to find customers] and have been to Pet Expos and Petapalooza in Chestnut Hill,” she said.

“My sales experience really helps me with this,” added Joe. “Many artistic people are very talented but not so good at selling their stuff.”

Brewer has an unusual painting style, using sandpaper on pastel, which gives the work a more three-dimensional look. “A friend of mine at the Hussian School taught it to me. When I get a commission, I give them a pencil sketch and later a sneak peek from the drawing board. Then I send half of the portrait. I want (the customer) to be involved at every stage of the process.”

The Brewers' got their own dog, Malia, from the Delaware Valley Golden Retriever Rescue. It was originally rescued from South Korea, where dogs are commonly killed and eaten for food, by an organization called Humane Society International. In return, Brewer has given HSI portraits of his to be auctioned off, with proceeds going to the organization.

For more information, visit PetArtbyJoeBrewer.com. Len Lear can be reached at lenlear@chestnuthilllocal.com

Enzo is the fastest Chestnut Hill dog on two wheels