How love drove me East of Eden toward the Land of Nod. Part 1

The way to the Land of Nod. by Hugh Gilmore At first it was, “Could you turn over, you’re snoring,” said nicely. “Sure,” I said, “but how could I be snoring? I wasn’t even asleep.” I …

How love drove me East of Eden toward the Land of Nod. Part 1 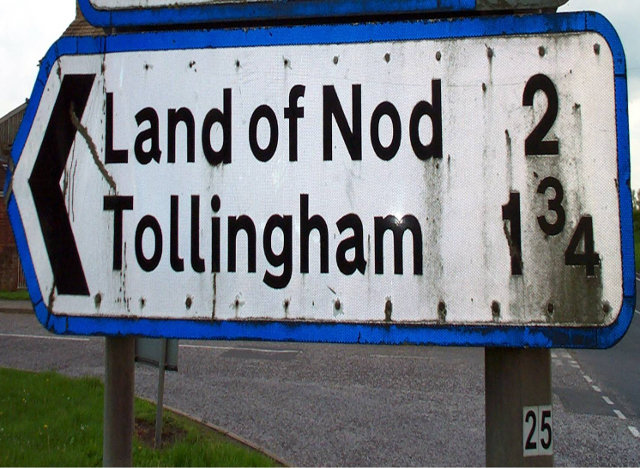 The way to the Land of Nod.

At first it was, “Could you turn over, you’re snoring,” said nicely.

“Sure,” I said, “but how could I be snoring? I wasn’t even asleep.” I turned over anyway.

Maybe over a year’s worth of months, I’d awaken at night and notice my wife, Janet, was not there beside me. I’d get up to make sure she was OK, and find her sleeping peacefully on the sofa, or downstairs in her office, on the inflatable mattress.

One night she was in neither of those places. I worriedly looked around until I found her: sleeping on the backseat of her car in the carport.

“I’m fine, go back to bed,” she said, turning over and pulling the quilt over her head.

In the morning, I’d ask what happened. She couldn’t sleep, she said. Ultimately, after many “I couldn’t sleep’s,” she told me, without rancor, that I snored loudly every night and it kept her awake. She added that it was hard for her to find a place where she couldn’t hear me.

That was a baffling thing for me to hear. I’d never heard myself snore, so I couldn’t quite get a grip on why she’d say something like that. The reality remained, however. I’d wake up alone in the middle of the night.

It took a while, but eventually I caught on to the unfairness of the situation. It wasn’t HER problem if she couldn’t put up with my noise. It was MY problem. And I should take responsibility for it. But how?

While I futilely worked on losing 10 pounds of body weight (all the snoring advice recommends that), I started being the one who left the bedchamber. Every night. We’d start the bedtime routine together: talking and reading, until Janet slipped into the Land of Dreams. Then I’d get up and take my bedding down to the sofa. (Eventually, I pre-made the sofa.) In the morning, before my spouse awakened, I’d slip back in bed upstairs.

So, all was fine, except that I hated waking up throughout the night and finding myself alone. I got to know all my house noises very well, better than I ever wanted to. Got to know the way the light changes as the moon courses the evening sky and the sun eventually rises. But I didn’t marry this woman so I could sleep alone.

“I’ll do something about this sleep nonsense before the year is out,” I promised her in June. We all know what that means in a world dominated by habit, inertia, sloth, ignorance and grin-and-bear-it-ness. Sometime in September I was seeing my ENT doctor for relief from seasonal rhinitis. “Any other problems?” she asked. “Snoring,” I said.

“You should have a sleep study done,” she said. I wasn’t enthused. A friend had one done years ago and he said it was uncomfortable and useless. My ENT doctor said, “If you snore, you might have sleep apnea. That’s not good. It can’t hurt to check it out.”

I smiled and said I’d think about it.

She said, “As long as you’re here, I’ll write you an order for a sleep study. If you decide you want one ... well, here, you have the order already and you won’t have to make another appointment with me.” I took the order and thanked her.

Of course, you’ve guessed correctly that I did nothing. I am a human male, and I don’t leave my medical comfort zone easily. I left the doctor’s office, went home, did my thing for the rest of the day, waited till nightfall, got in bed beside my wife, talked a bit, read a bit, waited for her to fall asleep, got up and went downstairs, slipped under my green quilt, turned out the light, and went more-or-less to sleep – next to the table on which sat my doctor’s order for a sleep study.

This continued every night for weeks, except a new element had been added: As I lay on the sofa I could hear coming from upstairs – where my sleeping spouse lay – so near and yet so far – the very real, loud, hissing, radio-static-like, “white noise” machine she’d purchased and turned on. By now, she was playing at high volume since my snores had achieved Wagnerian dimensions.

Oh my, I thought, I must do something about this. After all, it’s my problem. I called the sleep clinic my ENT doctor recommended and made an appointment. Oh: it was for December 23rd. Oh my, I’d go to bed at the clinic, far away from my spouse, who would get a night off from her white noise machine, and wake up on Christmas Eve. Dang! Well, I did say I’d check into this problem before the year was out. Dang! Oh well, I had nothing better planned for Christmas Eve. Little did I know ...To be continued.

Hugh Gilmore is the author of a memoir titled, “My Three Suicides: A Success Story,” which has been a Kindle Top-100 book for nearly a year.

Exercise can turn back the clock on feeling your age