Rev. Daniel Berrigan was revered for his moral courage by opponents of the Vietnam War and fighters for justice for women, racial minorities and gays. (Photo by Katharine Gilbert) by Sabina Clarke In … 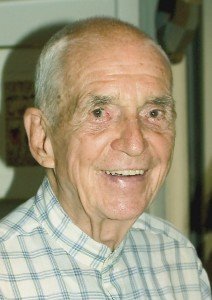 Rev. Daniel Berrigan was revered for his moral courage by opponents of the Vietnam War and fighters for justice for women, racial minorities and gays. (Photo by Katharine Gilbert)

In the 1960s I was aware of Daniel Berrigan and his brother Philip, a Josephite priest, but paid little attention, being sheltered in a conservative Catholic college where war, racism, poverty, capitalistic greed and social injustices were foreign to the curriculum and Catholic intellectuals like Berrigan and Thomas Merton were rarely mentioned or discussed.

Kind of like living in a parallel universe. I found Merton on my own. I recall secretly admiring Father Berrigan but was shocked by his bold actions and his repeated breaking of the law.

Out of the blue in 1981, accompanied by a more radical friend, I attended the Berrigan brothers’ trial in Norristown for their Plowshares Eight action. Then, rather serendipitously in 2001 at a reception at the Wyndham Hotel in Philadelphia, I was introduced to Daniel Berrigan and Martin Sheen, the priest and the actor who were good friends. I was drawn to Berrigan’s simplicity and spirituality. He struck me as a holy man in the saint or mystic realm, a true ascetic. I tucked this in the back of my mind.

At the time, I could not have foreseen spending a memorable afternoon with him in 2008 at his apartment in New York. When I called from the lobby, he answered, “Come on right up.” A plaque on his door had this inscription: “A lack of charisma is a fatal flaw.” This turned out to be a good omen for it soon became apparent that this 86 year-old Jesuit lacked neither charisma nor a sense of humor.

Father Berrigan, who died on April 30 of this year, one week shy of his 95th birthday, reminisced about his early life growing up in Minnesota and his family’s move to a farm in Syracuse and about his German immigrant mother and his difficult Irish father and his beloved brother Philip and other important influences in his life: Dorothy Day, Thomas Merton and Cesar Chavez. We talked about the writing life and writers we’ve met and admired — the Irish writer Edna O’Brien and the American writer Mary Gordon.

We were six boys who endured my father and the economic Depression. We were also depressed at times (laughing). My father was a very tough Irishman. He was also interesting and self-educated, a great reader and a would-be poet who got us interested in books at a very young age. I think it was a good start. We lived on a farm in upstate New York, having transmogrified from Northern Minnesota, under his inspiration. He couldn’t find any Irish in Minnesota, and he couldn’t live without the Irish. So he persuaded my mother to move east, where he knew there was a colony of Tipperary farmers outside of Syracuse, so we got a farm there.

I read that your mother was German and that at some point your father left the Catholic Church. Is that true?

My mother was a German immigrant, and the Irish never really accepted her. That was very painful for us as kids and turned us off the Irish. I was years and years getting over that. They were very tribal. My mother was a convert to Catholicism; my father left the church briefly before I was born but returned. His brother was a priest and his sister a nun. So, there was a heavy air of Irish Catholicism in the family. We attended parochial school all through high school. When I entered the Jesuits, I was way behind in the quality of education and had quite a time catching up. I had no Greek and not a great deal of Latin, and I was meeting the whiz kids from New York City who had plenty of Greek and plenty of Latin and plenty of ego.

What prompted you at the age of 18 to enter the Jesuits and make this kind of commitment to religious life?

Well, my best friend since the 4th grade, Jack St. George, was very interested in becoming a priest. We finally reached an agreement toward our senior year that each of us would write to four religious orders and get their literature and exchange the information and come to a conclusion about which one we liked. We got all this classy stuff from various orders inviting us to “come and play tennis with us and swim in our pool” and so on. The Jesuits were standouts because their little brochure was very unattractive with no pictures, and it just talked about years and years of study and teaching. It was very cool, and we were both very attracted to it.

In 1965, you were exiled to Latin America by New York’s Cardinal Spellman, why?

Spellman was obviously never approving of my activities, but I don’t think he was the one who sent me out of the country. It was the order (Jesuits). They didn’t want this kind of attention. I spoke at a liturgy at the Catholic Worker after a young Catholic Worker named Roger LaPorte immolated himself in front of the United Nations. Because of this and my anti-war activities, I was sent on indefinite exile to Latin America. There was such a public outcry that the authorities were forced to bring me back...So, I was brought back, and the Kennedys gave me a welcome home dinner at Hickory Hill, the home of Robert Kennedy. I was invited to supper with Robert McNamara, the Secretary of Defense, and his wife and some other people.

What transpired between you and McNamara at that dinner?

There was an exchange after dinner. The Kennedys are great at holding these kinds of séances. Robert Kennedy asked if the two of us would talk about the war, and McNamara said, “Maybe Father Berrigan would like to start.” And I said, “Yes…and I’m asking you to stop the war tonight since you didn’t do it this morning.” Well, that kind of stopped him short (laughing). He said, “I’ll put it to Father Berrigan and to all of you; if you come across a people who won’t obey the law, you send the troops in.” I couldn’t believe I had heard that, because he was equating Vietnam with Mississippi. He sounded like a schoolboy.

Sabina Clark is a Chestnut Hill freelance writer. Contact her at @SabinaPatti or at sabinapatti@yahoo.com