Hiller hits all the right notes as musician and lawyer

Hiller hits all the right notes as musician and lawyer 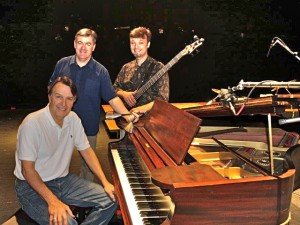 The Standard Time Trio, a jazz group, consists of Ralph Wellington and John Grady, both Chestnut Hill residents, and Ralph Wellington II, of Merion. Either the trio or the Standard Time Sextet, which has three additional musicians, will perform at a spaghetti dinner at Christ Ascension Lutheran Church, 8300 Germantown Ave., on Saturday, Oct. 17, 5 to 8 p.m.

Do a Google search for Ralph G. Wellington, 69, and you’ll discover that he has extensive experience representing major corporations in significant litigation and business matters throughout the U.S. As a partner and former chairman of the law firm Schnader Harrison Segal & Lewis LLP, he has argued before the U.S. Supreme Court, the U.S. Courts of Appeals for the Third, Sixth and Seventh circuits, as well as appellate courts in various states. Among his many accomplishments, Ralph was lead counsel for the Barnes Foundation in its successful multi-year effort to create a new art education center in Philadelphia.

What you won’t find during your Google search is information about his 35-year parallel career as a jazz musician and composer, the two CDs he’s recorded or his numerous performances in and around the city over the years.

“Because four of us in the current group, The Standard Time Sextet, are lawyers and are known in the legal community, we get asked to play at a lot of their events,” Wellington told us. “For example, a few months ago we played at the Kimmel Center when the American Civil Liberties Union had a national conference there. We also played recently at the National Constitution Center for a conference of federal judges.

“We’ve been talking recently about trying to go out on the club scene a little more to play a few things, but getting home at 2 or 3 a.m. is not as much fun as it used to be when we were younger! But we might try to reach out and do some club things like we used to do.”

In addition to Ralph on piano, the band includes his son Ralph Wellington II on bass; John Grady, a Chestnut Hill resident and an attorney, on drums; Ed Neiderhiser, a Lutheran pastor and a chaplain at Graterford Prison, on trumpet; Jake Hart, a U.S. Federal Magistrate Judge, on clarinet; and Jud Aaron, an attorney, on saxophone.

Ralph grew up in a small farm town in the Midwest. His mother, who was not a musician, decided that Ralph and his siblings should learn to play the piano. When he was 8, Ralph started classical piano lessons and continued for 11 years. He also learned to play the organ and would substitute in church every once in a while. He formed a rock band when he was a high school student during the 1960s.

His interest in jazz dates back to a little over 35 years ago. “I moved to the Philadelphia area and was practicing law here. I attended a Lutheran church in the Havertown area. Ed Neiderhiser, who had just come out of the seminary and was an assistant pastor, loved jazz and wanted to form a music group for kids.

“He asked me if I would be willing to help out. Although I didn’t know anything about jazz, I started to listen a little bit. We would go and play at old folks homes and things like that. We decided that maybe we could play serious jazz, so we added another couple of people and started a group called Trinity Jazz Ensemble. For about 10 or 15 years, we played at jazz clubs around the city.”

The proceeds from the CD release party at the Philadelphia Cricket Club benefitted the Lutheran Settlement House. Seven of the 13 songs on the CD are Ralph’s compositions. “Because most of the tunes are mellow, ‘Adrift’ seemed fitting for the title,” he said.

“That’s not to say classical music is not expressive, but in classical music you are playing every note the way the composer wrote it. The expression and intensity come from the way it was composed and from what the musicians put into those notes. In jazz, on the other hand, there may be a melody line, but the rest of it is ad lib.”

His song “Adrift” is an example. “It has essentially a three-note melody, a structure, but basically everything else is flowing, and it’s different each time you play it. If you make a mistake, you can just say you’re improvising.”

How does Ralph juggle his busy law career with composing, practicing, rehearsing and performing? “Music is one of my escapes. Sitting down at the piano and losing myself in music is a blessing. I thank my mother, who has passed on, for making me take those piano lessons when I was a child. Sometimes I just sit down in the evenings and practice. It’s a good balance for me.”

Ralph never gets stage fright before performing. “I’ve been a trial lawyer and an appellate lawyer for four decades or more. I still tell the younger folks that if you’re not getting a little nervous, then you’re not taking it seriously. Yes, you can be a little nervous performing music, too. We always practice before we perform, but it’s not like the world is dependent on how that performance goes. Unlike being in court, where how it goes can significantly affect a client’s life or an individual business, this is music; this is fun.”

Ralph and his wife Peg live in Chestnut Hill. The couple has a daughter, Tyler, and two sons, Ralph and Jeff.

Ralph and the band will perform at a spaghetti dinner at Christ Ascension Lutheran Church, 8300 Germantown Ave., on Saturday, Oct. 17, 5 to 8 p.m. Cost of the dinner is $10. “Adrift” is available at Hideaway Music, 8612 Germantown Ave., and on www.cdbaby.com.