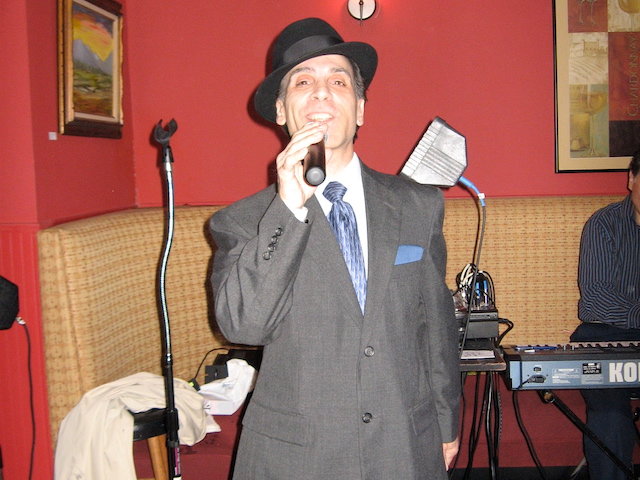 Chip Amodie, a Chestnut Hill native who has been doing a Frank Sinatra tribute show for many years all over the Philadelphia area, will be performing his “Singers of the Century” show on Wednesday, Nov. 6, 7 to 9 p.m., at Maria’s Ristorante, 8100 Ridge Ave. in upper Roxborough. More information at 215-508 5600. (Photo by Len Lear)[/caption]

Joseph “Chip” Amodie III, who grew up in Chestnut Hill, got the nickname “Chip” from his dad (Joseph II), who often called him “a chip off the old block.”

“There were three Joes in the house – my dad, my cousin and me,” said Amodie, whose dad passed away just before his 90th birthday in 2016.

Amodie, 65, graduated from Our Mother of Consolation Elementary School, Cardinal Dougherty High School and Chestnut Hill College in 1976, where he majored in music. He was in the first class of men ever to graduate from CHC.

Even before college, Amodie was almost a full-time musician. In grade school he put together a band that played at school dances. In high school the young guitarist was one of six Chestnut Hill teens in a band called Sound Judgment that played Top 40 and Oldies.

One of the members of the band was Janice MacAvoy, a freelance photographer whose feature, “Where the Hill is it?” has run in the Local in recent years. (Janice attended OMC and then Mount St. Joseph.)

Sound Judgment played, among other gigs, at La Salle High School mixers, dances at Cardinal Dougherty High School and Bishop McDevitt High School and outdoor events such as the Main Street Fair in Manayunk and the Villa at the Mount Fair in Flourtown. The band fizzled out, however, when the members went off to college and went their separate ways.

“I learned to play the guitar from a book in the seventh grade,” Amodie said. “I was in my room trying to follow the instructions in the book, and my dad said, ‘Don’t come out of your room until you can play something.’ After one week, I came out of my room and played ‘House of the Rising Sun.’ My dad said, ‘OK, you can come out of the attic now.’ I told that story at his eulogy.”

In 1965, Amodie’s family got him a cheap acoustic guitar, but his aunt later got him an expensive electric guitar at Sam Goody’s on Chestnut Street. “This upset my parents because they had bought me the cheaper one, which was terrible. They wanted me to take lessons at the Water Tower, which lasted one week. I was playing ‘Twinkle, Twinkle, Little Star,’ but I wanted to play the Beatles and other pop music of the day, which I then did.”

In the mid- and late-1970s, Amodie began performing at The Depot in Chestnut Hill and five days a week in the now-defunct Fireside Lounge in the Marriott Hotel on City Line Avenue, as well as the Domino Lounge in Roxborough, Dori’s in Springhouse and Peter’s Apartment in Chestnut Hill.

From this point, Amodie auditioned for a band called The Tokens, which had just lost its lead singer. In 1961 The Tokens, four boys from Brooklyn, had recorded, "The Lion Sleeps Tonight" on the RCA label. The song, originally a Zulu folk song called "M'bube" and Anglicized to "Wimoweh," soared up the charts to become the number one hit in the nation.

Amodie got the job as the band’s lead singer and toured the world with them from the late 1970s to 1982. He then put together a band called Night Shift, which played Brittingham’s in Lafayette Hill regularly, at the Spectrum and was the opening act for such major league performers as Joan Jett, the Go Go’s and the J. Giles Band. Night Shift fell apart in 1990, however.

Amodie was later playing at a place called Ruhling’s on Rising Sun Avenue in the lower Northeast when the owner suggested putting on a “Frank Sinatra Night.” A clever impersonator since childhood (“I’ve always had that gift”), he was a big hit doing the Sinatra tribute, so he created an act called “Pal Joey,” a movie Sinatra starred in – and also fitting because his real first name is Joe. For the last 18 years, he has been doing “Pal Joey” at casinos like Harrah’s and Valley Forge, Whitemarsh and Plymouth Country Clubs, the Buck Hotel, Gianina’s in Woodbury, New Jersey, Glen Foerd Mansion in the Northeast, etc.

Recently, he has expanded the act to include impersonations of songs by Dean Martin, Nat King Cole, Bobby Darin, Elvis and Frankie Valli. He plans to add Johnny Mathis and Kenny Rogers in the near future. Called “Singers of the Century,” Amodie, who also has three dozen voice, piano and guitar students of all ages, will perform the act next on Wednesday, Nov. 6, 7 to 9 p.m., at Maria’s Ristorante, 8100 Ridge Ave. in Roxborough.

For more information, visit MariasRistoranteonSummit.com or call 215-508- 5600. (Amodie’s brother, Tom, is co-owner of Chestnut Hill Sports, 8628 Germantown Ave., and a former sportswriter for the Local.)