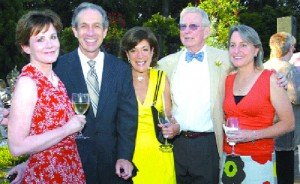 Were you able to score tickets to Los Angeles’ Dolby Center for the 88th annual Academy Awards festivities on Feb. 28? If not, there is an appealing alternative much closer to home.

The Philadelphia Film Society will mark the occasion with a gala evening on Oscar night at the Prince Theater downtown, replete with a red carpet, small bites and drinks, as well as the Academy Awards ceremony projected onto the venue’s big screen.

Chestnut Hill native, Ralph Hirshorn, is a former elector of the Academy of Motion Picture Arts and Sciences, which doles out the gold statuettes. He is also a current member of the Board of Directors of the Philadelphia Film Society. It provides Hirshorn with a significant perspective on the Oscars.

In 1959, while an undergraduate at Yale University, Hirshorn made a short subject distributed by Grove Press. He called it “an avant garde satire.” According to Hirshorn, “It was something of an underground hit.”

His university presented the film to the Screen Producers Guild for consideration for their Jesse L. Lasky Gold Medallion. At the ceremony, Hirshorn rubbed elbows with some screen luminaries. “I was presented with the award by Eva Marie Saint at a star-studded event at the Beverly Hilton.” He also met Gary Cooper, Jack Benny, Jack Warner and Kim Novak.

The student film served as springboard for Hirshorn. Columbia Pictures offered him a contract, which led to a few years in various positions — story editor, associate producer and assistant to the head of production.

Hirshorn was an Academy member for about 30 years. He reminisced, "When I joined, the studios still sent employees as proxies for their chosen Award prospects. The ceremony is not like going to anything else. The biggest problem is and was not being able to leave your seat, although now, if you are in one of the balconies, where I always was, you can depart during one commercial break and return after another. Starting a few years ago, there was a small bar for every aisle.

“The streets are blocked off for use by official cars only. It's best to allow as much as two hours to reach the theater. Although the favored mode of transit at $85 an hour when I last visited was black limousine, there are many luxury cars. The limos come from as far away as Las Vegas for the day. I chose to arrive in the Mitsubishi I rented at the airport. Hertz was proud!”

Hirshorn vividly recalled the 1960 Oscar race. “Columbia's misguided hopes were on ‘Pepe,’ a blatant ripoff of ‘Around the World in 80 Days,’ which had previously won the Oscar for United Artists. I assure you I did not vote for it.”

Following the death of his father, Hirshorn abandoned his promising Hollywood career and returned home so he could care for his mother and salvage the family's insurance business, the Hirshorn Company. This led to his resuming permanent residence back in Chestnut Hill.

In 1992, the Philadelphia Festival of World Cinema was started by International House, and Hirshorn was recruited to become a member of its Board of Directors. In 2001, the Philadelphia Film Society was formed and assumed the production of the festival and presented an ambitious array of other events. Since its inception, Hirshorn has served continuously on the successor organization’s Board of Directors.

“I have enjoyed its evolution from its creation and stewardship by the International House and its Board Chairman, Laurada Byers (a former Chestnut Hill resident),” said Ralph.

With regards to this year’s crop of Oscar nominees, Hirshorn indicated he was “quite happy. There are always some worthy misses. There were a few Foreign Language oversights that really surprised me. All in all, if the choices were as relatively even-handed then as now, I would not have quit the Academy.”

This year, some Academy critics have complained about the lack of diversity in the nominees, and some have advocated a boycott of the event. Hirshorn contended, “I think it's absurd to argue about diversity among the privileged few, especially after the Oscar was awarded to a film as mediocre as ‘Twelve Years a Slave’ as recently as two years ago. It strikes me almost as pandering when at the same time, thousands of blacks each year are unjustly pulled over by white policemen and humiliated and occasionally incarcerated."

In the past, Hirshorn has correctly predicted some long-shot contenders. “My best dark horse call was ‘Hurt Locker’ when all the money was on ‘Avatar.' This year all nominated features, in my view, deserved to be honored. Most are amazing, but my choice for Best Film Award would be ‘Spotlight.’ It gets it across the board, including the subject, which probably was for some, a turnoff, and for best original screenplay.”

The Philadelphia Film Society’s Awards Party and Screening will be at the Prince Theatre, 1412 Chestnut St., on Sunday, Feb. 28, 7 p.m.

More information at www.filmadelphia.org. Nathan Lerner, Director of Davenport Communications, sees over 200 feature films a year. He can be reached at lernerprose@gmail.com.

Mt. Airy author and labor expert 'On the Job' June 21