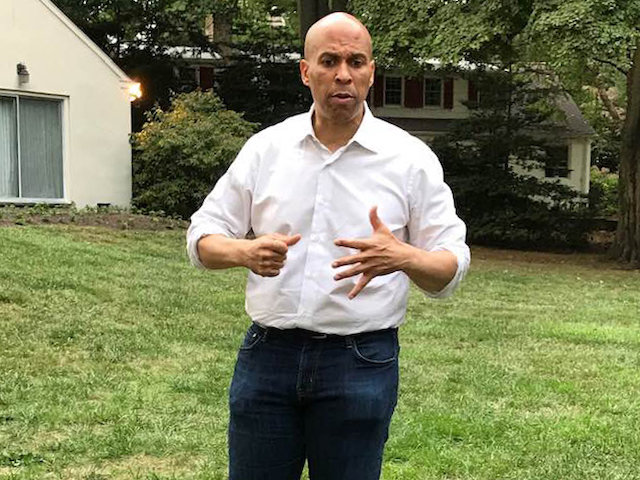 New Jersey Sen. Corey Booker, a candidate for the 2020 Democratic Party’s Presidential nomination, was in Chestnut Hill on Monday, Sept. 23, to meet with more than 50 community members at the home of Jason and Gingi Wingard.

The event was a fundraiser for the Presidential hopeful, in which he met with and spoke to more than 50 people at the Wingard home. Friends Betsy Torg, Mark Taranta and Anthony Mazzarelli were co hosts of the event. Torg was the former director of media relations and social media at Springside Chestnut Hill Academy.

Jason, a dean at Columbia University and Gingi, president of The Education Board Foundation, told the Local before the event that they decided to host Booker at their home in part because they had first participated in a similar event as guests of the late Peter Buttenwieser, a prominent attorney, Chestnut Hill resident and one of the biggest Democratic Party fundraisers in the state, who died last year. The couple recalled being invited to meet Barack Obama when he was running to represent Illinois in the U.S. Senate.

“I thought it was time for the torch to be passed,” Jason said. “Obviously, we can't carry [Buttenwieser’s] big torch. But it’s time for his vision for us to be more active and more engaged in politics to be realized.”

Jason said his connection to Booker is primarily through Stanford University. Both men earned undergraduate degrees at the school and played football there. Jason heard Booker speak recently at an event sponsored by alumni of the football program. He told his wife about Booker and encouraged her to see him. She got the chance earlier this year.

“I attended an event that Cory had here in Northern Liberties, and he was inspirational,” Gingi said. “And it was very exciting to hear his message of unity. And to hear his positivity in the face of an especially negative time in our, in our country. He said, ‘The power of the people is always bigger than the people in power.’ And that resonated with me. His approach was inspiring, I would say, for us to get politically active and to really get our butts in gear as Democrats.” 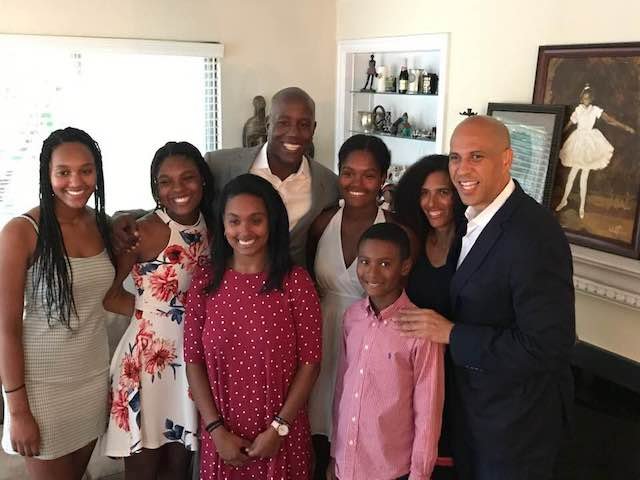 The Wingard family hosted Presidential candidate Cory Booker (right) at their Hill home on Monday. The Wingards and their five children (from left) Jazze, Joye, Jaelyn, Jason, Jaia, Jaxen and Gingi, posed with the candidate before he spoke in their backyard to more than 50 guests. (Photo by Kenny Holdsman)

So they began to plan the event, inviting their extensive network of friends and colleagues to their Chestnut Hill home. The couple have lived in Chestnut Hill for 18 years and are currently raising five children in the home. The main security concern was to keep the location of the event as private as they could. Entry to the event was $500. Sponsors who paid $1,000 were permitted a pre-event reception. The Wingards said that many people actually donated to send students and other community members who might not otherwise be able to afford it.

The Wingards said that, while the event was a fundraiser for Booker’s campaign, it was not supposed to be taken as a tacit endorsement. It was perfectly fine to attend, donate to Booker’s campaign because you believed he belonged in the race, not because you were planning to vote for him.

“Many of the people attending will have already made up their mind that they're voting for Joe Biden or Bernie Sanders,” Jason said. “They're coming, again, because this is an event, an intellectual discussion, an intimate introduction to Cory Booker, and a platform for exchanging ideas and asking questions. So It may be that some people are introduced to Cory Booker and decide they want to support him further. It may be that all the ideas that Cory Booker has about how we can improve this country will be transitioned over to some other candidates that people are endorsing and supporting. So either way, we're going to feel like we have done something in this political process.”

The Wingards said on Tuesday morning that the event had gone fantastically. Booker spoke to attendees and answered questions for more than an hour. It will likely lead to the Wingards hosting more candidate events in the future.

“Yes, we will be welcoming additional candidates in a variety of different forms … to expose members of our community to additional candidates, and not for the purpose of trying to persuade people to vote, but being better informed, being more knowledgeable,” Jason said. “Also to help build candidates who know more about what is on the minds of people in and around our community, because we have some specific and unique interests and concerns.”