You could say that the mission of St. Thomas Episcopal Church in Whitemarsh, one of the oldest in the nation at 324 years old, is saving a lot more than souls. 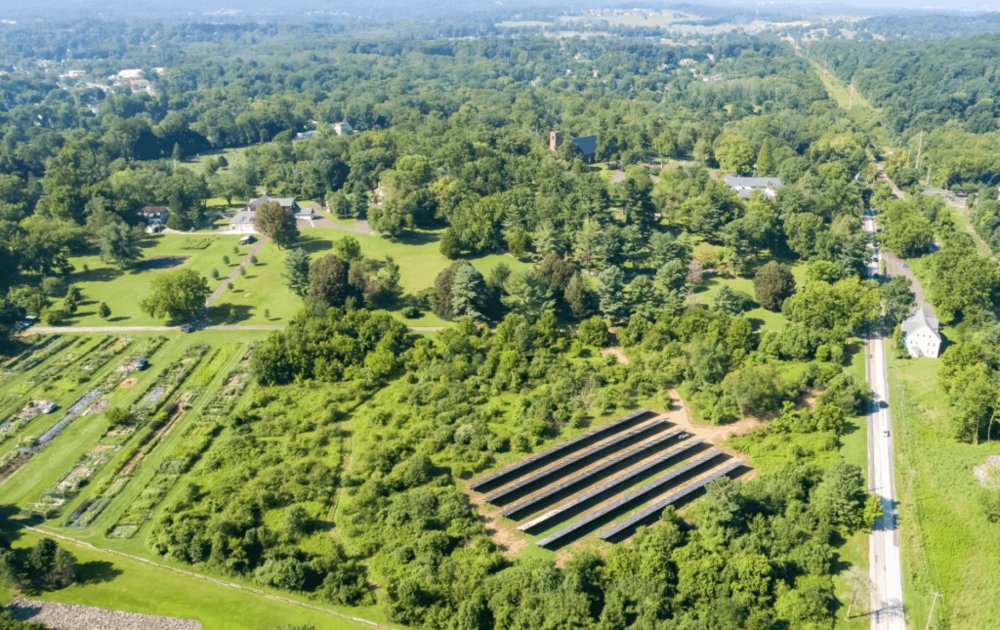 An aerial view of the solar panels at St. Thomas/Whitemarsh Episcopal Church.

The church has purchased more than 700 solar panels and is now raising funds by selling “virtual” dedication panels to congregants, who contribute $200 per panel to recognize a loved one.
Previous Next
Posted Thursday, June 30, 2022 12:00 am
by Len Lear

You could say that the mission of St. Thomas Episcopal Church in Whitemarsh, one of the oldest in the nation at 324 years old, is saving a lot more than souls.

The church's huge, recently installed solar panels, although expensive to purchase, are expected to save significant sums of money over the years and help support the environment by getting energy from the sun, rather than fossil fuels. They’re also an opportunity to enjoy nature, as the entire solar array is encircled by a nature walk.

All this is in response to “The Genesis Covenant,” an initiative started by Episcopal Church leaders that reaches all across the country.

The goal? To transition as many churches as possible to solar energy,  with the goal of reducing greenhouse gas emissions by 50 percent in the next 10 years.

St. Thomas Church approved its project in 2019. A year later, the congregation broke ground on a solar farm, nestled in the northeast corner of the campus. Currently, their solar array is projected to provide 85% of the electrical needs for the entire campus.

The church's Solar Panel Dedication Task Force includes Roger Clark, a longtime parishioner and retired attorney who had a career leading a number of clean energy initiatives; Emily Hunsicker, Rick Ward and Pam McKernan - all parishioners of St. Thomas and clean energy enthusiasts. They are currently focused on raising the funds needed to buy their last section of panels.

“The total number of physical panels purchased is more than 700,” McKernan said last week. “We're now selling 'virtual' dedication panels that allow folks to contribute to the cause and recognize a loved one for $200. The dedications thus far have been extremely touching.”

“Even more than that could be gained by changing from oil to natural gas,” Clark said during a recent Zoom interview. “We made the fencing big enough here to be able to add more panels.”

Pennsylvania law allows solar users to partner with PECO, and treat the electric grid as a battery, supplying energy back to the grid when the sun is powerful and tapping back into when it isn’t.

The church task force worked with a company called Solar Renewable Energy, based in Virginia, to finance and install the solar panels. According to the company's website, they are “focused on harnessing the power of the sun as a clean, renewable energy source resulting in reduced energy consumption, utility cost savings and a smaller carbon footprint ... for solar renewable energy systems.”

“I can't sing their praises enough,” McKernan said. “They have been outstanding. So far, it is working like a charm."

Parishioners who donate $200 for one panel get to dedicate it to loved ones. The dedications are public, on display via an interim poster. “In Memory of our Daughter, Cathy, who died in May, 1962, Bill & Cassie Ross,” reads one dedication. Another is “To our grandchildren, Wesley, Josephine and Johan. They are the future. From Nana & Pop-pop.”

At the conclusion of the fundraising drive, a permanent exhibit will be created.

The solar panels have also become an educational vehicle for teaching the church's nursery school students the merits of renewable energy.

“No, our panels will not end global climate change,” McKernan said, “but it is a good thing for the environment and a material step in the right direction. It is a demonstration of faith in action. And that is something to be insanely proud of.”

For more information or to donate, visit stthomaswhitemarsh.org/solar. Len Lear can be reached at lenlear@chestnuthilllocal.com