Dining For Women had a dinner at From Bali to Bala, a pop-up store at Germantown and Evergreen Avenues in November. Owner Laura Cohn (right), a devoted member of the Thursday DFW chapter , donated … 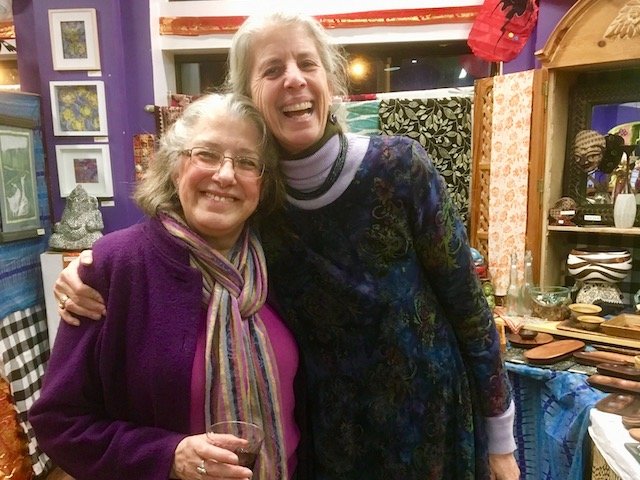 Dining For Women had a dinner at From Bali to Bala, a pop-up store at Germantown and Evergreen Avenues in November. Owner Laura Cohn (right), a devoted member of the Thursday DFW chapter , donated 10% of that night’s purchases to DFW. Seen with Cohn is Ann Mintz of Mt. Airy.[/caption]

by Len Lear and Barbara Sherf

During this holiday season there will be pigouts in many area homes and quantities of food consumed that would have made King Henry VIII blush. But one group of area women, members of a nonprofit called Dining for Women, will be dining not for any sensory overload but to help those in the world who rarely have enough to eat.

There are currently 492 DFW chapters in the U.S. and at least 10 in the Delaware Valley, including three in Northwest Philadelphia and one in Ambler. They are known as the Weavers Way “quadruplet” chapters, made up of members from Mt. Airy, Chestnut Hill and the surrounding suburbs, and they have raised more than $213,000 since their founding eight years ago.

“Our chapters directly donate food monthly to St. Vincent’s Church in Germantown through Face to Face,” said Betsy Teutsch, mid-60-ish resident of Mt. Airy. “We also collected and delivered gifts of toiletries to homeless families at Stenton Manor. A group of members, headed by Margaret Guthrie, just completed a patchwork quilt which has raised more than $5,000 for the Women’s Law Project. The group is independent, but it’s women who know each other from Dining For Women.”

Dining for Women, founded in 2003 by two activists in South. Carolina, is “a global giving circle dedicated to transforming lives and eradicating poverty among women and girls in the developing world and in the U.S. Through member education and engagement, as well as the power of collective giving, Dining for Women funds grassroots organizations that empower women and girls and promote gender equity.”

Every three years, Dining for Women selects projects that have been previous beneficiaries of funding as monthly Featured Grantees to receive sustained funding. Sustained Grantees receive a total of $75,000 – $25,000 in each of the three years. In 2019 grants have been made to women’s organizations in Tanzania, Niger, India, Mauritania, Kenya, Afghanistan, Pakistan, Uganda, Nepal and Swaziland.

Each chapter meets monthly, hosted by a member.

“By now, we have become friends,” Teutsch said, “so there’s a lot of catching up and sharing. Members bring delicious food and drink to share together; sitting around a table sharing a meal with like-minded people is a big part of the magic. Then a member presents the Featured Grantee, and we learn a lot about the specific country and region, its problems and challenges and the solutions our grantee has developed. It’s heartening. Each of us values the difference our collective contributions make in the real lives of girls, women and communities.”

In August, the four local chapters meet for a dinner at the Ambler Weavers Way. It’s open to the public and often helps to bring in a new member or two.

“In December, we bring our four chapters together for a holiday fundraiser for Dining For Women’s Annual Fund,” Teutsch said. “This year the magnificent musicians Kenny Ulansey and Dave Posmontier donated their talents for a fabulous mini concert.”

For January, the grantee is GAIA Vaccine Foundation, a Providence, Rhode Island-based organization that collaborates with West African physicians and provides support for prevention-related clinical activities in the region. The foundation’s mission is to reduce the incidence of infectious diseases that disproportionately affect women and their families in the developing world and to promote the development of globally relevant, globally accessible vaccines.

Each chapter meets individually 10 times a year. At each meeting there are usually 12 to 18 members present.

“None of our chapters want to outgrow home hospitality, so two have closed to new members,” said Teutsch. “Thursday and Monday Ambler are still happy to welcome more. The Thursday group occasionally meets at 520 Carpenter Lane’s Nexus co-working space, a wonderful venue in Mt. Airy!”

At a previous meeting, Bernadette Cronin-Geller, a Roxborough peace activist and former nun, asked members to share a transition that had taken place in their lives that had not been celebrated. Several members talked about divorce, and while it was a huge transition, there really wasn't a celebration of a woman's decision to leave a relationship.

"This is the kind of conversation that women need to have, and that's why I like this group so much," said Wyndmoor resident Flo Geller. "It's not about fashion or the latest cruise, but it's about helping other women and learning more about global issues affecting us all.”

Sue Hoffman echoed those comments. "I’ve learned so much about the struggles women in developing countries face and how they are coming together to change their lives – going to school, learning about their bodies and health, starting small businesses, growing their own food. It gives me a lot of satisfaction knowing I am contributing to the empowerment of women and girls around the world."

"I love the concept of giving in a circle … And it's not all serious; we do laugh and have fun."

The Weavers Way Ambler chapter of Dining for Women welcomes all to learn about the group at a gathering the evening of Martin Luther King Jr. Day on Monday, Jan. 20, at the Free Library of Springfield Township. More details at 215-872-2536.

Visit DiningforWomen.org for more information. Len Lear can be reached at lenlear@chestnuthilllocal.com

The art, the music, the neighbors