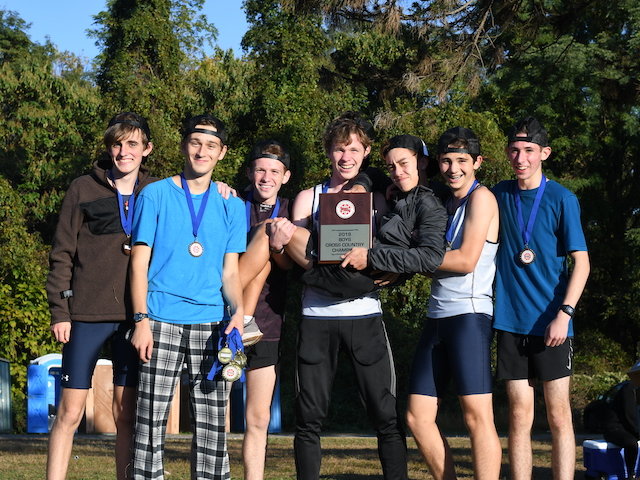 Athletic coaches often give a speech touting the concept, “There is no ‘I’ in ‘team.’” Because of the individualistic nature of the sport, however, cross-country teams rarely embody this message. The Germantown Friends School boys’ cross-country team tells a different story. Across all seven starters of their boys’ varsity squad, not one runner stands out – all seven do.

At the Friends Schools League Cross Country Championships held on Tuesday, Oct. 15 at the historic Belmont Plateau, five out of the top 10 finishes went to GFS runners. Senior Ben Rosin, team captain, came in fourth with an average 5:31 minute per mile pace, junior Theodor Raven finished fifth at a 5:33 per mile pace, junior Bobby Lynam finished seventh at 5:37 per mile, junior Matthew Goldberg finished eighth at 5:41 per mile and senior Charles McManus came in 10th at a 5:46 per mile pace.

That five out of their seven runners finished in the top 10 in the league championships speaks to the team’s depth of talent, culture and comradery.

“I felt like we were all operating at our fullest capacity and working in tandem to achieve victory,” Rosin said.

Although GFS graduated five of their strongest runners last year, they managed to rebuild, find their stride, gel their young team and come back to best every school. The GFS varsity boys went 7-0, undefeated in the Friends School League this season.

In addition to their impressive statistics, the GFS runners have received numerous honors and awards as well. Four of the seven starters – Goldberg, Lynam, Raven and Rosin – were selected to All-League First Team, with teammates Simon Donovan, McManus and Henry Perine receiving All-League honorable mentions.

When asked to what he attributes the continued success of the GFS cross-country program, Conrad Haber, head coach of the program for four years, simply said, “Development.

“Each runner is provided with an opportunity and the space to learn and grow at their own pace,” he said. “As the athletes work within a challenging and supportive training environment, they become engrained with the values that serve as the foundation of the team.”

Rosin exemplifies this coaching approach that allows and encourages growth, development and improvement over time. As a freshman, he ran a 21-minute 5K – or a seven-minute per mile pace. This year, his best 5K time was 16:26, or a 5:25 minute per mile pace. Within four years at GFS, he shaved nearly two minutes off his average mile time.

Rosin’s story is one of many compelling ones on the team. Each member of the starting seven shaved time and set impressive personal records this season. Rosin credits the team environment for his success.

“Having teammates that pushed me to work as hard as I could helped me improve over the course of my high school career,” he said.

At an average pace of 5:30 per mile, they could keep up with each other when no other team or individual in the league consistently could.

All arrows point to the GFS cross-country program continuing its 18-year league winning streak for many years to come. Clearly, the GFS approach is working; there is no “I” in this team.