In the summer basketball league it is hosting, Germantown Academy saw its own team climb to a 4-0 mark in the second week of competition. 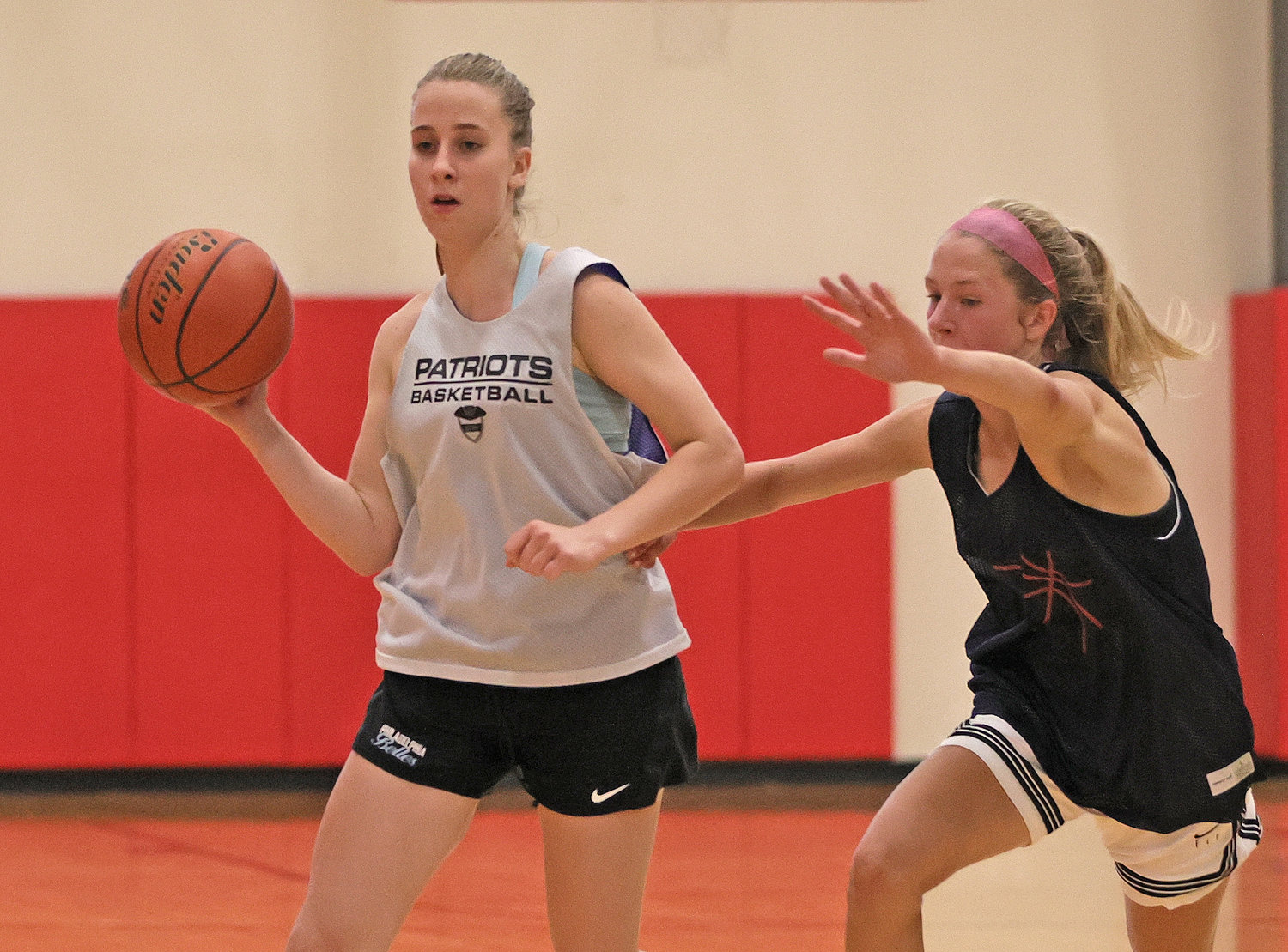 Junior Sam Wade gets a pass away to a GA teammate while pressured by a Central Bucks East defender.
Photo by Tom Utescher

Jessica Kolecki, a Patriots sophomore, launches a jumper from the wing.
Photo by Tom Utescher
Previous Next
Posted Wednesday, June 29, 2022 12:00 am
by Tom Utescher

In the summer basketball league it is hosting, Germantown Academy saw its own team climb to a 4-0 mark in the second week of competition, but the two latest victories did not come as easily as the first two.

The Patriots trailed Council Rock South High School by double digits before rallying in the second half to prevail, 51-48, and in the next game Germantown only led Central Bucks East by four points going into the final minute. Two late GA buckets set the final score at 50-42.

First up, C.R. North stepped out to a 5-0 lead, but GA answered with eight straight points as rising junior Sam Wade and sophomore Jessica Kolecki each put in a pair of lay-ups. The Hawks had scored an early three-point field goal, and now they continued to strike from beyond the bonus loop to retake the lead.

Good ball movement on offense also led to baskets from closer range for Rock South, and GA found itself behind 31-17 at halftime, when sophomore Gabby Bowes led the Patriot scorers with five points.

Junior Jessica Aponik registered her first basket of the night to start the second half, but a free throw and a lay-up by the Hawks widened the gap to 15 points. Germantown's revival began with Kolecki scoring off a steal and Wade hitting a mid-range jumper and then a three-pointer.

Incoming freshman Addie Levensten and junior Izzy Casey got in on the scoring for the Pats, but it wasn't until 90 seconds remained that GA went into the lead (47-45) with a short jumper and attached free throw by Wade.

C.R. South responded with a traditional three-point play of its own, then Germantown edged ahead once more with a shot from the left baseline by Kolecki.

The Hawks turned the ball over by stepping out of bounds, and in a transition sequence Wade assisted Aponik for a lay-up that made it 51-48. With just a few seconds left C.R. South called time-out, then missed a jump shot at the end.

Wade and Kolecki led the winners with 16 and 11 points, respectively, while sophomore Cee Jay Thomas added seven points and Aponik had six. Thomas, who missed the first night of the league due to a family event, brought some needed size and strength in the paint for last week's games.

Most of the scorers from the first game found the basket early in the second contest, along with Aponik's twin sister, Jenna. GA appeared to be gaining control with a 17-10 lead late in the first half. However, C.B. East (also nicknamed Patriots) narrowed the gap to five points (21-16) by halftime, and then got within two points several times early in the second period.

Three-point buckets from Bowes and Jessica Aponik helped spread the score to 40-33 with under eight minutes to go, but when a time-out was called with 1:49 on the clock the Bucks County club was just four points behind, at 44-40.

Kolecki canned a 15-footer, but West got those points back on two free throws. In the final minute, Wade scored in transition and then added another lay-up, locking in the final score at 50-42 as she recorded another game-high effort, this time with 14 points.

Bowes, who got all of her points from either the three-point line or the foul line, was next with 10 points, followed by Thomas with eight points and the Aponik sisters with seven points apiece.