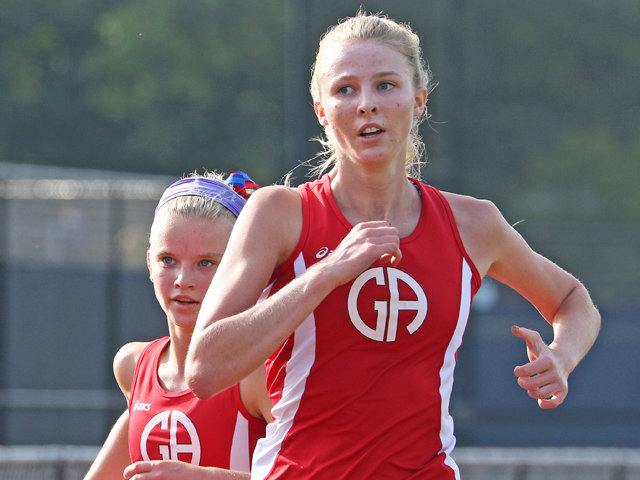 Three scorers and two other runners from the GA squad that rolled to the 2016 Inter-Ac team championship are back in action, and other athletes are rising up to add to the team's depth.

Senior Kelsey O'Hara, who placed eighth at the league meet last fall, sat out Tuesday's race due to a minor ailment, but the Patriots were still able to register a shutout, winning 15-44 by sending five runners across the line ahead of sixth-place Liz Moore, a sophomore who led the visiting Blue Devils.

Abbe Goldstein's sister Issy, now a sophomore, won easily in 19 minutes and 56 seconds, followed by another scorer from last year's championships, fellow 10th-grader Gianna Murgia (20:51). A minute after Murgia, senior Anna Hennessy gave GA third place, while junior Charlotte Rapp, new to the X-C squad, squeezed in just ahead of sophomore Katie Sands. Rapp was fourth in 22:51.1, and Sands rounded out the Patriots' perfect team score with a fifth place outcome in 22:51.4.

One of SCH's graduation losses was 2016 number one Rebecca Saunders, who came in 17th at the Inter-Ac meet to spearhead the Blue Devil contingent. Moore and current senior Haley Unthank placed 23rd and 24th overall last fall, and on Tuesday Moore nabbed sixth in 23:05 while Unthank came in eighth (23:47). 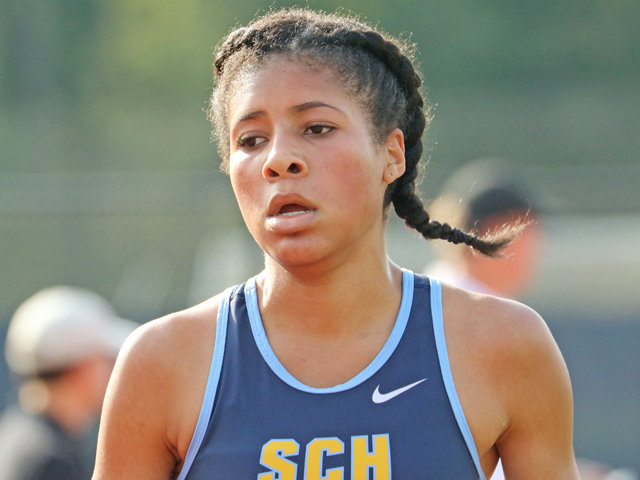 Senior tri-captain Haley Unthank was one of the top finishers for Springside Chestnut Hill last week at GA. (Photo by Tom Utescher)

Another SCH runner finished in between them; senior Allie Kitchell, who had not run cross country since her freshman year, landed in seventh place in 23:17. Both Kitchell and Unthank are better known as very talented track sprinters.

In Tuesday's overland action two GA runners rounded out the top 10; senior Sydney Sciascia (who ran in the 2016 Inter-Ac varsity meet) placed ninth in 23:58, and sophomore Mackenzie Pasquarella took 10th in 24:37. Sciascia and O'Hara are Germantown Academy's team co-captains for 2017.

In 11th place was the fourth finisher for SCH, junior Lilly Forrest (24:48), and GA claimed the next two spots thanks to sophomore Molly Oeth (a basketball forward in the winter) and junior Zoe Torrey. They were timed in 25:17 and 25:25, respectively.

The fifth scorer for the visiting Blue Devils was sophomore Zoe Thistle, who clocked in at 26:28 for 14th place overall. A former SCH student, Thistle tried Penn Charter briefly, but now is back with the Blue Devils. Senior Paige Aloise, who is a team captain for the Blue Devils along with Unthank and Forrest, placed 16th in the race in 26:42.

While this meet was going on, the other league team on this side of the Schuylkill, Penn Charter, was also in action. Hosting an Inter-Ac tri-meet down at Belmont Plateau, the Quakers creamed both Episcopal Academy (20-41) and the Academy of Notre Dame (15-44).