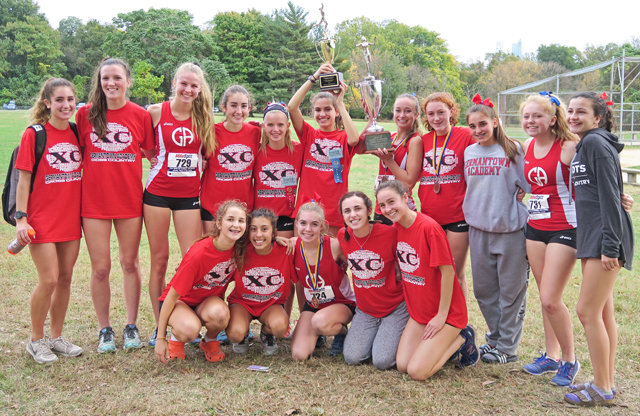 After repeating as league cross country champions, the Germantown Academy girls pose with the Inter-Ac trophy. (Photo by Tom Utescher)

Germantown Academy and Penn Charter have a long and storied sporting rivalry, but it's not every year that their girls' cross country teams are the top contenders for the Inter-Ac League title.

After the PC Quakers upset the defending champion GA Patriots in a dual meet and both teams smoked the rest of the competition in the 2017 regular season, it was clear that this season the league meet at Belmont Plateau was likely to end in a one-two finish for these two schools.

Both of them came away with something to brag about following the October 23 showdown in Fairmount Park. Freshman Emma Zwall, a new student at Penn Charter who went undefeated in dual meets, won the race in 19 minutes and 15 seconds, but it was GA that would take the team title, scoring 34 points to Charter's 42.

Between them, the two schools scooped up 11 of the top 16 places overall, and GA, led by sophomore Issy Goldstein's second-place performance (19:43.80), had four runners among the top seven.

"The girls just ran so smart and so beautifully," said longtime GA head coach Judy Krouse. "The pack really came through for us today. I think the JV set the tone for us with a one-two finish in their race."

The young Zwall arrived on the Penn Charter campus in September with her 11th-grade sister Abby, who placed fourth at the Inter-Ac meet in 20:51.3.

"It's very nice there, a lot different than my old school," said the lively, diminutive freshman, who enjoys social studies and likes to draw. "I'm really excited because it's my first year of high school and I feel like I'm already doing great in academics and running. We became a really close team very quickly; I feel like I've been there forever."

In second, GA's Goldstein was followed across the line by Episcopal Academy junior Caitlin Jorgensen (20:20.3), who also placed third in 2016. The Patriots then sewed up fourth, fifth and sixth place thanks to sophomore Gianna Murgia (21:18.8) and seniors Kelsey O'Hara (21:21.2) and Anna Hennessy (21:28.1). Sophomore Gabriela Manosis rounded out the scoring as she crossed the line 14th in 22:28.4, and for good measure, GA had junior Charlotte Rapp (a first-year runner) take 15th in 22:33.7. 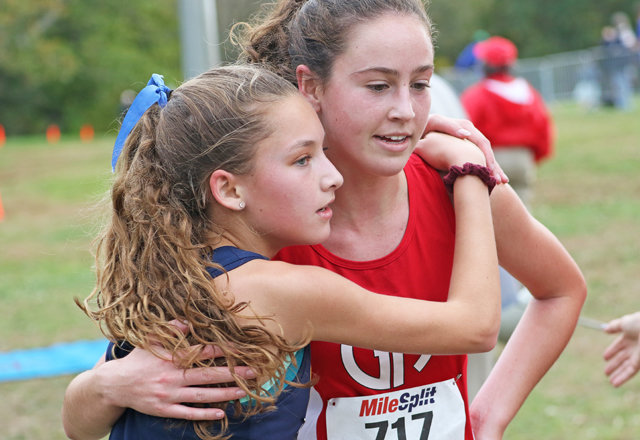 With 83 points in the team scoring, Episcopal placed third, and Academy of Notre Dame was fourth with 99. Led by sophomore Elizabeth Moore (17th; 23:23.6), Springside Chestnut Hill Academy was the fifth-place team with 117 points, coming in ahead of Agnes Irwin (123) and Baldwin (187).

Back in the middle of September, Penn Charter had served notice on defending champ GA by winning a dual meet on the Patriots' home course, 23-32. Still, this was not enough of a gap to cause Germantown to give up hope of repeating as champion in the Inter-Ac, and the Pats had not been at full strength for this head-to-head encounter.

GA's Hennessy did not participate in the dual meet, and O'Hara, while cleared to run, was still not completely recovered from a knee injury. Both seniors would place in the top seven at last week's championships.

"We knew we would run better than in the dual meet," Coach Krouse said. "We didn't necessarily expect this result today; we thought it might come down to one or two points."

In 2016, in Andy Zuccotti's third season as Penn Charter head coach, the Quakers finished fifth at the Inter-Ac meet, but had some promising young runners coming back. These veterans upped their game this fall as the Zwall sisters brought fresh talent and enthusiasm to the program.

Early in October, Emma Zwall turned in a time of 18:15 in an invitational held on a course that was somewhat flatter than Belmont, which serves as PC's regular home course. In her last regular-season race on the Plateau, she ran 19:15, the time she would reproduce at the championships.

The night before a big race, she revealed, "I eat pasta, lots of pasta."

Both Charter and GA enjoyed success in the races that proceeded the varsity events last Monday. The Quakers won the middle school race, and the Patriots saw senior Sydney Sciascia and sophomore Katie Sands take first and second in the junior varsity contest.

The varsity race was soon underway, and Zwall was already ahead by about 30 meters as the runners ran along the crest of the first hill of the course. GA's Goldstein and EA's Jorgenson picked up speed on the downslope, though, and as the leaders completed the first loop past the eventual finish line, they had halved the gap between themselves and the PC freshman.

In the hilly middle section of the course running through the woods, Zwall moved away again.

"I just run how I feel," she said. "In the woods, I feel more comfortable on the hills because I think that's my strong point."

When she came out of the trees to begin the last loop of the open section of the course, it was clear she was in command.

Before the race, the runners had been required to tie an electronic tracking chip onto their running shoes.

During the race, Zwall reported, "My shoe came untied - the one with the chip. It was pretty scary, but it stayed on."

A year earlier at Belmont Plateau, Issy Goldstein's older sister, Abbe, won her fourth individual league championship. She has moved on from GA to run for Harvard University, and it appears the torch had been passed to a new generation of young, talented Inter-Ac athletes.

At the awards ceremony following the race, there was a special treat for Zwall and the other individual award winners, as their medals were handed them by 2016 U.S. Olympian Ajeé Wilson. Springside Chestnut Hill boys' assistant coach Dante Zappala had enlisted the services of Wilson, who is the current United States record holder in the 800 meters.