Last Friday, The Hunt for Red October ended at Germantown Academy. This wasn't a tale about underseas nuclear adversaries, but one involving two schools whose primary team color is red, and who met on the field hockey turf at GA on October 1. 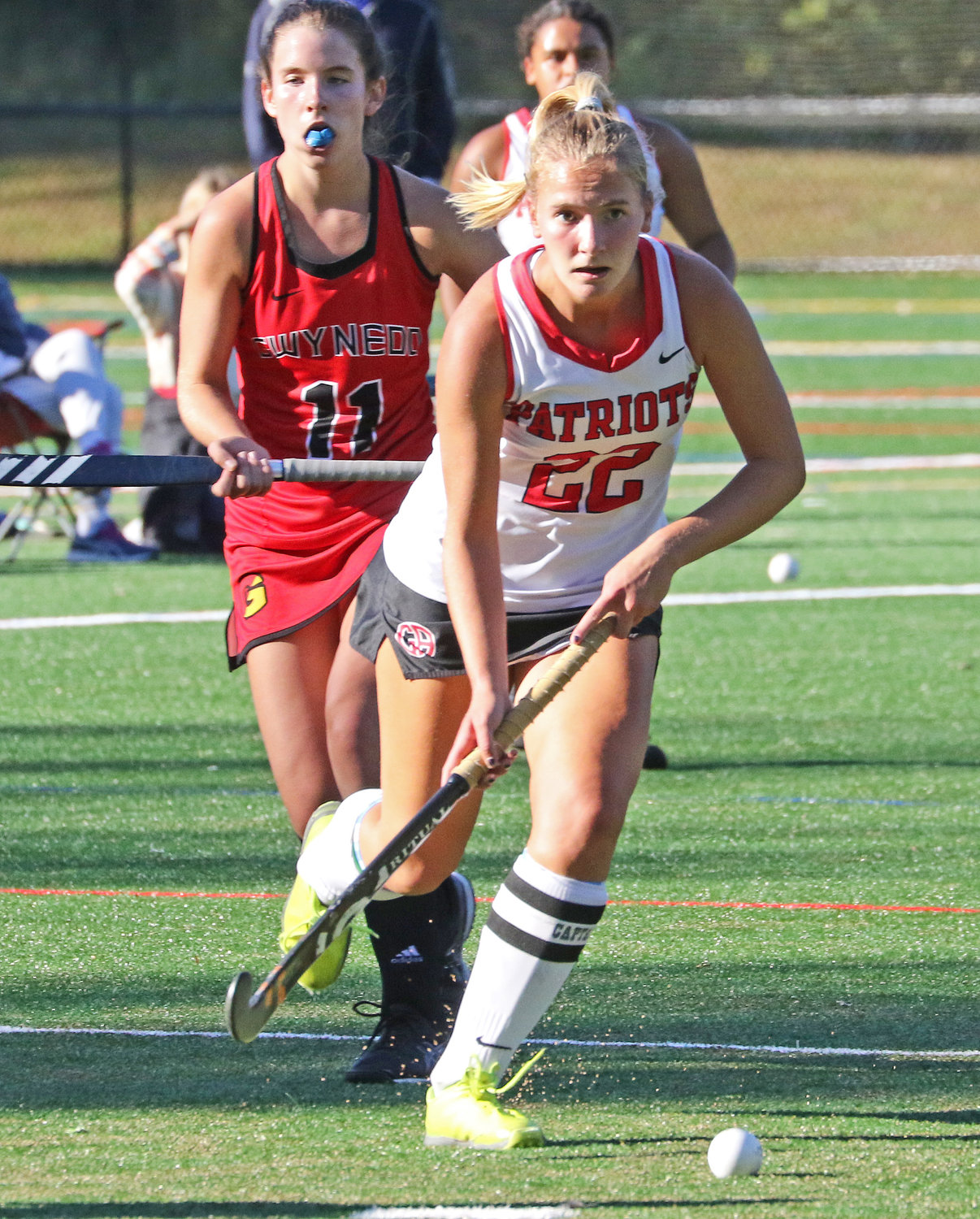 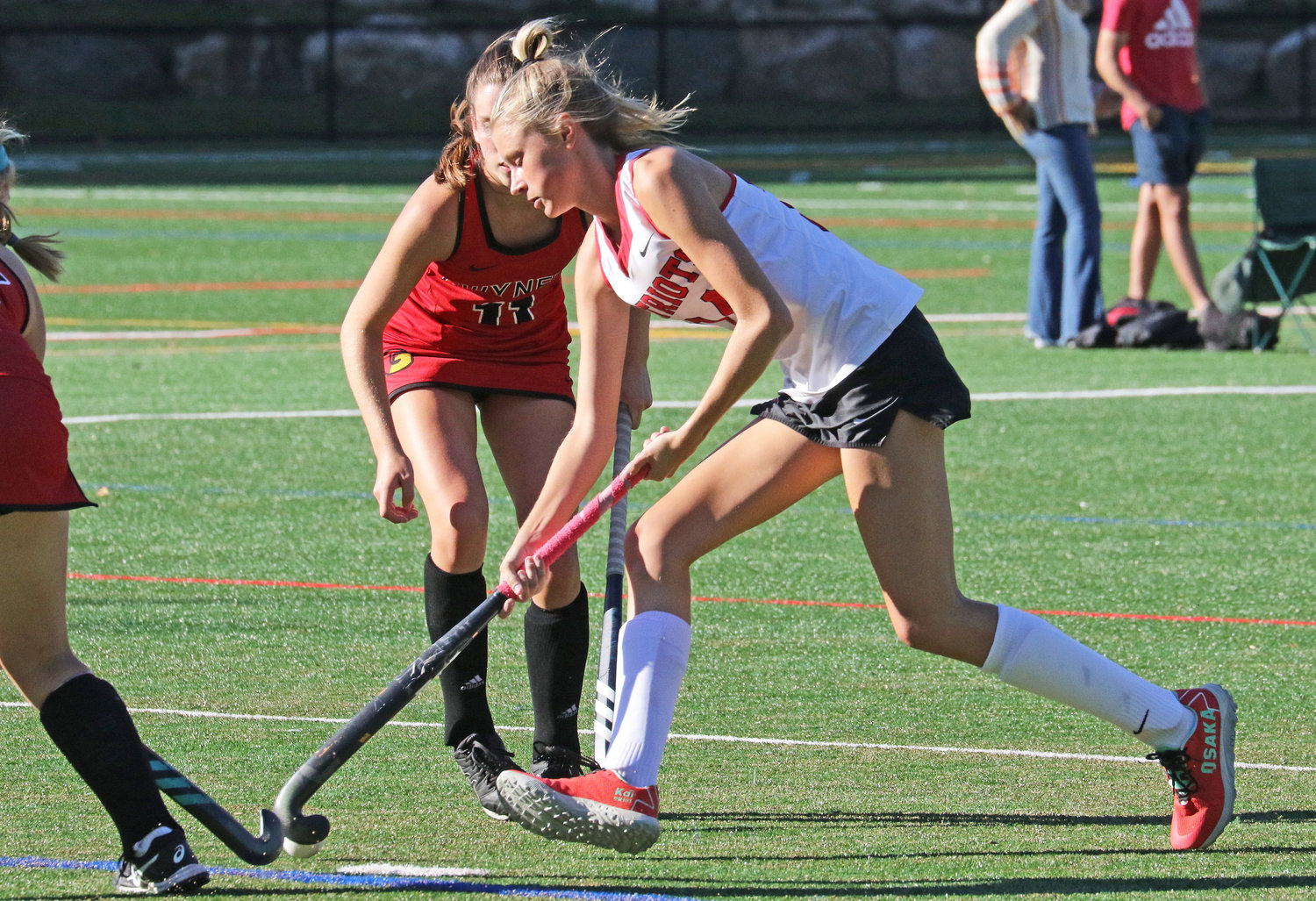 Last Friday, The Hunt for Red October ended at Germantown Academy. This wasn't a tale about underseas nuclear adversaries, but one involving two schools whose primary team color is red, and who met on the field hockey turf at GA on October 1.

The Patriots had come into the match with an overall record of 2-4, and with a mark of 1-1 in the Inter-Ac League that reflected a win over Springside Chestnut Hill Academy and a loss to league-leading Episcopal Academy. The Patriots' senior co-captains this fall are Bri O'Hara and Sydney Cameron (who will play hockey at Wesleyan University).

Gwynedd arrived at GA with a record of 7-2. The Monarchs were sitting second in the Athletic Association of Catholic Academies, having lost in overtime to number one Villa Maria (which in turn had lost a non-league match against EA, 4-2).

Last Friday Gwynedd sophomore Ava Huntley scored just 31 seconds into the action, and with 8:39 remaining in the first quarter she struck again, notching what proved to be the game-winning goal. Both markers came either directly or indirectly off of Monarch corners (there were eight in the opening period).

A minute after the visitors went up 2-0, GMA junior Sydney Mandato converted on a reversed stick shot. Later, when Gwynedd inserted the ball high in the left side of the circle on another corner play, senior Alaina McVeigh slammed the ball down into the GA backboard. Coming with 3:50 still to go in the opening quarter, it would be the first of four goals driven into the Patriots' pen by McVeigh, who'll be heading to Duke University.

Germantown played much better in the second quarter, affording the visitors no penalty corners while earning five of their own. The Patriots were unable to put the finishing touch on any of these opportunities, though. Gwynedd increased its lead to 5-0 for halftime, with junior Ella Saxon scoring with 4:46 remaining in the second round.

The Monarchs reasserted their dominance after the intermission, scoring another five goals. GA's regression to a submissive posture did not please Jackie Connard, the Patriots' head coach.

"We came out really flat in the first quarter, and gave up eight corners and four goals," she noted, "then in the second quarter they had no corners, and we had five. It shows you, yes, Gwynedd is a talented team, but we could run with them if we played to our potential."

After halftime, Gwynedd's response to GA's second-quarter aggressiveness led to a goal by McVeigh off of a corner play just over a minute-and-a-half into the third quarter. The Pats were finally able to break up the GMA shutout with under five minutes left in the period. Dribbling around and past several Monarch defenders, junior Claire McMichael put the home team on the board.

With three minutes remaining, Gwynedd's Huntley completed a personal hat trick, sending her squad into the fourth quarter with a 7-1 advantage. The visitors would score three more times, the first goal coming from junior Caroline Fitzgerald, and the other two from McVeigh.

In the final moments of the contest, GA's McMichael launched another promising shot, but Gwynedd keeper Lilly Sweeney stopped it for her fifth save of the day. In the Patriots' goal cage, sophomore Madison Destefano recorded 16 saves.

The leagues in which the two teams play took very different approaches in coping with the COVID-19 pandemic back in the fall of 2020. GA's Inter-Ac League initially announced the cancellation of the entire fall season. It later reversed course, arranging a limited number of games in late October and early November.

The Athletic Association of Catholic Academies, on the other hand, conducted a full double-round of league games in fall sports, as in a normal season. There was also postseason play in Pa. Interscholastic Athletic Association tournaments. Provisions were made for the AACA's Nazareth Academy, located within the City of Philadelphia, to play designated "home" games outside of the city.

As GA's Connard noted, "It feels like we've been trying to build back after almost two years off, and it feels like a really young team because we didn't really have the team experience last year due to COVID."