A storybook soccer season came to an end for the boys of Germantown Academy last Wednesday afternoon, when a 10-game win streak for the Patriots ended with a 4-2 loss in the championship game of the … 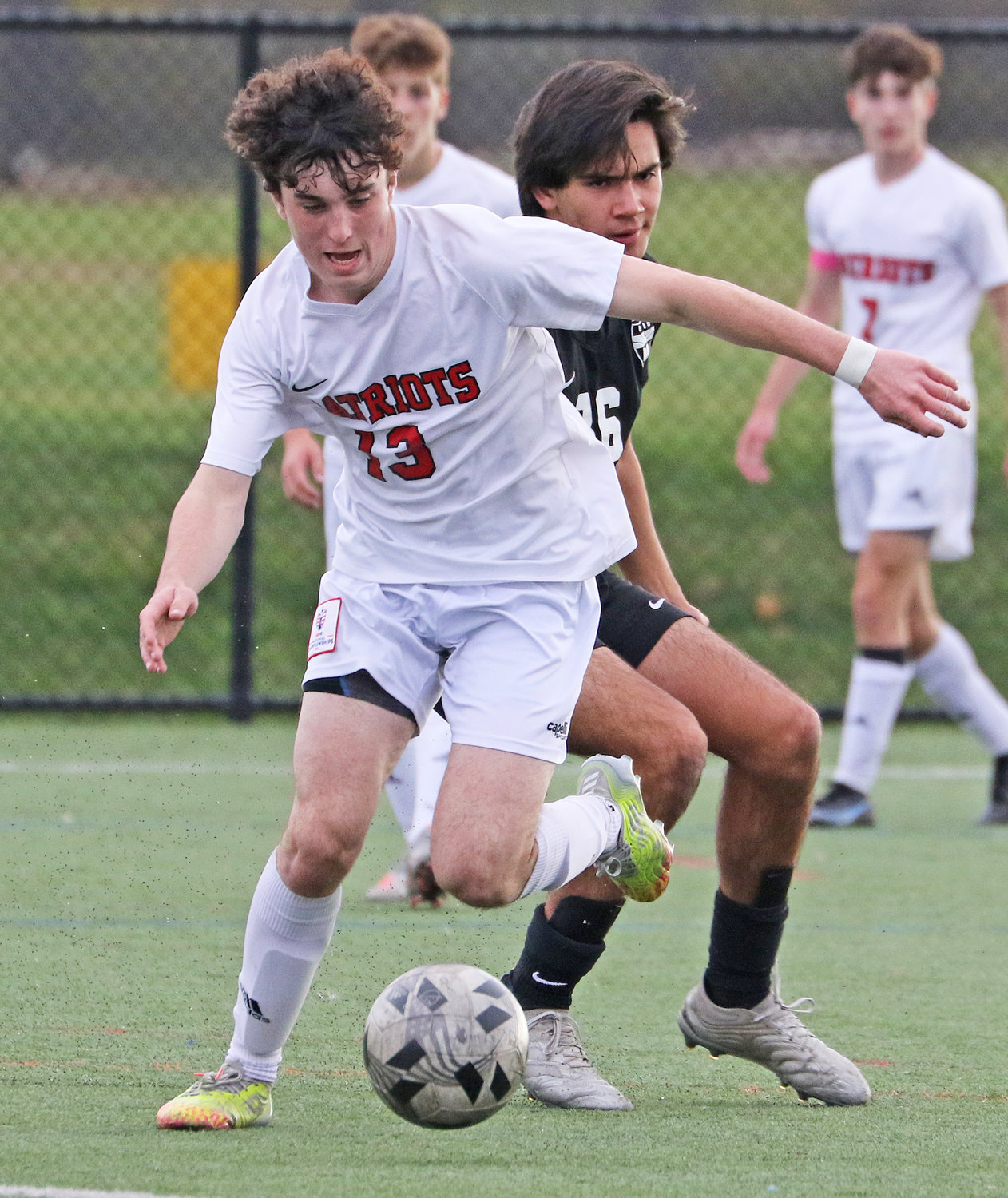 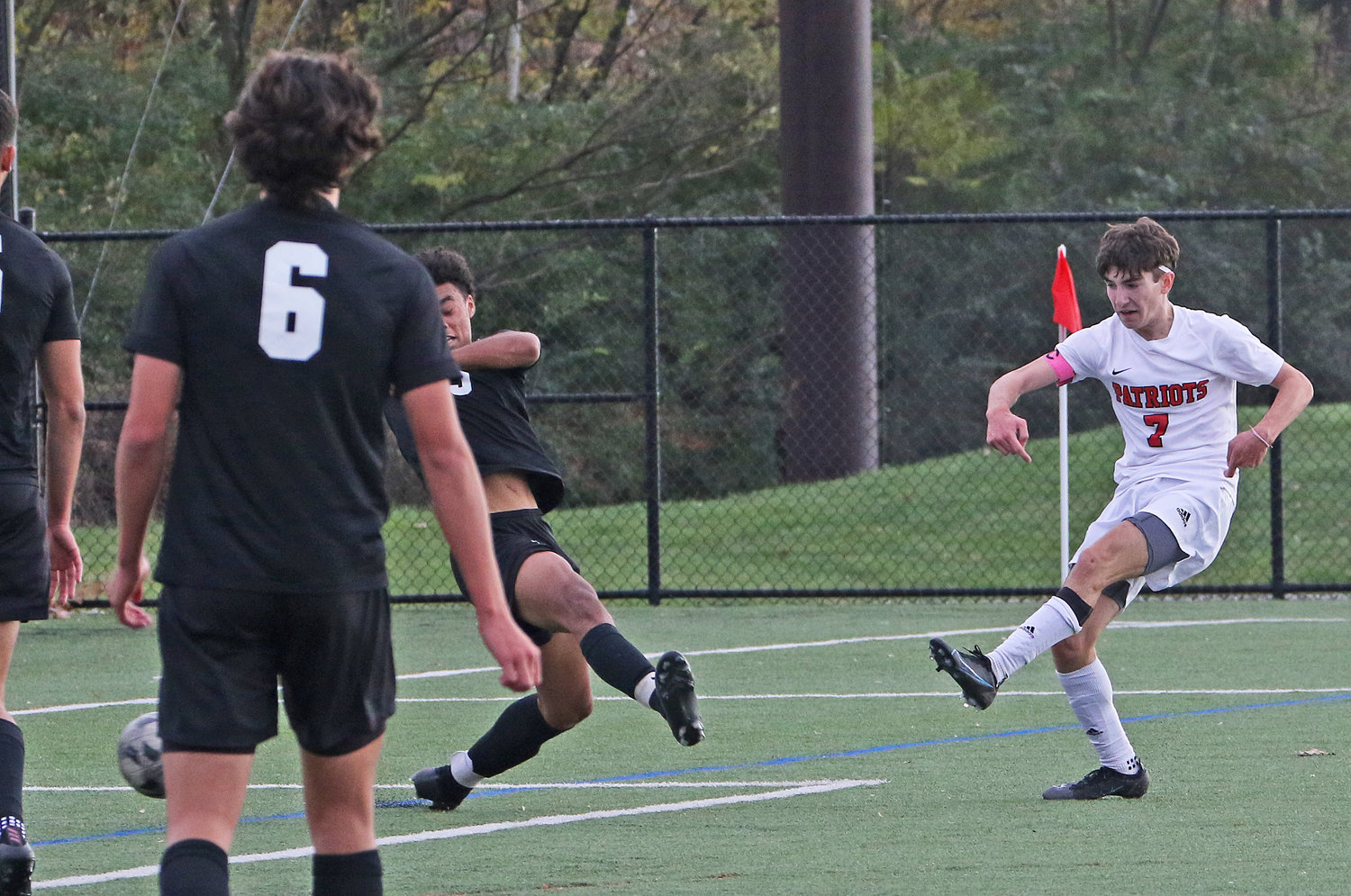 From outside of the right post, GA senior Sean Lipschutz (right) shoots the ball (lower left) past a Kiski School defender for the Patriots' first goal in Wednesday's final.
Tom Utescher
Previous Next
Posted Monday, November 22, 2021 6:00 am
by Tom Utescher

A storybook soccer season came to an end for the boys of Germantown Academy last Wednesday afternoon, when a 10-game win streak for the Patriots ended with a 4-2 loss in the championship game of the Pennsylvania Independent Schools tournament. At The Proving Grounds outside of Conshohocken, third-ranked GA fell to top-seeded Kiski School, from Western Pennsylvania.

The Kiski Cougars broke out of a 1-1 halftime tie with a pair of goals around the middle of the second period. GA made it a one-goal game with a strike in the final 10 minutes, but the last goal would not be the equalizer for the Patriots, but rather an insurance goal for Kiski.

Before this, the only losses on the Patriots' record came in their first two outings in the Inter-Ac League. Early on, they had won seven non-league contests, and after the two league setbacks they came back to claim the school's first Inter-Ac championship since 2009 with a mark of 8-2 in league play.

The two teams that had bested GA in early October, Episcopal Academy and Springside Chestnut Hill Academy, were the two teams that the Patriots defeated in the PAIS quarterfinals and semifinals in order to reach the championship game. Under fourth-year head coach Kurt Wetzel and longtime assistants Mike Torrey and Matt Rominger and GA grad Frank Koons, Germantown Academy posted an overall record of 17-3 in 2021.

With almost all of its students boarding on campus, Kiski is the only independent school in western Pennsylvania that does not belong to the Pa. Interscholastic Athletic Association. It accepts post-graduate students, and the student body includes boys from 23 countries.

The Cougars (13-2-1), who had travelled to the Philadelphia area the day before the PAIS final, were clearly the physically larger team.

The smaller GA squad owed its success to speed, athleticism, ball skills, and dogged persistence. For the finals, though, the Patriots would be missing junior starter Eli Torrey (son of Coach Torrey). At GA and Penn Charter's annual all-sports day the previous Saturday, Torrey and a PC player had received red cards, which entailed a suspension from the next game played.

On Wednesday the Cougars would get two of their goals, including their first, from junior Donovan Phillip, an imposing left-footer from the Caribbean island nation of Santa Lucia.

Germantown Academy attacked early in the game. A threatening charge up the middle by junior Nick Venziale was cut off by a Kiski back, and off of a Patriot corner kick, a header by senior Brett Rabbiner was saved by Cougars keeper Aitor Lopez, a senior from Spain.

A little later, a goal kick by Lopez got Kiski started upfield. The Cougars did not get off any dangerous shots right away, but they kept the ball in the Patriots' end, and eventually Phillip scored from the middle of the box on a ball that bounced down off the crossbar and off of GA's goalie, senior Joe Joe Cava.

This came right around the midpoint of the first half, and GA would answer about six minutes later. Senior Christian Combs threatened on an advance along the left endline. He was stopped by a defender, but Kiski could not clear the ball. GA's Venziale got to the loose ball in the left side of the box and kicked it laterally across to the right. Senior Sean Lipschutz was waiting on the weak side, and he fired a shot past a Kiski back to level the score for the Patriots.

The 1-1 tie would remain on the board for the rest of the first half and about 17 minutes into the second stanza. Kiski went ahead after a cross from the right endline. There was a rebound inside, and the ball was then stuffed in by junior Sebastian Porcella, from the Dominican Republic.

Germantown's situation grew more dire five minutes later, when the skillful Phillip scored on a shot from an extreme angle out along the left endline.

The two-goal advantage for the top seed lasted for over 10 minutes, then the Patriots reduced their deficit to a single point with under seven minutes left to play. The sequence started with Combs penetrating from the left, then sending the ball across the face of the goal for Lipschutz. He then directed the ball back inside, and from a little left of center, junior Tyler Weiss scored on a shot off the Kiski crossbar.

After this, the Cougars made a concerted effort to give themselves some breathing room once more. The clock was down close to two minutes remaining when they put the 4-2 final up in lights (the scoreboard had been dark throughout the first half, but now was at least showing the team score).

Enrique Lopez, twin brother of the Kiski goalie, made a nice centering pass from the right, setting up a tap-in by junior Francisco Sanchez from the Dominican Republic.

GA actually had some very late chances to get back within one goal. On a corner kick, the ball ended up going out over the endline off of the Patriots, then on an outside serve (or shot?) by GA the ball was grabbed by Lopez, the Kiski keeper.

Since there was no 2020 PAIS tourney, the Cougars had repeated as champions, having won their first Indy Schools title in 2019. After some disappointment in the moment, the GA Patriots would be able to reflect upon an inspirational season.