The spritely, energetic woman with the empathetic, crystal-blue eyes is a rock star of sorts in Warsaw, well-known for her kids’ cooking school Little Chef – and for the nonprofit Recipe for Independence, an organization that has helped feed some of the more than two million refugees who’ve crossed the border into Poland since war broke out Feb. 24 in the Ukraine. 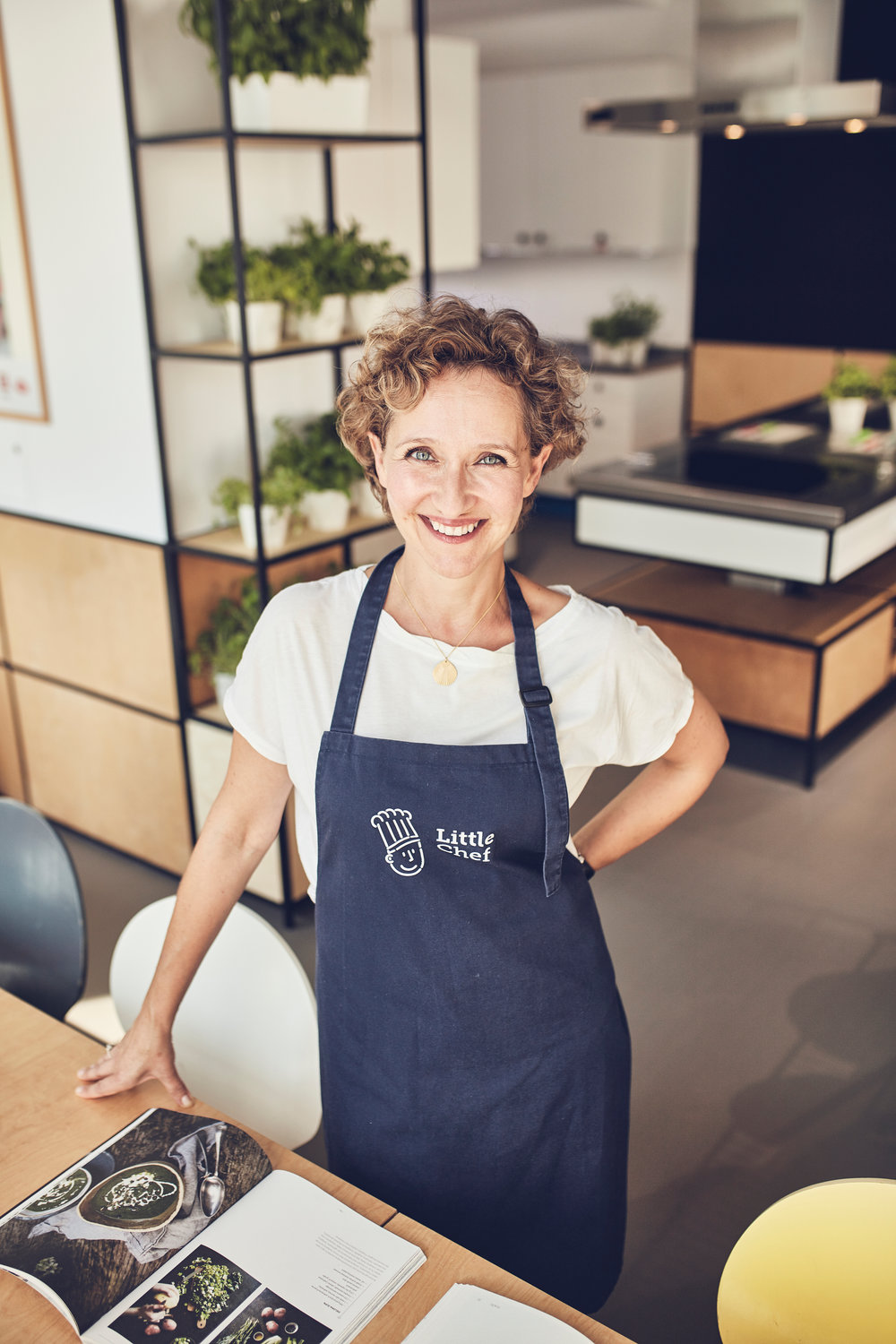 Every day, seven days a week, they come by bus and by train from the Ukraine into Poland, women and children with only the clothing on their backs, and sometimes a plastic bag full of belongings.

They are tired, worn down, afraid and most often, hungry from their days-long exodus from a war-torn nation.

And when they arrive in Warsaw, at an old concert venue-turned-refugee center called Torwar, one of the women working behind the scenes to make sure they receive the food and basic supplies they need is former Hiller Katia Roman-Trzaska.

The spritely, energetic woman with the empathetic, crystal-blue eyes is a rock star of sorts in Warsaw, well-known for her kids’ cooking school Little Chef – and for the nonprofit Recipe for Independence, an organization that has helped feed some of the more than two million refugees who’ve crossed the border into Poland since war broke out Feb. 24 in the Ukraine.

Every day for the past few weeks, hundreds of volunteers are there at the Torwar, serving up thousands of sandwiches and providing hot meals for the 500 refugees at a time who fill the beds in the center. The stadium atmosphere is a temporary staging ground of sorts for those who will be relocated to local homes or other places where they can try to rebuild their lives. Roman-Trzaska is working to coordinate food preparation, and she also sees that every mother gets a “Welcome Package” that includes everything from underwear and socks to foods, milk for the children, basic toiletries and hygiene items.

“There is this innate understanding that this is happening 150 miles from our border. They arrive with children. They are hungry. And many only have a plastic bag; that is all they have. You can wear the same clothes again, but you need to change socks and underwear,” Roman-Trzaska said, visibly choking up as she spoke via FaceTime. “The first wave was people who might know someone in Poland. The second and third waves of people have been people who know no one here, have no money. What we fear is that this will be a humanitarian crisis.”

The recent day I spoke with the mother of two in a video call from Poland, it was one of her rare days off. She has been working around the clock arranging to have meals cooked by local chefs delivered to the stadium.

“We are coordinating help so that all food is made in professional kitchens,” she said. “Warm meals and sandwiches. In order to start a long-term project like this, my last weeks have been all about fundraising and working with chefs to commit for at least six months of cooking for the center.”

Roman-Trzaska is proud of her Polish heritage. Her parents, Yolanta and Romuald Roman, are longtime Hillers who left Poland when Roman-Trzaska was 10 years old as refugees to come to America, where they were hosted by a Mormon missionary. They ended up living in Chestnut Hill on Stenton Ave., where they also ran a small bed and breakfast out of their home called Silverstone Bed and Breakfast. While Yolanta Roman devoted her career to nutrition and became president of the Kosciuszko Foundation Philadelphia Chapter, fostering relations between Poland and the U.S., Romuald Roman worked with the U.S. Environmental Protection Agency in Philly, and authored several books, including his first work of fiction due out soon with the local Chestnut Hill Press.

Roman-Trzaska left Chestnut Hill in the 1990s to attend the University of Warsaw Law School, and decided to stay in Poland to start her career. Though she did initially practice law for about six years, she said she felt burned out, and wanted to do a job that involved food and let her interact with people. So she began a kids’ cooking school in Warsaw called Little Chef, which since 2007, has helped 120,000 children learn basic cooking and life skills.

By 2018, she and a colleague from Little Chef started Recipe for Independence, a nonprofit that helps teenagers who are leaving foster care become more self-sufficient and independent. Teens 15 and older are paired with local chefs and gain self esteem and a sense of agency over their lives by learning how to cook - the idea being that if you know how to make a simple meal, you feel more in control of your life.

This endeavor, as well as 16 years of cooking with small children, has made Roman-Trzaska well- recognized in Warsaw. Now, she’s using that recognition to help raise money for the refugees and to fund relief efforts provided to them when they arrive. The operation has been honed to include professionally cooked meals over the past few weeks as refugees continue to pour in.

“Now we have a war on our border,” she said, overcome with emotion during the FaceTime call. “Every single person here knows someone who is Ukrainian. They are our neighbors, our friends, our coworkers.

“People are cooking, doing shopping, volunteering,” she said. “Almost everyone is doing something.

“Over the past two weeks, imagine it has been as if you had 50,000 people suddenly come to Chestnut Hill overnight. Our cities are transformed and will not be the same again.

“I was walking with two Ukrainian ladies today and I realized that we have all started to talk about things in terms of, that was ‘before the war,’ or ‘that was in peacetime,’” she said. “There will still be an influx of refugees now. We need people to come together. Even if you are far away, the more people know that there is something they can do, the better.”

If you would like to donate to Katia Roman-Trzaska’s Recipe for Independence Foundation, go to http://www.facebook.com/samodzielnoscodkuchni.