The Flaming Lips by Pete Mazzaccaro There’s really no band like The Flaming Lips. A noisy, artsy punk rock group when it was formed in Oklahoma 1983, it scored a hit in 1993 with “She Don’t Use … 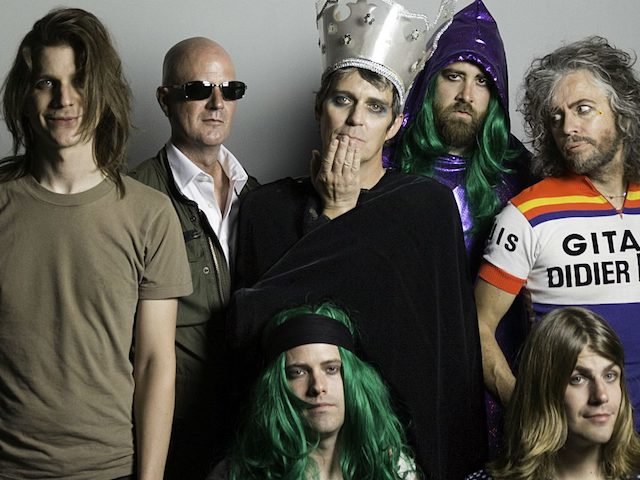 There’s really no band like The Flaming Lips. A noisy, artsy punk rock group when it was formed in Oklahoma 1983, it scored a hit in 1993 with “She Don’t Use Jelly,” a track that was just Nirvana enough to earn it regular radio rotation.

Hundreds of bands with a similar sound scored hits and quickly disappeared. The Flaming Lips followed that radio hit with an experimental 4-CD album called “Zaireeka,” in which each CD was meant to be played simultaneously in four separate CD players. It was a comically absurd act of experimentation, but admirable for its sheer audacity.

That might have been the end, but the band hadn’t worn out its welcome with the Warner Bros. label yet.

In 1999, they surprised everyone with one of the decade’s great rock records: “The Soft Bulletin.” Gone was the grunge sound and most of the electric guitars. In its place was a new, space rock sound of whirling keyboards, strings and big drumbeats. It was both operatic in scope and ambition and yet with an irresistible pop sensibility, anchored by band leader Wayne Coyne’s tuneful, melodic sensibilities. It was comparable to the Beach Boys’ “Pet Sounds,” another hallmark record of pop experimentation.

The band followed it up with the equally excellent “Yoshimi Battles the Pink Robots” in 2002, which earned it a Grammy and several radio singles, including “Do You Realize??,” which was the official rock song of the state of Oklahoma from 2009 to 2013.

After nearly 15 years of experimentation and several notable but underwhelming LPs, including a song-for-song cover of Pink Floyd’s “Dark Side of the Moon,” the band is almost back in the form it found on “Soft Bulletin,” with its latest, “King’s Mouth.” It’s The Flaming Lips’ 15th studio album.

“King’s Mouth” is delightfully listenable for many of the same reasons “Soft Bulletin” is. The songs are tightly contained, well arranged and expertly performed. And yet, in true Flaming Lips style, the record’s subject matter is absurd. In this case, it’s the bizarre narrative of a baby king with a giant head whose mother dies in childbirth. Later, the king saves his subjects from an avalanche by swallowing the universe and sacrificing himself in the act. His subjects somehow remove his head, hold a parade for it and literally move in for eternity.

The narrative, conceived by Coyne as an art exhibit (he’s also a painter) is delivered in part through the song’s lyrics, but also through a series of narrations by the Clash’s Mick Jones, giving the record a wild children’s storybook feel. Imagine a rock opera written by Pink Floyd and Roald Dahl and you’ll have an idea of what to expect from “King’s Mouth.”

Despite the fantastic subject matter, “King’s Mouth,” is not an inaccessible record. It has a few flights of instrumental fancy, but it is largely grounded in wonderful pop songcraft. Even if the experimental isn’t your thing, it’s well worth a listen or two. You might find you like it.

Key songs: “Sparrow,” “Feedaloodum Beedle Dot,” “How Can a Head.”