From left to right, violist Beth Dzwil, violinist Rachel Segal, cellist Mary Morris-Kim and violinist Leah Kim make up the Fairmount String Quartet, which performed at the Presbyterian Church of … 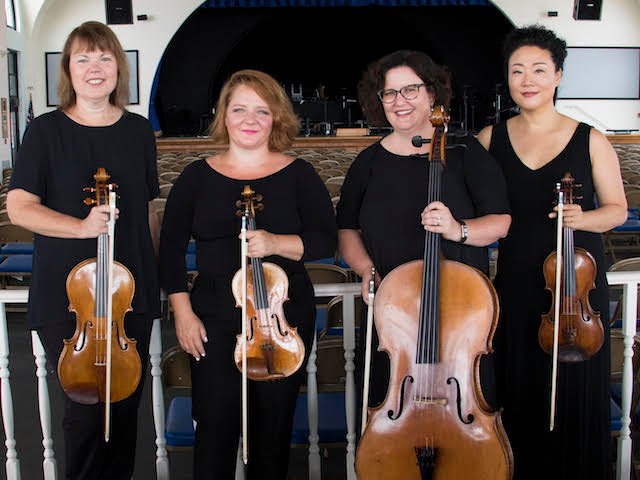 A tiny but appreciative audience gathered in the Chapel of the Presbyterian Church of Chestnut Hill Friday evening, April 26, to hear the Fairmount String Quartet play works by Ralph Vaughan Williams, Jennifer Higdon and Claude Debussy. The ensemble, comprised of violinists Rachel Segal and Leah Kim, violist Beth Dzwil and cellist Mimi Morris-Kim, are artists-in-residence at the church.

They opened their program with a lovely rendition of Vaughan Williams’ “Rhosymedre: Prelude on a Welsh Theme.” The short one-movement work is one of those scores the composer wrote as a result of his having scoured the English and Welsh countryside to rescue from certain oblivion the thousands of folk tunes squirreled away in Anglican parish churches, village libraries and town halls. These songs often reached back into the late Middle Ages and were voiced in the modal melodies and harmonies that had fallen out of fashion.

Like Frederic Delius in his own England, Ottorino Respighi in Italy, Claude Debussy and Maurice Ravel in France, Bela Bartok and Zoltan Kodaly in Hungary, and Manuel de Falla, Isaac Albeniz and Enrique Granados in Spain, Vaughan Williams was searching for an alternative to Arnold Schoenberg’s 12-tone method for composing classical music.

The Fairmount musicians caught the poignant melancholy, lush harmonies and lilting melodies of the score. Of particularly touching effect were those measures when the viola took the lead with the other three players producing a halo of supportive counterpoint surrounding it. Dzwil’s tone was warmly winning.

Higdon’s “Sky Quartet” is an attractive piece of tone painting. Its four descriptive movements — “Sky Rising,” “Blue Sky,” “Fury” and “Immense Sky” — nonetheless coincide with the traditional four-movement structure of the classical string quartet as it was invented in the 18th century by Franz Joseph Haydn. And then, of course, taken up by nearly every subsequent major composer right into the 20th century with masters such as Bela Bartok and Dmitri Shostakovich. 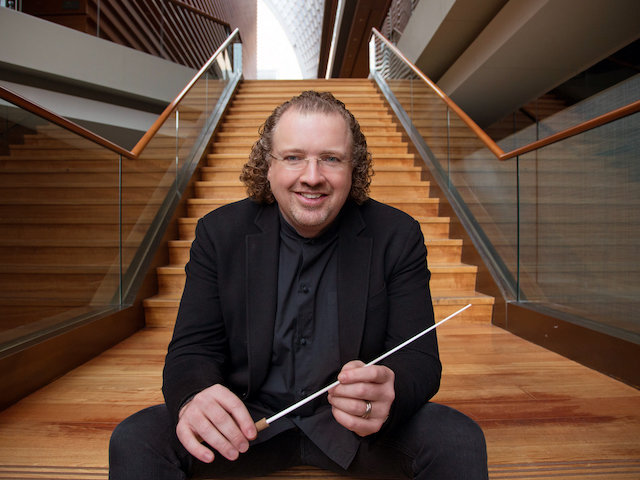 After five years as the Philadelphia Orchestra's principal guest conductor, French-born maestro Stephane Deneve will be leaving his position next season. (Photo courtesy of Alexa Vecchione)

French-born maestro Stephane Deneve completed his five-year tenure as the Philadelphia Orchestra’s principal guest conductor by leading a series of concerts May 2-4 in the Kimmel Center’s Verizon Hall. Beginning next season, he becomes the music director of the St. Louis Symphony.

His weekend program featured two works: Sir Edward Elgar’s Violin Concerto in B minor, Opus 61, with Nikolaij Szeps-Znaider as soloist, and Peter Ilyich Tchaikovsky’s Symphony No. 5 in E minor, Opus 64. With the immeasurable help of his soloist, Deneve offered those podium talents that have made him a favorite of local audiences: an energetic conducting style that visually delineates the mood and character of the music being performed founded on a supreme knowledge of the music and an ability to elicit exemplary playing from those “Fabulous Philadelphians.”

Tchaikovsky’s Fifth Symphony was the perfect choice for the culmination of Deneve’s tenure with the Orchestra. It’s been a steady staple of the ensemble’s repertoire since 1906 when Fritz Scheel led it for the first time, and it was most recently performed in May of 2017 when Chestnut Hill’s Cristian Macelaru conducted it as part of his final season as the Orchestra’s conductor-in-residence. The Philadelphians have recorded it eight times: with music directors Leopold Stokowski, Eugene Ormandy, Riccardo Muti and Christoph Eschenbach. In other words, the players know the notes.

To his inestimable credit, Deneve put his own distinctive stamp on Saturday evening’s interpretation. He caught the brooding mood of the first movement, the melancholy lyricism of the second, the lilting waltz of the third and the flawless delineation of classical denouement of the fourth.

Throughout the entire score, he encouraged spectacular playing from all four sections of the ensemble. The strings glistened in the old Ormandy tradition, the woodwinds sang like a Muti-led operatic choir, the brass glowed with a nod to Wolfgang Sawallisch’s tenure as music director, the percussion battery sizzled, and it all came together with the clarity of texture reminiscent of the Stokowski years. No wonder the performance received an overwhelming ovation at its conclusion.

Although Elgar’s Violin Concerto tends to go on a little too long – especially its closing movement – it would be hard quibbling with the notion that you can never hear enough of Nikolaij Szeps-Znaider’s playing. This was all the more so during these concerts, since he performed on the 1741 “Kreisler” Guarneri del Gesu that was used by Fritz Kreisler himself when he premiered the work in 1910.

All great violins are truly living beings, and this one obviously adores its current collaborator. Together they sang the music with soaring lyricism and burning brilliance.

Pennsylvania Ballet will end its 2018-19 season with a three-part program May 9-12 in the Academy of Music. The show will feature the company premiere of Jerome Robbins’ “Glass Pieces,” Christopher Wheeldon’s “DGV: Danse a Grand Vitesse,” and the world premiere of Jorma Elo’s “Trigger Touch Fade.”

Among the principals dancing one or more of these new works are Lillian Di Piazza, Jermel Johnson and Sterling Baca. During breaks in their rehearsals last week, I had the chance to chat with them about not only this season finale but also their plans for the summer.

“It’s a long summer off,” explained Baca, “so I like to keep busy. First thing for me will be ‘Organ Day’ at the Kimmel Center. This will be my second year taking part. My sponsor here at Pennsylvania Ballet is Fred Haas and the Wyncote Foundation. Fred is deeply involved in organ projects throughout the country.”

The fabulous pipe organ at the Kimmel Center’s Verizon Hall is named in memory of one of Haas’ grandfathers, Fred J. Cooper. The event takes place Saturday, June 15. Baca will be joined dancing on the Verizon Hall’s stage by fellow dancers Oksana Maslova of Roxborough, Nayara Lopes and Albert Gordon between 3 and 3:45 p.m.

Baca and Di Piazza will be involved in an International Dance Festival in Panama City, Panama, July 24-28. Dancers from other major companies throughout the world such as the United Kingdom’s Royal Ballet, Covent Garden and New York City’s American Ballet Theater will also take part. Baca will round out the summer coaching younger dancers for the company’s Summer Intensive Aug. 21-26.

Jermel Johnson and Maslova will be dancing together in “Glass Pieces” – the slower pas de deux he pointed out. He also raved about the chance to work with Jorma Elo on “Trigger Touch Fade.” “It’s been so much fun working with him,” he said.

Johnson, who is married to David Jackson, lives in Lancaster with their two young children. “It’s nearly a two-hour commute for me,” he explained, “so I’m taking some down time off this summer to spend with the family.”

Di Piazza will be dancing in all three of the works in the program. She explained that Elo’s choreography is more classical than that of the others, but that each has its own approach to dancing and all are filled with distinctive movements.

She and Baca will dance a selection from “Giselle” in Panama and hopefully a movement from a work by company choreographer Matthew Neenan. She will also be teaching in both Swarthmore and Princeton. “And traveling for fun to Japan and going to France for a friend’s wedding. And then resting my body for the fall.”

For ticket information for the May program in the Academy of Music, visit paballet.org