“The Lure of the Wissahickon Inn” details the inn’s transformation from a popular 19th century summer resort for urban-weary Philadelphians to its current role as the home of Springside Chestnut Hill Academy’s (SCH) Upper School. 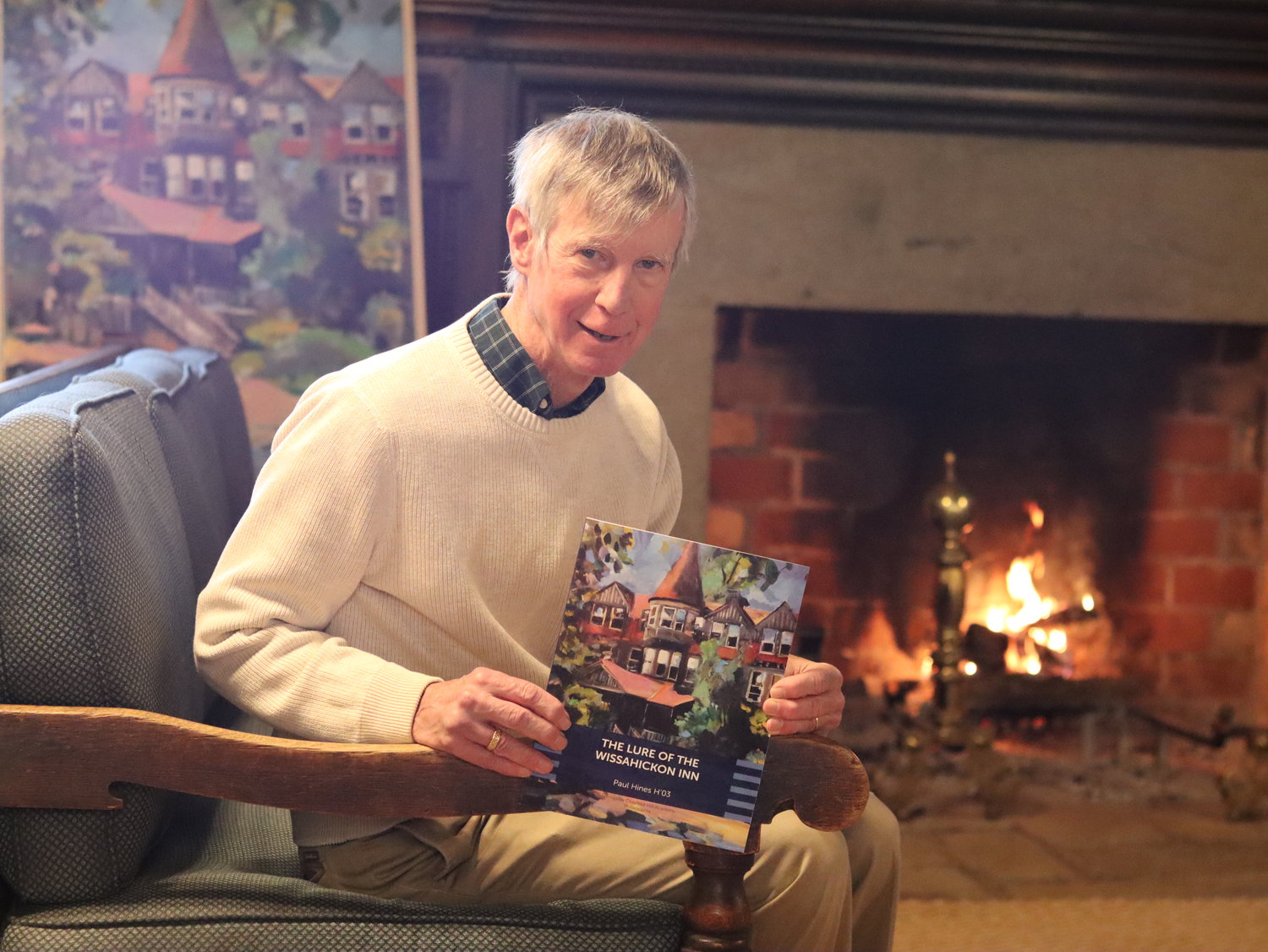 Paul Hines, a former Middle School history teacher at Springside Chestnut Hill Academy, holds up a copy of his new book, “The Lure of the Wissahickon Inn.” 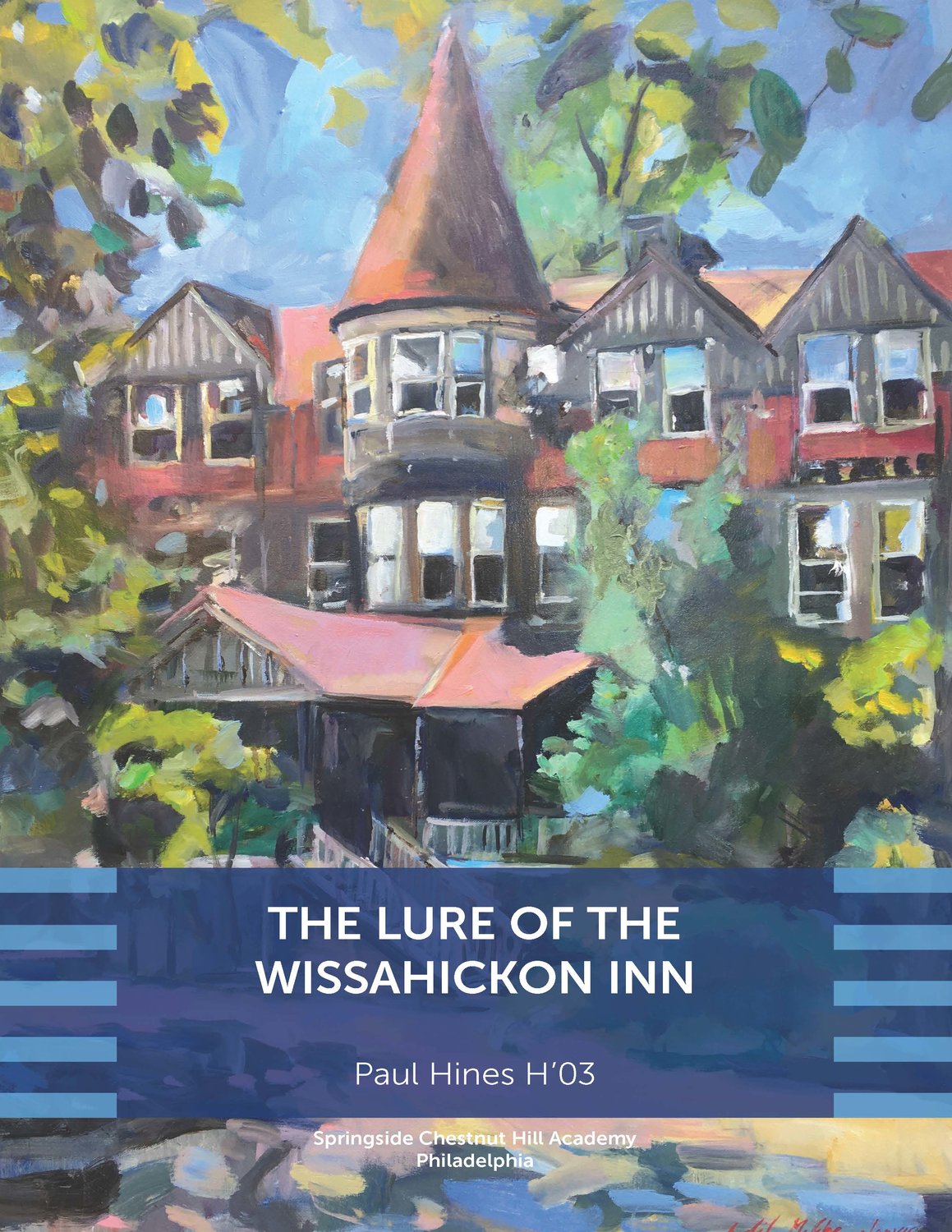 The cover of “The Lure of the Wissahickon Inn” shows a beautiful painting of the iconic building by local artist and Springside alumna Judith McCabe Jarvis.
Previous Next
Posted Friday, May 7, 2021 11:00 am
by Deidra A. Lyngard

Springside Chestnut Hill Academy recently published a 120-page history of the school’s iconic building, the Wissahickon Inn. “The Lure of the Wissahickon Inn” details the inn’s transformation from a popular 19th century summer resort for urban-weary Philadelphians to its current role as the home of Springside Chestnut Hill Academy’s (SCH) Upper School.

The book’s author, Paul Hines, explained in a recent interview what was involved in assembling and writing his history, which is an entertaining mix of historical fact and personal stories culled from generations of students, alumni, faculty and administrators who have called the inn home.

Hines, a former Middle School history teacher at SCH, and before that CHA, has long been a fan of local history. When he came to teach at CHA in the 1980s, he started studying about this area, even taking a course on Chestnut Hill history from Chestnut Hill College professor David Contosta. For many years, as part of Hines’ 5tth grade American History course, he would take his students on excursions around Chestnut Hill and through the Wissahickon to teach them about the area.

He also gave them behind-the-scenes tours of the inn, with stops at the site of the inn’s old swimming pool, still hidden beneath the floorboards of the school cafeteria, and the beautiful Epiphany Chapel, today a school assembly space, but at other times the inn’s ballroom, a school gym and a parking garage for the headmaster’s Oldsmobile in the late 1800s.

Over the years, Hines has expanded his knowledge of the inn with facts pulled from school yearbooks, newsletters and other publications. In the 1980s, he undertook an extensive oral interview with CHA alumnus Charles Landreth, Class of 1929. This interview yielded a rich trove of stories as well as the suggestion that Hines reach out to any still-living alumni who were once boarders at the school. From this outreach, Hines collected some of the book’s more interesting and amusing anecdotes that provide a wonderful glimpse into teen hijinks of the period.

For example, boarders shared their stories about stashing forbidden radios under the floorboards, finding a sleeping raccoon in their bed, sneaking off to dances and parties and even hanging a roasted chicken outside the window to keep it cool for a late-night snack. The most ambitious boarder tale involved two enterprising students who took a train to New York City, where they spent the evening on Broadway and returned the next morning in time to eat breakfast and take exams.

Some stories came easy, others not. Like most historians, Hines ran into conflicting facts and missing information. One concerned the size of Henry Houston’s original land purchase for his Chestnut Hill development; another concerned the fate of the Philadelphia Horse Show that was hosted on the inn’s grounds for many years. Some histories put the amount of land purchased by Houston at 5,000 acres; others at 2,000 or 3,000. The original holding extended from West Allens Lane in Mt. Airy to Ridge Pike and Butler Avenue. Hines mentioned that at one time the Andorra section was identified as a possible location for United Nations housing when that organization was considering the Belmont Plateau for its official site.

The Philadelphia Horse Show, which drew up to 10,000 visitors a year to the inn’s grounds, presented another factual challenge. The apocryphal story that has long been handed down at school is that the Philadelphia Horse Show moved to the Main Line and became the Devon Horse Show. However, further digging by Hines revealed that the two events existed simultaneously and operated separately. He has found no record that indicates they ever merged. He now believes the horse show in Chestnut Hill may simply have closed down in 1908, leaving the field open for Devon to prosper and grow into what it is today.

Hines encountered some surprises when completing his research. For example, he learned that the inn once had a blacksmith shop to service the many equine, vehicle and other hardware needs of the inn and its guests. He also learned that the inn had a bridal suite on the southeast corner of the second floor, which included two bedrooms, a sitting room and a bathroom.

The Wissahickon Inn has played an important role in the history of Chestnut Hill, and Hines' book makes a significant contribution to our appreciation of this local architectural gem. The inn was the first building Henry Houston built and was the centerpiece of his vision for his planned community. And since 1898, it has served as the heart of the area’s second largest educational institution after Chestnut Hill College.

To purchase a copy of “The Lure of the Wissahickon,” call 215-261-6881 or email Kristin.norton@sch.org. Deidra A. Lyngard is Director of Publications and Video at SCH.