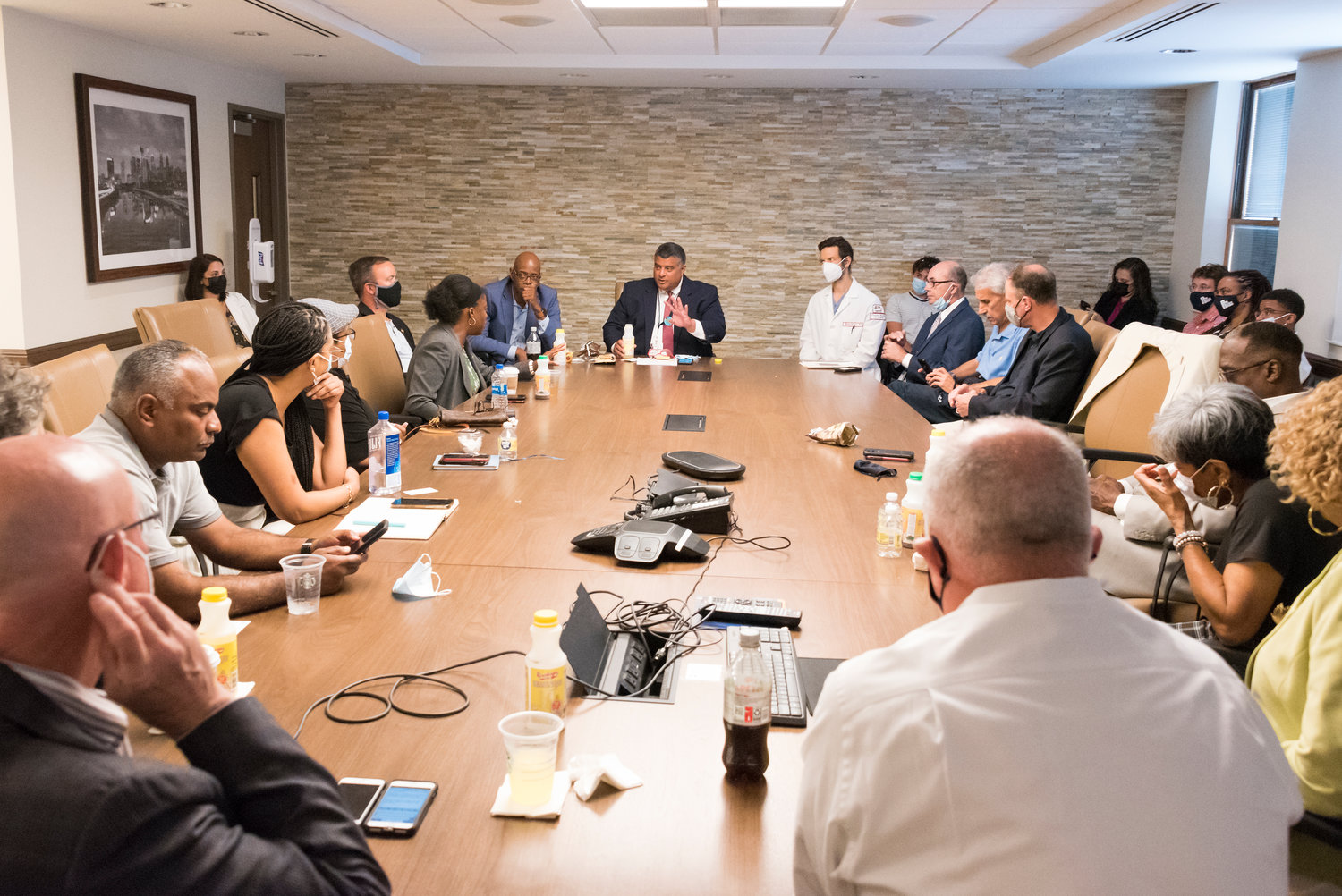 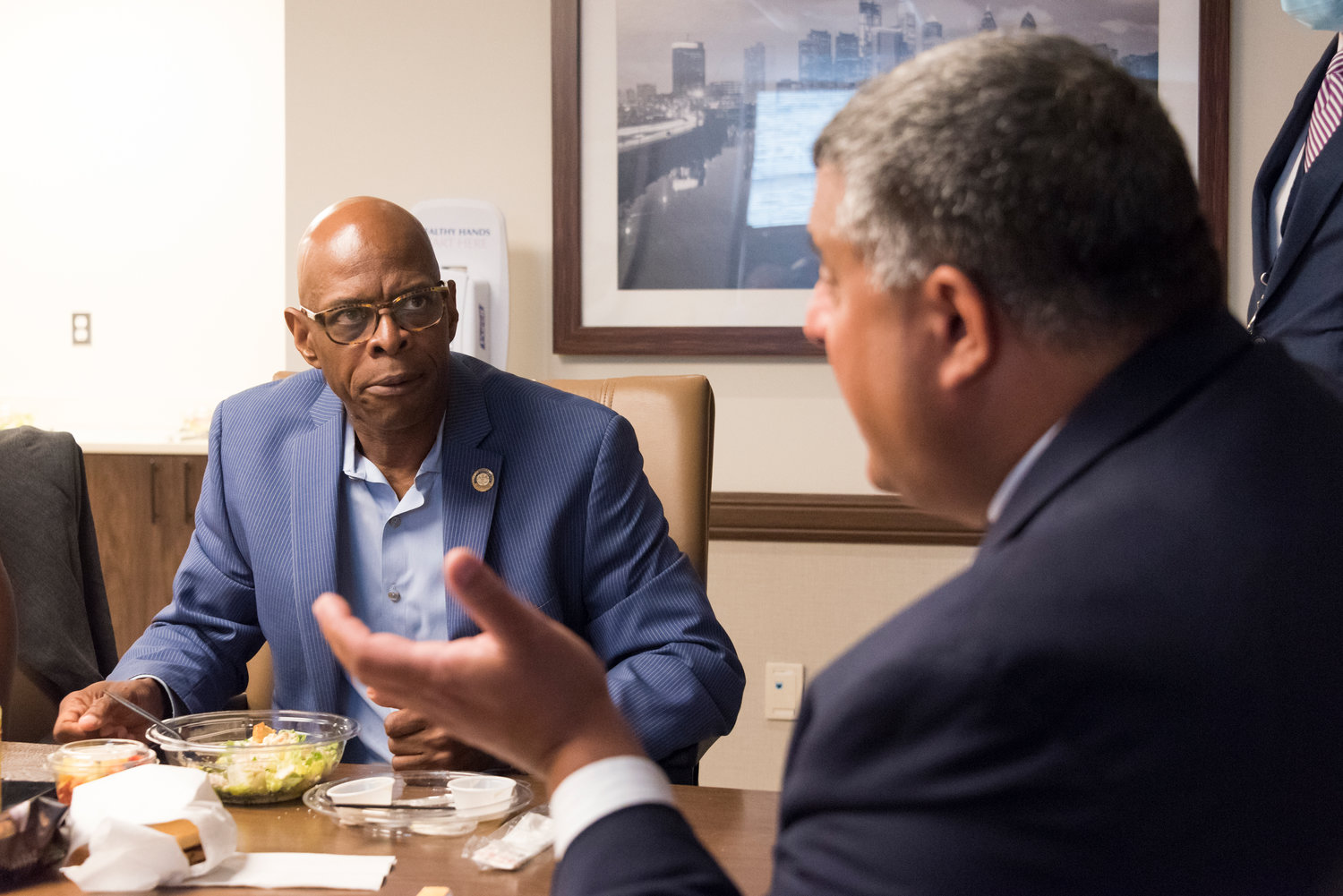 The meeting, hosted by the state House Democratic Caucus Policy Committee at the request of State Rep. Stephen Kinsey, included 22 Democratic lawmakers from across Pennsylvania.

According to Kinsey, the meeting included lawmakers from as far away as Pittsburgh and Erie, and was “one of the largest sit downs we’ve had in the Democratic Caucus in quite some time.”

“They all know - they have similar situations in their own communities, with small hospitals that are facing challenges,” Kinsey said.

“They wanted to have a conversation about the real fundamentals regarding various policy concerns in healthcare and figured this would be a good place to do it since they know Chestnut Hill has been challenged economically due in part to COVID,” said John Cacciamani, president and chief executive officer of Chestnut Hill Hospital.

And according to Kinsey, that’s what they got.

“Normally, at meetings like this we’ll have someone testify and give a prepared statement. This one turned out to be a roundtable discussion that was so fruitful that lawmakers opted to scrap a tour that had been scheduled,” he said. “That’s how good the conversation was, and how important the information that was shared.”

The impact of COVID

Kinsey, who has been working closely with Chestnut Hill Hospital since launching the Northwest Philadelphia Covid Coalition at the start of the COVID pandemic, said he wanted other lawmakers to hear directly from Cacciamani about how community hospitals like his are faring in the wake of COVID.

“I thought it was important that we bring together other state policy makers to have a real conversation about how small hospitals like this one seem to be struggling, particularly as a result of COVID, and most importantly, what we can do as legislators,” he said. “I am really concerned about what will happen to Chestnut Hill Hospital - because they do serve people throughout the Northwest, not just Chestnut Hill.”

Cacciamani started by stressing how important widespread vaccination has turned out to be.

“Vaccination has really transformed the epidemiology of this disease,” he said. “When our patients who haven’t been vaccinated come in, their risk of mortality is many times higher. We really need our public health agencies to make sure that we continue to push for vaccination.”

Beyond that, Cacciamani said, they discussed what went wrong early on in the pandemic, and what state and federal governments could and should have done better.

“I was pretty clear about my frustration with not being able to get the resources that we needed,” he said, referencing masks, gloves and hospital gowns as well as medical equipment, including respirators.

“These things are fundamental - I shared what it was like to be on the phone with a translator, talking to foreign brokers, about masks and how we could get them,” he said. “This was a position I never could have imagined being in considering our usual access to resources. I encouraged them to think about how they could either stockpile this equipment or come up with a way to be able to manufacture it as we need it.”

They also discussed the downstream impact that COVID has had on all hospitals, particularly when it comes to labor shortages, Cacciamani said.

“We had a significant number of people leave the workforce during COVID, particularly when it comes to nursing - as the work became ever more emotionally and physically draining, as well as potentially life-threatening,” he said. “We talked about the need to encourage and incentivize young people to take nursing and other healthcare vocations on as a career.”

And then there’s the impact of the larger economy. Hospitals, like every other facet of the economy, are dealing with the impact of inflation - and small hospitals like Chestnut Hill have a harder time dealing with it than larger ones, Cacciamani said.

“The majority of our funding is fixed, as it comes in the form of Medicare or Medicaid, or contracts with other insurance companies,” he said. “So as we see inflation bring an increase in the cost of all our supplies and labor, that’s going to have an impact.”

Smaller hospitals don’t have the same leverage when negotiating prices, he said, “and we also don’t have as powerful a balance sheet.”

Finally, Cacciamani said, they discussed the need for greater transparency - and fairness - in the way the health insurers reimburse hospitals for the care they provide.

“The way it is now, the small guy doesn’t get paid anywhere near as much as the big guy,” he said. This disparity is due to the fact that big insurers are more reliant on large hospital systems than they are on small community hospitals,” Cacciamani said.

But if state legislators want to see community hospitals like Chestnut Hill’s stay afloat, he said, they should ensure that the state’s insurance commissioner takes note. “It’s a market-based problem.”