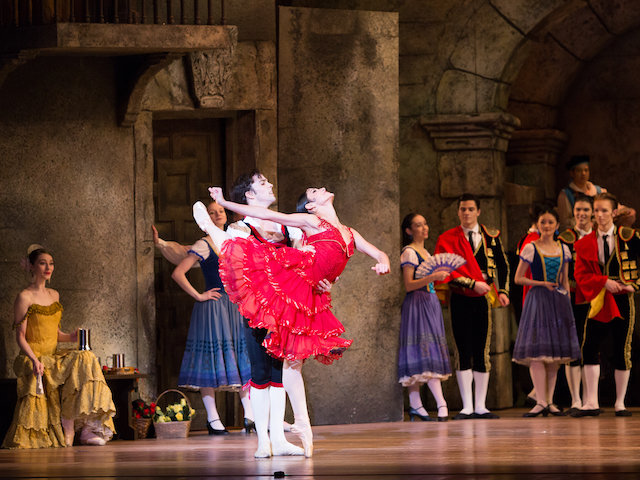 Pennsylvania Ballet soloist Mayara Pineiro as Kitri, and Corps de Ballet member Etienne Diaz as Basilio in "Don Quixote." (Photo by Alexander Iziliaev)
by Michael Caruso The Episcopal Church of St. Martin-in-the-Fields, Chestnut Hill, hosted its first Choral Evensong of the season Sunday, Oct. 6. Music director Erik Meyer, who only recently announced his decision to step down from his post as of Jan. 5, 2020, conducted the parish choir in music by James Buonemani, Bruce Neswick, Roland Martin and Charles Villiers Stanford. At the church’s lovely pipe organ, Meyer played Louis Vierne’s “Adagio” from his Symphony III at the start of the service and Johann Sebastian Bach’s Prelude in C major at its conclusion. The two principal works of the Evensong were the traditional settings of the “Magnificat” and “Nunc Dimittis” composed by Roland Martin. With texts taken from the New Testament Gospel of St. Luke, both scores accompany the choir with efficacious and appropriate organ writing. The choral writing in the “Magnificat” (“My soul doth magnify the Lord”) is broad and contrapuntal, requiring the male voices to provide as much of the texture as do the female voices. In the “Nunc Dimittis” (“Lord, now lettest thou thy servant depart in peace”), Martin opted for darker harmonic hues and a more gentle tone. In both works, Meyer and his choristers admirably caught the mood of each through singing of exemplary blend and balance, dramatically cast dynamics and expressively shaped phrases. The service’s other major choral piece was Stanford’s anthem at the Offertory, “”Blessed are the undefiled in the way.” It’s a delicately voiced work; Meyer and his choristers projected the autumnal character of its early evening timbres. Meyer caught the over-ripe romanticism of the Vierne with consummate artistry and the festive high spirits of the Bach with technical aplomb and interpretive panache. TEMPESTA ON THE HILL Tempesta di Mare, Philadelphia’s leading baroque orchestra, will present a concert of “Concerti and Suites by Handel & Telemann Friday,” Oct. 18, at 8 p.m. in the Presbyterian Church of Chestnut Hill. The program includes Handel’s Concerto in G minor and Concerto grosso, Opus 3, no. 1, as well as Telemann’s Concerto for Multiple Instruments and “Entr’actes.” For more information, visit TempestadiMare.org or call 215-755-8776. “DON QUIXOTE” Pennsylvania Ballet is opening its 2019-20 season with performances of “Don Quixote” in the Academy of Music. I caught the Saturday evening, Oct. 12, performance; the run continues through Sunday, Oct. 20. The company’s mounting features choreography by its artistic director, Angel Corella, based on the original of Marius Petipa and Lev Ivanov. The dancing uses as its musical foundation a score by Ludwig Minkus, which is so baleful that to call it “wall paper music” would be an insult to wall paper. Fortunately for all concerned, the foundation point of the ballet “Don Quixote” is Manuel de Cervantes’ immortal novel of the same name. In this version, Cervantes and his sidekick Sancho Panza are merely the instigators of the plot, taking on a minor part in its presentation, development and resolution. The real stars of the show are the villagers Kitri and Basilio, danced Saturday evening by audience favorite Lillian DiPiazza and Zecheng Liang, newly promoted to the rank of principal dancer. The only problem with this approach is the slow start in act one that doesn’t really begin to pick up momentum until the end of act two and then reaches its full throttle only in act three. DiPiazza danced with exemplary technical polish and interpretive insight. Her point work was superb, displaying an unerring sense of poise and balance. She never failed to extend the legato line of every gesture to its fullest yet unforced extent, while never allowing each individual moment to interrupt the flow of the narrative line of her character. Liang’s dancing showed an equally high standard of technique. His leaps and turns were flawlessly on the beat of the music, and he landed from the fastest turns and highest leaps with the padded silence of a prowling leopard. I’m sure that in future performances his dancing will more deeply project the character of the role he’s portraying. Dayesi Torriente and Jack Thomas were dazzling as villagers Mercedes and Espada, Aleksey Babayev made a stupendous gypsy, Jermel Johnson was a delightfully foppish Gamache, and Nayara Lopes and Alexandra Heier were splendid as the Queen of the Dryads and Amor. Beatrice Jona Affron conducted the Pennsylvania Ballet Orchestra with an expert hand in spite of the pseudo-Spanish sonic drivel she and her musicians were forced to lead and play. For ticket information, visit PABallet.org or call 215-551-7000. PIPE ORGAN RESTORED After a restoration project that took two years to accomplish, one of Philadelphia’s most historically significant pipe organs is finally making beautiful music again. The 1937 Aeolian-Skinner pipe organ at St. Mark’s Episcopal Church, 1625 Locust Street in Philadelphia, will officially be welcomed back into service Sunday, Oct. 20, at 4 p.m. in a recital played by Scott Dettra. Organ lovers in Chestnut Hill will recognize the name of Aeolian-Skinner as one of the most acclaimed organ builders in the United States, in general, and the principal builder, in particular, of the pipe organ at St. Paul’s Episcopal Church in Chestnut Hill. Both instruments play integral parts in their parish’s musical programs, which are among the finest in the region.
You can contact NOTEWORTHY at Michael-Caruso@comcast.net. Click here to read more of NOTEWORTHY online.