A dining room decorated for the Chestnut Hill Community Association’s annual Holiday House Tour. The fundraising event is one of the neighborhood’s biggest attractions of the year. (Photo by … 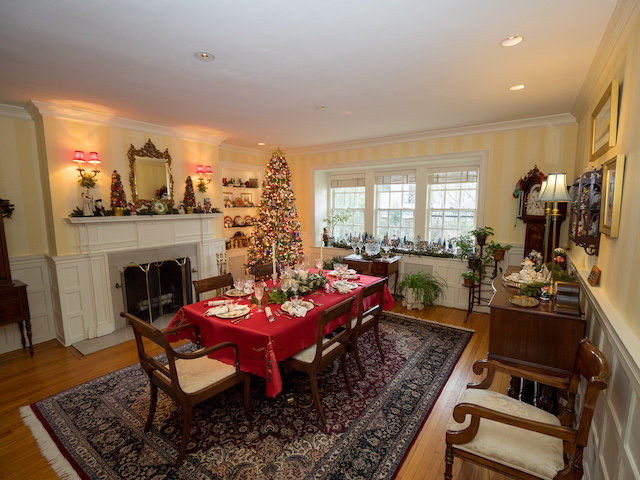 A dining room decorated for the Chestnut Hill Community Association’s annual Holiday House Tour. The fundraising event is one of the neighborhood’s biggest attractions of the year. (Photo by Steve Feistel)[/caption]

Susan Rohrer of Glenside, Ronnalee Colantonio of Doylestown, Cheryl Kurpipl of Warrington and Nancy Manno of Blue Bell were eating cookies and scones and chatting about the Chestnut Hill Community Association’s 26th annual Holiday House Tour. The four friends, who recently retired, met when their children were small and plan a get-together every holiday season.

They chose to take in the house tour together, and they were certainly happy customers.

Rohrer said the tour’s planners, the CHCA, “thought of everything.” She said everything was so well-planned out.

“We barely waited for the next trolley, and everyone was so friendly – on the trolley, in the houses.”

Manno added that everyone was very accommodating.

“If you had a question and they didn’t know, they found out,” she said.

Colantonio said she thought the tour was “lovely.” Everyone agreed it was “very festive.”

Rohrer said she enjoyed the volunteer’s hot cider. She didn’t mention whether she had the one spiked with a touch of rum or just plain hot apple cider.

“The only tough part was putting the booties on and off,” she said.

Although, they all agreed “it was interesting watching everybody helping each other,” and added that most houses had a few places people could sit and put the blue covers over their shoes to protect the homeowners’ carpets and floors.

One of their favorite houses was designed in the Queen Anne style by Lindley Johnson in 1884 for General Russell Thayer. Thayer graduated from the United States Military Academy in 1874 and worked as Chief Engineer of the Pennsylvania Railroad. 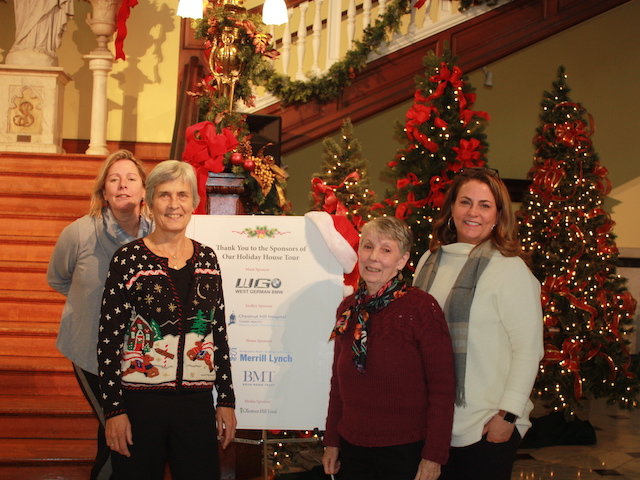 In the corner of the yard is an original archway and wrought-iron gate, which legend has it that Thayer used as his private railroad stop for the nearby train station.

Although they loved the unique millwork, molding and other architectural details, to them, it was the “house whose kitchen was decorated with gingerbread houses by the kids.” They loved that the owner and her kids decorated the entire house because it didn’t look staged. In fact, all the houses were decorated by the owners, except for the one for sale.

Another one of their favorite houses of the six festively decorated, architecturally diverse homes was built for John S. Jenks Jr. It’s one the signature estates in Chestnut Hill. It was built in the popular Pennsylvania Farmhouse Colonial Revival style. While the house was elegantly decorated, it was the combination of music and architectural beauty that made the house memorable said Kurpipl.

“Someone was playing a harp in the house and kids from Norwood Academy were singing carols outside,” she said.

Everyone’s favorite house was designed by in 1911 for Joseph C. Fraley by the firm of Duhring, Okie and Ziegler, who are best known as architects for George Woodward Co. It was built in the firm’s classic Colonial Revival styled homes inspired by 18th century Pennsylvania farmhouses.

Manno said the house had seven Christmas trees and a train set-up.

“It took three people one week to decorate the house,” she said.

She said the experience was almost magical – old friends making new memories during the holidays.

It may have been their first Holiday House Tour, but it wasn’t going to be their last, they said.