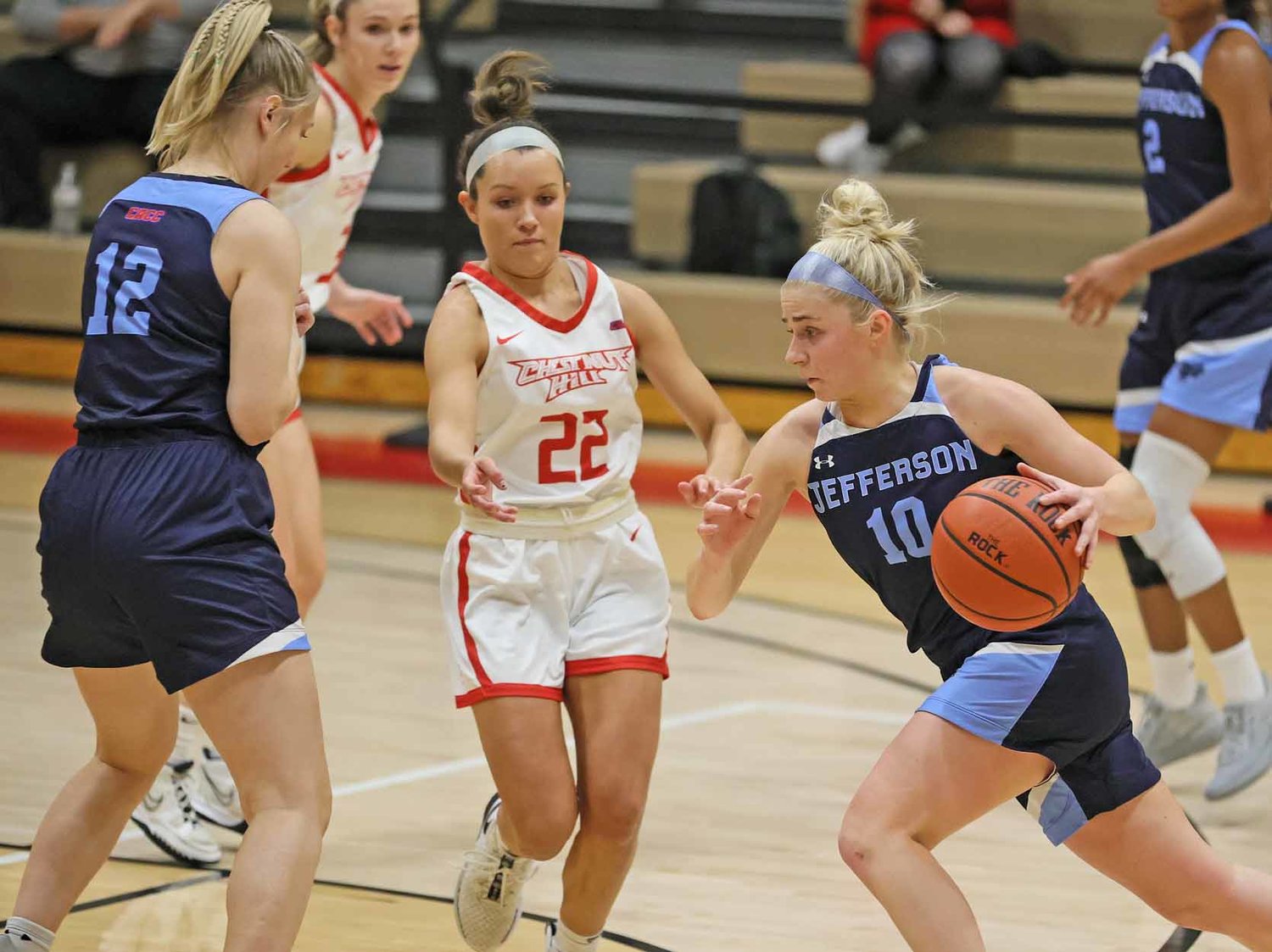 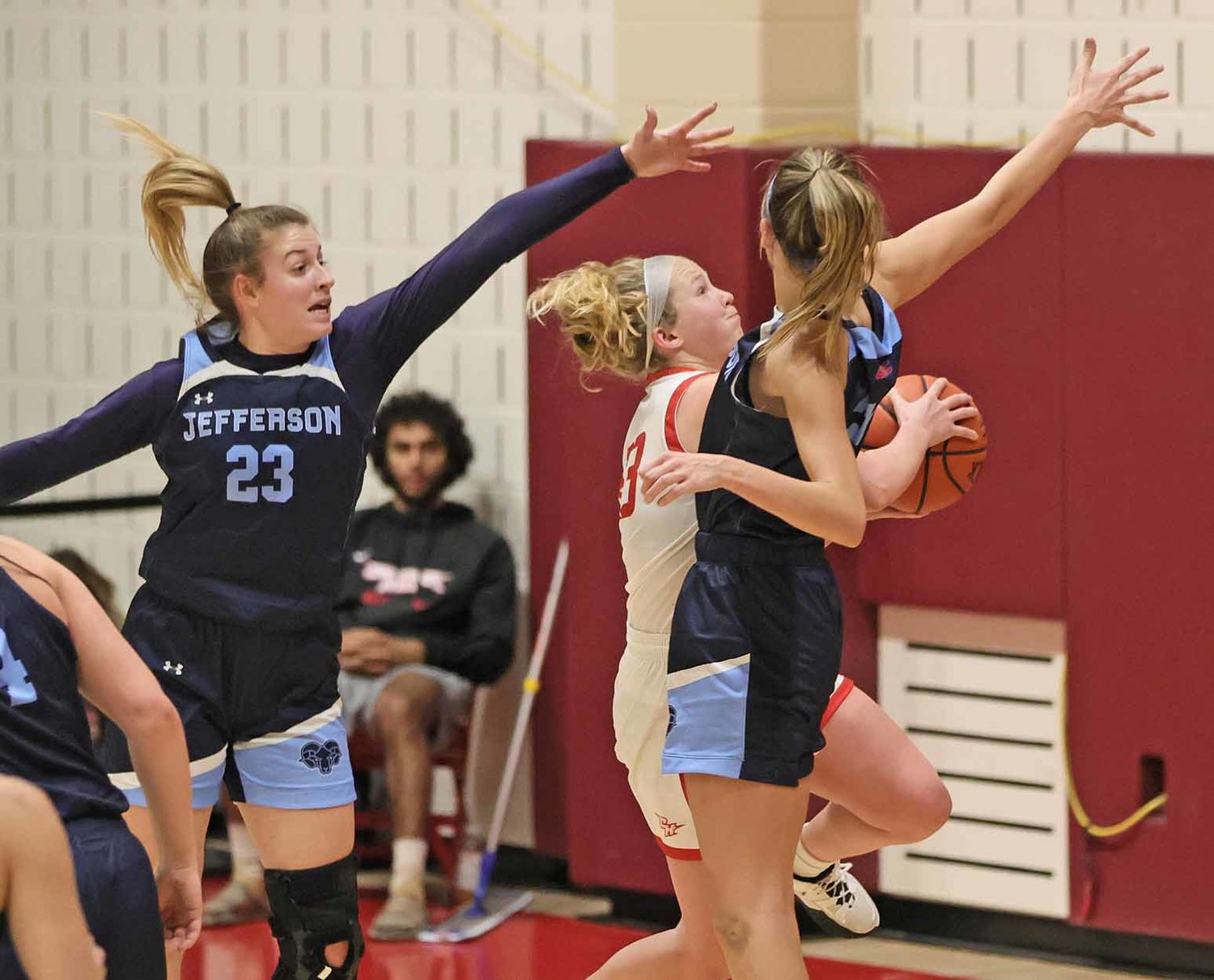 Last Thursday, Chestnut Hill College's undefeated status within the Central Atlantic Collegiate Conference faced a stiff challenge as the women of Jefferson University arrived. The Lady Rams were ranked sixth in the NCAA Division II East Region, and they were looking to climb higher after knocking off number one University of the Sciences, also a member of the CACC.

Once 2020 Penn Charter graduate Kait Carter (now a CHC sophomore) opened the scoring on Thursday with a three-point field goal, the Griffins would lead the rest of the way.  Ahead by 13-point margins at halftime and again early in the fourth quarter, Chestnut Hill saw the gap narrow to five points (54-49) with seven minutes remaining, but the Griffins then outscored their guests 16-12 down the stretch to win, 70-61.

Carter went three-for-three from the three-point loop and posted four assists, six rebounds, and 16 points to share team-high scoring honors with junior shooting guard Lauren Crim, who shot four-for-eight from three-point range. Jefferson received a superb effort in the losing cause from freshman forward Cassie Murphy, who funneled in a game-high 30 points.

Both teams had entered the contest with overall records of 11-3. Afterwards, Chestnut Hill was 6-0 in the CACC, and Jefferson was 4-2.

Third-year CHC head coach Jim Connolly said, "It was a really good defensive effort, holding a team like Jefferson, as good as they are, to 61 points. We tend to be stagnant on offense, but tonight we were aggressive. We knew they would pressure us, so our job was to beat the pressure and attack. We got some easy lay-ups that way."

Prior to their actual meeting, the two teams' results against common opponents presented mixed indicators. Jefferson had lost to two teams that Chestnut Hill had beaten (West Chester and CACC member Georgian Court), while CHC had fallen to a pair of rivals (Molloy and Bloomsburg) that were both defeated by the Lady Rams.

The Griffins had taken Kutztown University to overtime before succumbing, while Jefferson lost to the Golden Bears in regulation by 28 points. Of course, players popping in and out of COVID-19 quarantine had an effect on almost every franchise.

The previous weekend, the Griffins had had six players sidelined due to medical problems, but three of them had returned to action by the time Jefferson arrived last Thursday. The Lady Rams had two of their own players out of action, both freshmen.

From the right wing, CHC's Carter lobbed in a three-point shot to start the scoring. Fouled on the outside a little later, she netted two of three free throws, and senior forward Bri Hewlett, junior forward Lindsay Lane, and junior shooting guard Lauren Crim had also gotten in on the scoring.

Just past the middle of the first quarter, a drive by Crim put the hosts up 16-8, and CHC sent in two players off the bench. One was veteran senior guard Cassie Sebold, who had worked through COVID-19 exposure protocol and was now in her second game of eligibility.

Coach Connolly noted, "Cassie [six assists] did a great job coming off the bench. We're still getting her minutes up, and Abbey Spratt (also a senior) has been doing a good job at point guard."

Subbing in at the same time as Sebold was freshman post player Emily Chmiel.

Senior forward Leah Miller had averaged over 16 points and 10 rebounds a game for Chestnut Hill over the first eight games of the season. After she suffered a knee injury, Chmiel and another 6'2" rookie, Emily Sekerak, had to help fill the gap.

"We have a great group," Connolly said, "and everyone has stepped up when we needed them, especially since Leah got hurt. Our two freshman bigs have been playing well, and they gave us great minutes tonight."

Late three-pointers from Carter and Crim helped the Griffins take a 24-16 lead into the second quarter. Jefferson's freshman starter in the post, the six-foot Murphy, had six points in the first frame, and she would be the lynchpin of the visitors' offense, especially in the second half.

Murphy was held to four points in the second quarter, but for the early part of the period, the CHC offense languished somewhat, as well. With almost six minutes gone, a pair of made free throws by Jefferson sophomore Haley Meinel got the Lady Rams back within four points of the leaders, 30-26.

With five different players finding the basket during the second round, the Griffins began to expand their lead again. Spratt and Sekerak hit lay-ups, and at the end a three-pointer and a shorter jumper by Crim lifted the hosts to a 13-point halftime margin, 39-26.

Early in the third round the Griffins' lead grew as large as 15 points, but later it dropped down to eight during a quarter in which Murphy hit five lay-ups and added two more points on foul shots. However, it was a three-point bucket by her teammate Emily Keehfuss that closed up the score to 47-39 with three minutes remaining.

The Griffins countered. Carter stole the ball and scored on a breakaway, and then she assisted on a basket from the paint by Chmiel. The score would be 52-41 for the start of the final 10 minutes.

CHC senior forward Bri Hewlett, who had made a number of impressive scoring moves, netted the first field goal of the final frame to push the lead back to 13 points, where it had been at halftime.

After this, Jefferson began its most threatening run of the evening with a lay-up by Murphy. Another Lady Ram stole the ball back, and when she missed a lay-up, Murphy was there to rebound the ball and score. Fouled during the sequence, she also made the free throw, tightening the score to 54-46.

With 7:22 remaining Meinel bagged a three-pointer from the left wing, and Chestnut Hill, now ahead by just five points, called time-out.

When play resumed, Chmiel extended her customary shooting range to hit a jump shot from around the foul line, then Hewlett stuck a 10-footer. The teams traded baskets to make it 60-51, then Murphy struck again for Jefferson with a lay-up and free throw.

CHC had managed to slow down the Lady Rams forward on occasion; as she faced away from the basket and looked to pivot toward the hoop, the Griffins had Sebold come in from the front and try to strip the ball.

After it became a six-point game at 60-54, a Sebold pass got Carter loose for a transition lay-up, and she made a free throw as well with 4:59 to go. A little over a minute later, Jefferson subbed for Murphy in an effort to put more pressure on the Griffin ball handlers.

Later, with the clock under three minutes, visiting sophomore Morgan Robinson's breakaway lay-up made it 65-58. Jefferson regained possession by stripping a Griffin of the ball, but then turned it back over with a walk. Sebold put in a short jumper from the lane, and the Lady Rams' aim was off on a three-point shot at the other end.

The Griffins got nothing at the other end as they were called for a charge, but once again Jefferson missed a shot from the floor with the game now in its final minute. Crim pretty much closed the door on the Lady Rams when she drained a "three" from the left corner with 33 seconds left, setting the score at 70-58. The final score was locked in when Robinson was fouled on a successful drive and scored Jefferson's last point from the free throw line.