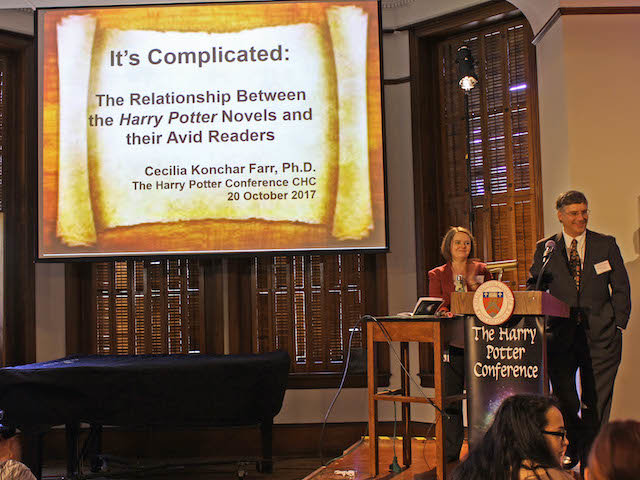 Though Chestnut Hill was forced to change the name of the former Harry Potter Festival last year, there are still ways for Hillers to celebrate The Boy Who Lived during Witches and Wizards weekend. One such example is Chestnut Hill College’s annual Harry Potter Conference, which will be held on the school’s campus this weekend for the eighth straight year.

This academic, nonprofit conference, held on Friday, Oct. 18, and Saturday, Oct. 19, provides a forum for scholarly presentations arising out of J.K. Rowling's popular best-selling series. Faculty and students have been invited to submit paper proposals or pieces of artwork to present at the conference, which is free and open to the public.

The featured speaker this year is Lana Whited, Ph.D., a professor of English at Ferrum College. Her presentation is titled “Here Be Dragons (and Phoenixes): A Thematic Direction for Fantastic Beasts,” and will be held on Saturday at the East Parlor from 9:20 to 9:50 a.m. The plenary lecture will be given by Sarah Hentges, Ph.D., an associate professor of American Studies at the University of Maine at Augusta and a Fulbright Scholar. From 1:40 to 2:20 p.m. on Friday, she will hold her presentation, titled “Girls on Fire: Intersectional and Transformative Heroines in American Dystopia,” also at the East Parlor.

Additionally, CHC is pleased to once again add a special section to this year’s conference, which is open to paper proposals from high school students. Students are invited to prepare an essay of three to 10 pages analyzing a theme or character from the Harry Potter series, or an essay discussing how some element of the series extends into an academic discipline such as philosophy, science, etc.

This year, the college will be awarding three $10,000 scholarships (to be awarded in the amount of $2,500 over the course of four undergraduate semesters). The scholarship is only acceptable at CHC and is contingent upon a student's application and acceptance.

The Harry Potter Conference was first held in October 2012 as part of Chestnut Hill's former Harry Potter Weekend to provide an academic outlet for a serious – but always enjoyable – study of the themes in the Harry Potter series. It was based on an Interdisciplinary Honors course for undergraduate students taught by Patrick McCauley and Karen Wendling that ran from Fall 2009 to Spring 2012. The course used the Harry Potter series as an example of Bildungsroman literature to study the often competing influences of science, philosophy and religion on the development of truth and meaning.

A $15 registration is required for entrance to the conference. You can register online or on-site at the college. Only credit card payments will be accepted. Parking will be available on both days on the main campus and Sugarloaf. Parking is free on Friday and $10 a car on Saturday.

Visit HarryPotterConference.com for more information, including a full schedule of events. Further questions about the conference can also be directed to harrypotterconference@chc.edu

From Broadway and Tony Awards to Act II in Ambler