with two weight classes remaining in last Friday's Inter-Ac League meet, the visiting Quakers were leading 43-12. The final tally wound up at a more respectable 43-24 after SCH picked up points with a pin and a PC forfeit at those last two weights. 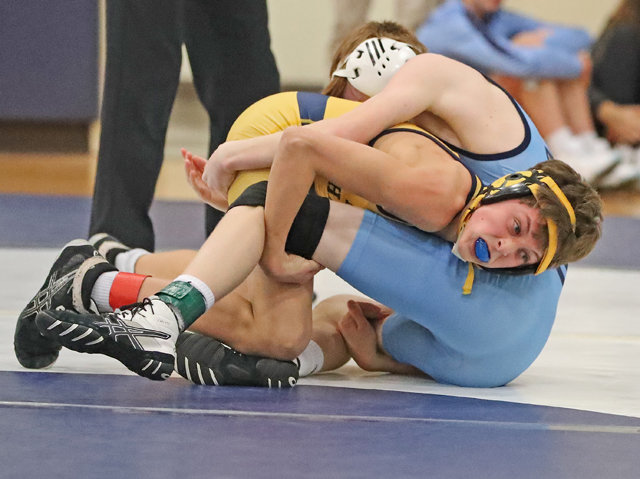 When one watched the action on the mat in many of the individual matches, there didn't appear to be a great difference between the wrestling teams from visiting Penn Charter and host Springside Chestnut Hill Academy.

Nevertheless, with two weight classes remaining in last Friday's Inter-Ac League meet, the visiting Quakers were leading 43-12. The final tally wound up at a more respectable 43-24 after SCH picked up points with a pin and a PC forfeit at those last two weights.

SCH recorded two pins in all and Penn Charter had three, and none of them came in the first period. The Quakers also won a major decision and a regular decision, but there were forfeits in half of the 14 weight categories. Neither team had anyone take the mat at 113 lbs. and 138 lbs.

Until just a few weeks ago, Penn Charter's grapplers had been competing almost exclusively in tournaments. After dropping a non-league dual meet at the beginning of January, the Quakers started in on their Inter-Ac schedule with losses to Haverford School and to high-powered Malvern Prep.

The SCH Blue Devils had seen a lot more dual meet action, coming into last Friday's encounter with a 7-4 mark. Like Charter, SCH had gotten off to an 0-2 start in the Inter-Ac, falling to Germantown Academy and Episcopal.

The random start procedure settled upon the 195 lb. class as the starting weight on Friday, and here Springside Chestnut Hill senior Will Neverosky took the mat against Charter junior Jack Glomb.

Takedowns and a three-point near fall sent Glomb into the second period with a 7-2 lead, but the score after two rounds was 9-6 after Neverosky recovered to score several takedowns of his own. The momentum continued to change in the third frame, which began with an escape and a takedown for Glomb that extended his lead to 12-6.

An SCH escape near the middle of the period had both wrestlers on their feet once more, and after Neverosky completed a takedown with 53 seconds left he got the pin with 29.8 seconds on the clock. 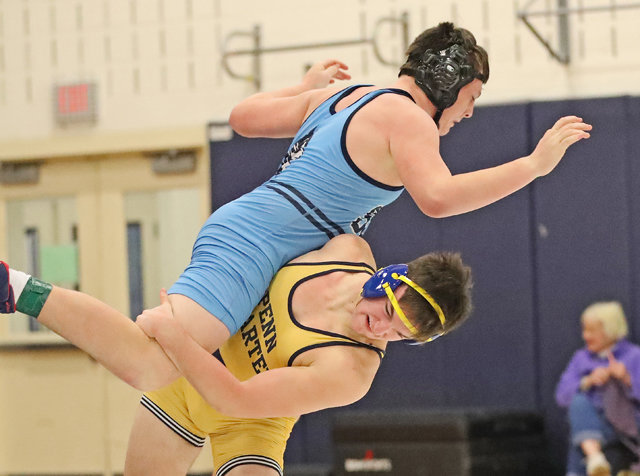 The Quakers would close up the team score to 6-4 with a major decision at 220 lbs. Senior Matt McGlinchey took control in a 7-1 opening period, then built up to a 12-2 final tally over the next two frames. His freshman opponent, Grant Guzik, was close to being pinned several times, but he kept the bout going until the end, yielding four meet points instead of six.

SCH then picked up six points to go ahead 12-4 when Penn Charter forfeited at 285 lbs. to sophomore Mac Levin. After this, however, the home side of the scoreboard would not budge until the final stages of the meet.

For the 106 lb. match spectators were dealt a pair of Jacks, as sophomore Jack Sanderson of the Blue Devils took on eighth-grader Jack Bowen of the visiting side.

After being taken down initially by Sanderson, PC's Bowen found his feet and brought a 3-2 edge into the second period. He gained some more separation with a takedown and a pair of back points that made it 7-2. A reversal on each side completed the scoring in a 9-4 decision for Bowen as the meet score tightened to 12-7.

No points accrued to either side as neither team sent out a wrestler in the 113 lb. class. The Blue Devils then slipped behind in the team tally, 13-12, as they provided no opponent at 120 lbs. for Quakers freshman George Glomb.

Springside Chestnut Hill freshman Tylor Stubbs quickly executed a takedown at the start of the 126 lb. contest, but he would only add one more point the rest of the way. Through a long series of near falls earned by Charter senior Jess Anderson, Stubbs managed to stay live, but he was in danger of giving up a technical fall as the score reached 17-3 in the third round. Instead, the match ended with a pin, as Anderson finally matted his man with nine-and-a-half ticks left on the clock.

In the 132 lb. class SCH forfeited to visiting ninth-grader Patrick Rullo, and the meet score stayed at 25-12 when there was a double forfeit at 138.

A takedown and near fall points got Quakers sophomore Tyler Mangan out to a 7-0 start against a freshman for the home team, Micah Ford. The grapplers were on their feet again for the start of round two. Mangan quickly scored a takedown, and after Ford fought out of one pinning combination, Mangan got the job done the next time, notching a pin with 40 seconds left.

The Blue Devils' 152 lb. entry, sophomore A.J. Topping, started out with a takedown against the third of the Glomb brothers, ninth-grader James. Glomb tied things up at 3-3 later on, then picked up a takedown right at the end of the first period to lead 5-3.

Soon after the second stanza began with Topping on the bottom, it was hard to predict who would score first as the two rolled back and forth across the mat. Topping appeared to gain the upper hand when he took the lead with a reversal and three near fall points, but later Glomb reversed and then chalked up a pin with a dozen seconds remaining.

Penn Charter's lead in the meet peaked when senior John Guiffrida accepted an SCH forfeit at 160 lbs., spreading the score to 43-12.

The Blue Devils could simply hope to make the final score a bit closer, which they were able to do.

At 170 lbs., a takedown near the end of the first period gave Springside Chestnut Hill sophomore R.J. Moore a 2-0 edge against visiting junior Daniel Bach. On the bottom for the start of the next round, Moore smoothly transitioned from a reversal into a pinning combination, wrapping up the bout 29 seconds into the period. SCH junior Tyler Guzik then collected a Penn Charter forfeit in the 182 lb. class, locking in the final score at 43-24.