After playing several summer league basketball games in which they led most of the way but faltered at the end, the Chestnut Hill College women on Team Orange finished victorious last Thursday. 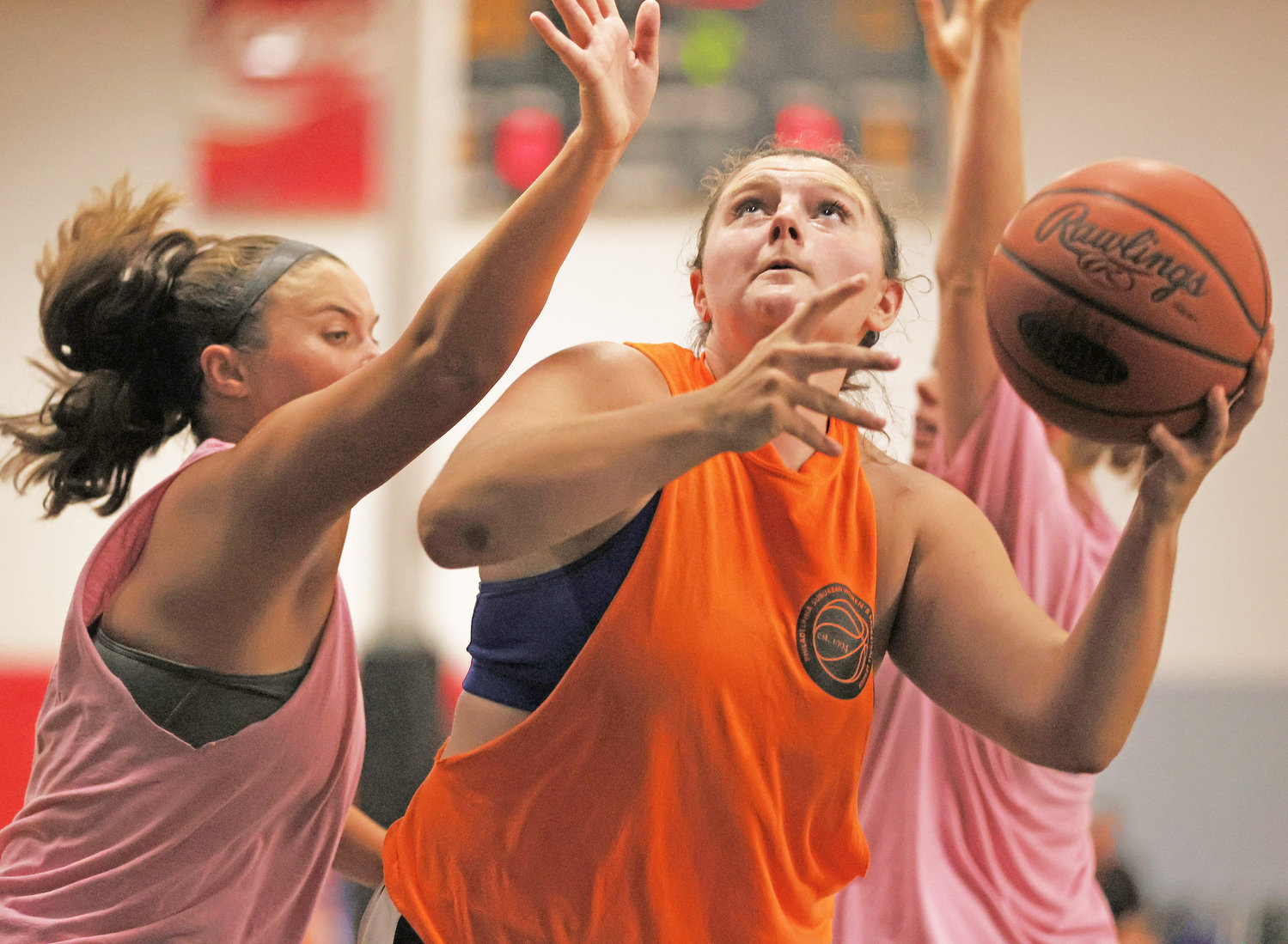 Brianna Hewlett of Team Orange, a Chestnut Hill College senior, gets off a lay-up while avoiding a defender. (Photo by Tom Utescher) 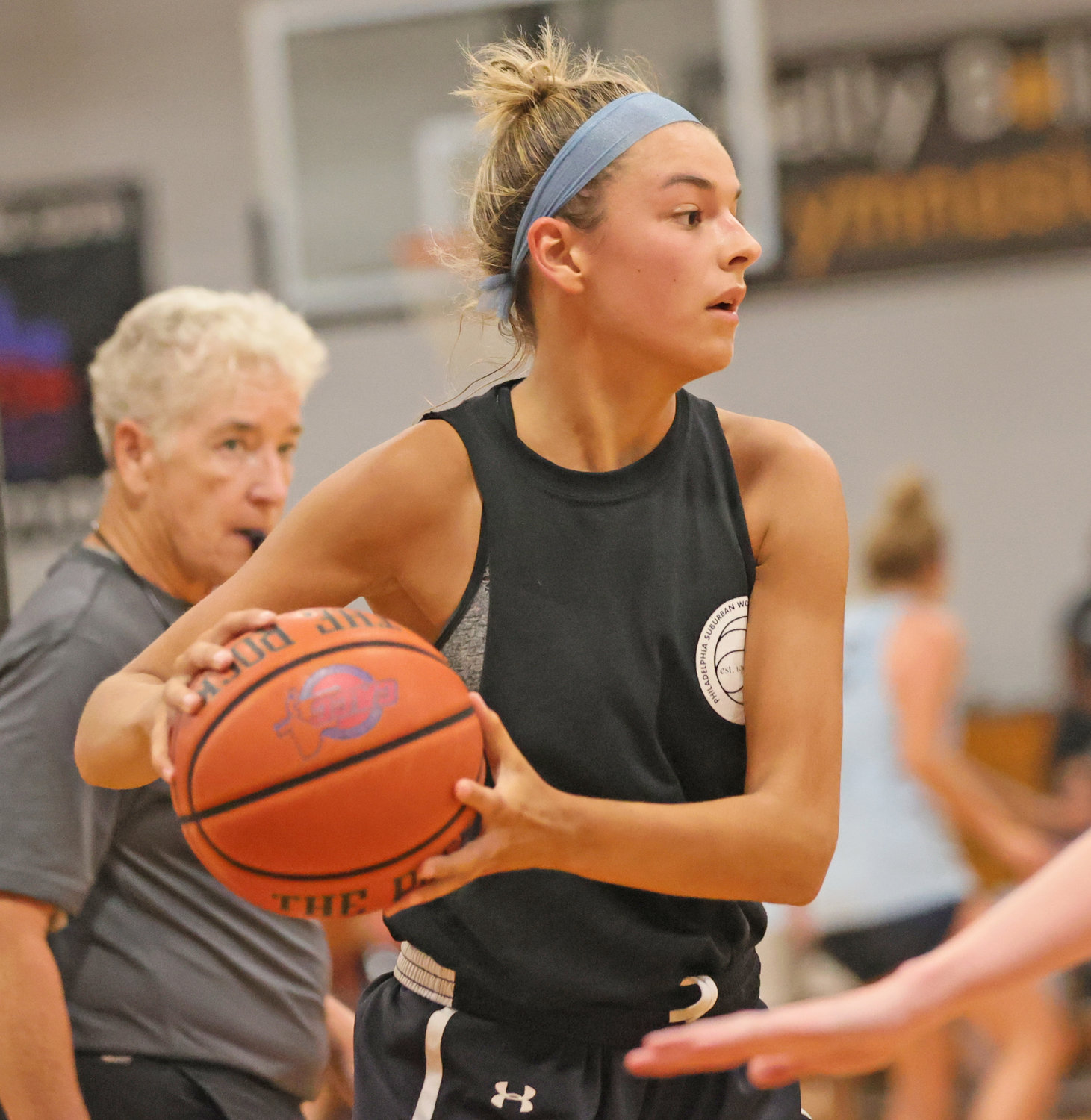 Haley Meinel, a Jefferson University senior playing for summer league leader Team Black, protects the ball as she looks for a cutter heading to the basket. (Photo by Tom Utescher)
Previous Next
Posted Thursday, August 5, 2021 8:30 am
by Tom Utescher

After playing several summer league basketball games in which they led most of the way but faltered at the end, the Chestnut Hill College women on Team Orange finished victorious last Thursday evening, July 29. Moving up out of a 43-43 tie in the middle of the fourth quarter, the warm-weather Griffins posted a 50-47 win over Team Pink, staffed largely by alumni of the University of the Sciences.

It was the final night of the regular season, and Jefferson University's Team Black finished 7-0 thanks to a 74-53 win over Team Royal Blue. Royal's roster is chiefly comprised of athletes from Ursinus College, although two Ursinus players out of Germantown Academy, sisters Charlotte and Sarah DiLello, were not on hand last Thursday.

In the first round of playoffs this week (quarterfinals) top-seeded Black will meet number eight Team Red, powered by players from Division III Arcadia University. Orange's win on Thursday enmeshed the CHC ladies in a three-way tie in the middle of the pack in terms of win-loss records, all of these ballclubs winding up 3-4. After going down several steps in the list of tiebreaking criteria, it was eventually determined that Orange would be seeded fifth and would open the playoffs against number four Team Sky Blue. Sky Blue's roster features hoopsters from Holy Family University, which plays in the NCAA Division II Central Atlantic Collegiate Conference (CACC), along with Chestnut Hill, Jefferson, and USciences.

Like the Orange and Pink teams, Sky finished 3-4 and became part of the scrum for fourth place. Sky Blue had beaten Orange head-to-head at the beginning of July, 60-51, and they were seeded fourth, ahead of Orange and number six Team Pink. Royal Blue and its brace of DiLellos wound up seventh, lining up in the playoffs against second-seeded Team Maroon (6-1) made up of current USciences players.

Last Thursday Orange got behind early, as the Pink USciences Old Devils opened up with three consecutive three-point field goals. A 15-footer by junior Lauren Crim got summer CHC started, and a free throw by senior Abby Spratt and a shot from just below the top of the key by junior Trinity Brittingham followed.

Later on, freshman Brianna Rider hit a lay-up and a jumper, and then she scored in transition off of a pass from Kait Carter, a 2020 Penn Charter graduate. The period concluded with scores from the paint by freshman Emily Chmiel and her classmate, Rider, getting Orange back within a point of the leaders, 15-16.

In round two, senior Breanna Hewlett put in a jump shot and a lay-up in transition, and CHC received two points apiece from Brittingham, Chmiel, Crim, and junior Lindsey Lane. Orange enjoyed a 27-25 halftime advantage.

By the end of the third quarter, the CHC squad's edge was down to just one point, 37-36. Rider scored off a steal and then lobbed in a "three," but Pink produced several treys of its own, tying the tally at 36 all before Chmiel scored the final point of the period from the free throw line.

Team Pink was ahead by two points on two occasions as the fourth quarter unfolded. After the second instance, Orange had Lane and Hewlett each make the second of two free throws to knot things up at 43-all. Crim put in a runner from the middle of the lane and Brittingham stole the ball back and scored to make it 47-43.

Pink scored on a drive, but Spratt recouped those two points from the free throw line with nine seconds to go. Pink put in another lay-up to pull within two points once more (50-48), then fouled immediately to keep some time on the clock. With five seconds remaining Brittingham made one shot from the stripe to put the final score on the board, and the Old Devils missed a shot heaved from three-point range just before the buzzer.

Rider's 13 points and Hewlett's 11 led Team Orange, which received seven apiece from Brittingham and Chmiel, six points from Crim, and three each from Lane and Spratt.