Both Chestnut Hill and Mt. Airy experienced some unusual crime this week, with an overnight burglary at Baker Street Bread and El Poquito Sunday that left the contents of a broken cash register … 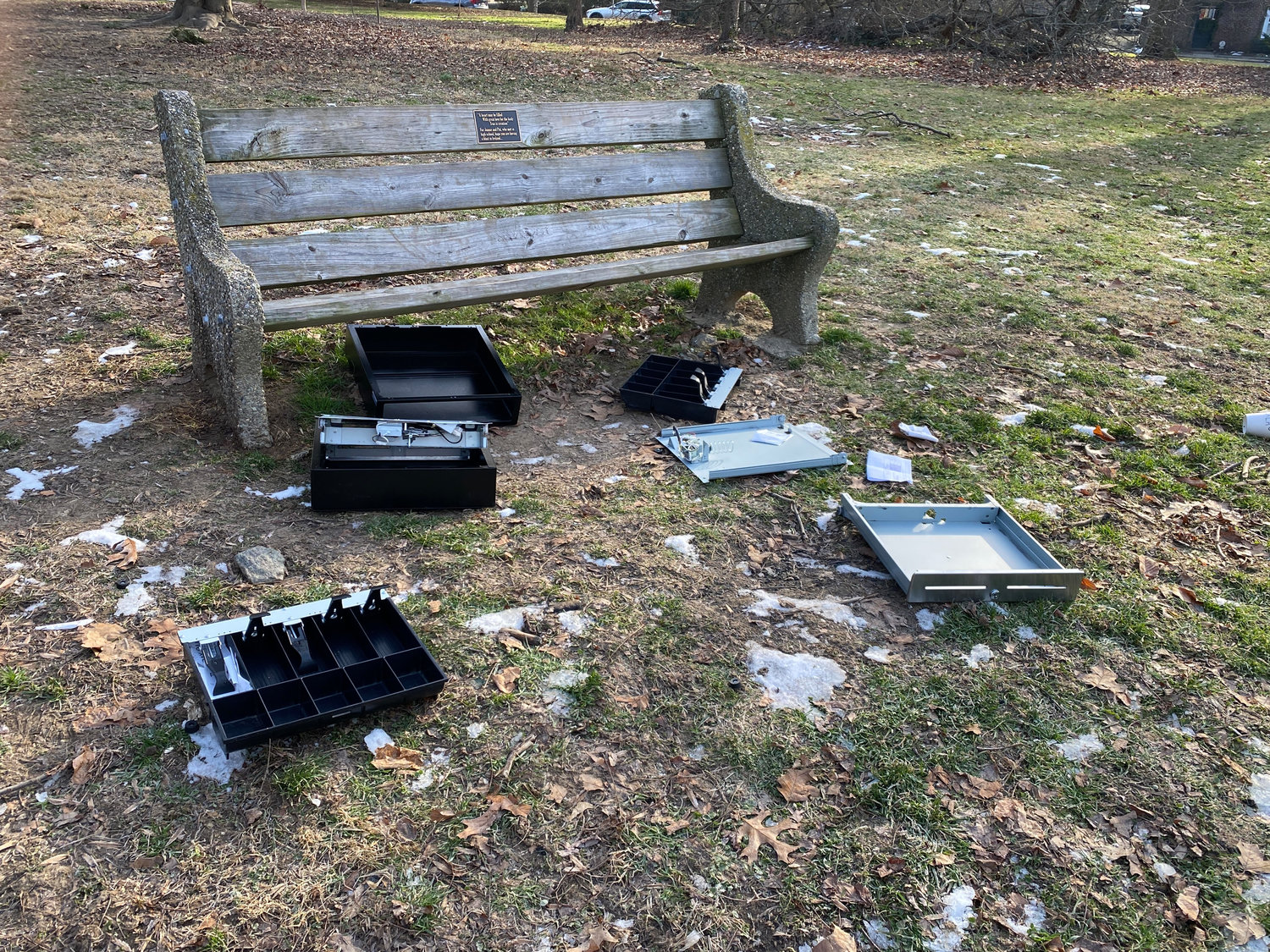 An overnight burglary at Baker Street Bread and El Poquito Sunday that left the contents of a broken cash register fluttering around Pastorius Park. (Photo by Tom Beck)
Posted Wednesday, January 19, 2022 6:00 am
by Carla Robinson

Both Chestnut Hill and Mt. Airy experienced some unusual crime this week, with an overnight burglary at Baker Street Bread and El Poquito Sunday that left the contents of a broken cash register fluttering around Pastorius Park, followed by an attempted car-jacking Thursday on Cherokee Street near Upsal, in which the victim, an elderly grandfather, turned tables and shot his would be attacker first.

According to Phil Dawson, director of the Chestnut Hill Business District, both burglaries on the Avenue - which occurred within two blocks of each other near the intersections of Hartwell Lane and Willow Grove Avenue - are believed to be committed by the same suspect. He was described as wearing sweatpants with an Adidas logo, black sneakers, a hood, a ski mask, ski goggles and a winter coat. Sex and race are unclear, but the suspect looked to be 5'9", a young adult, and drove a bicycle with thick tires and two distinctive reflectors on the back tire. There is believed to be an accomplice.

Baker Street owner Tom Ivory said the perpetrator knocked out the security camera and used a crow-bar to open the front door. Whoever it was made off with the cash register - with the employee’s tip cup inside.

“We found out when we got here this morning,” he said on Monday. “This has never happened before in the 30 years I’ve been here. And the police have been great. We’re lucky to have good patrol officers around here.”

The attempted carjacking happened around 7:30 p.m. on Thursday. The victim, Oliver Neal, told police he was getting out of his car when he saw two young men approach him, one of which had a gun.

“He said 'give me the keys.' By then I had my hand on my weapon and saw him tighten his grip and I knew I had to shoot," Neal said in an interview with channel 6. "I think he shot first but I don't know. All I know is we went back and forth. I started shooting and next thing I know, he hops across the street, drops to the ground... I just kept shooting."

According to police, the teenager had been driving a Jeep that had been stolen in a different carjacking over the weekend.

The CHBD has been asking the 14th Police District to bring back the bike patrol officer that was removed last year and is asking for a meeting so that police and merchants can discuss ongoing concerns with crime.

Store owners who don’t already have security cameras, and want them, can get a 50 percent rebate on qualifying systems from the City of Philadelphia's Commerce Department. The Chestnut Hill BID also offers additional rebates.

Barbara Winkelman contributed to this report