As expected, the women of Jefferson University's Team Black rolled through the quarterfinal round of the college summer league playoffs last Thursday. 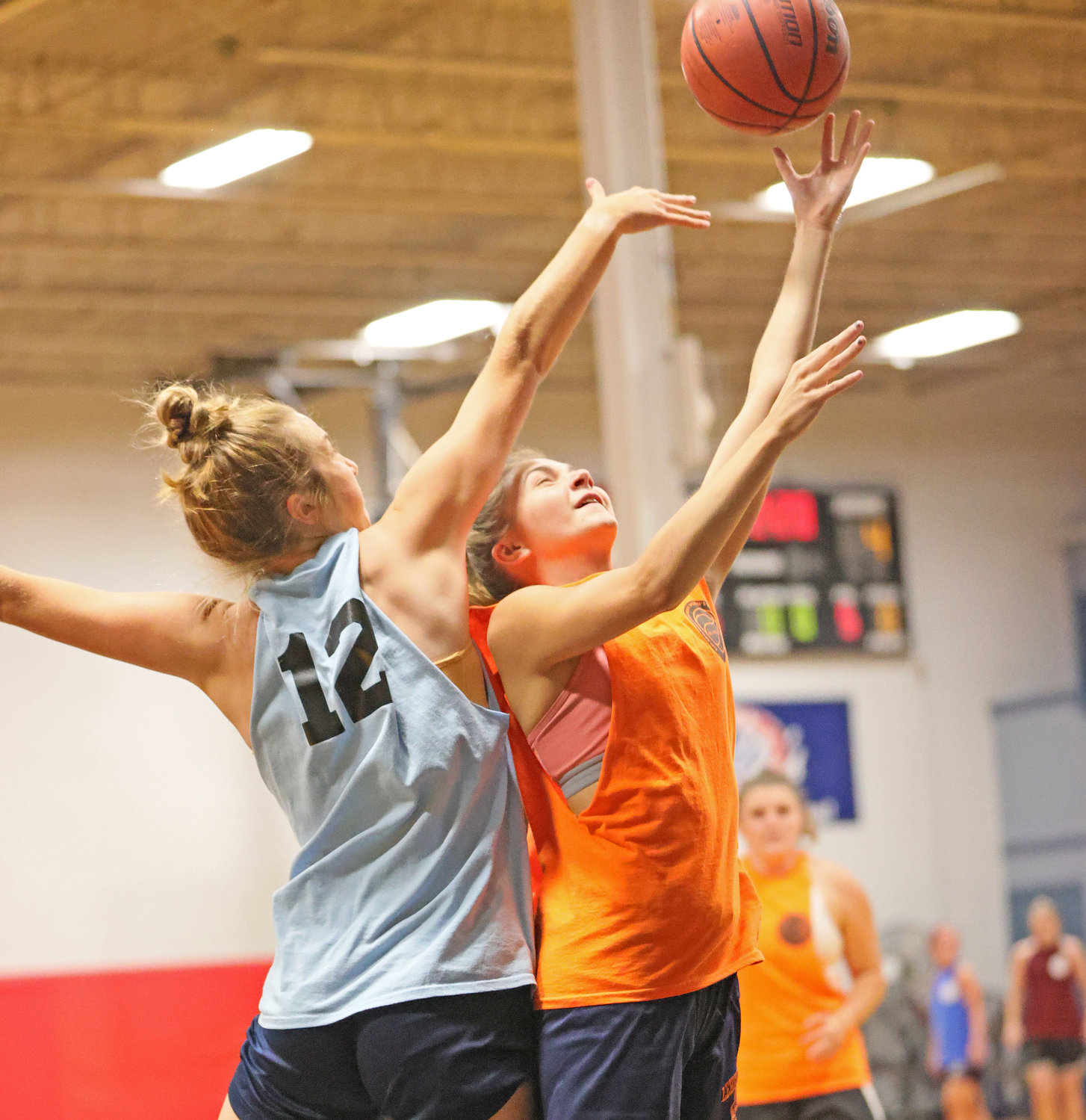 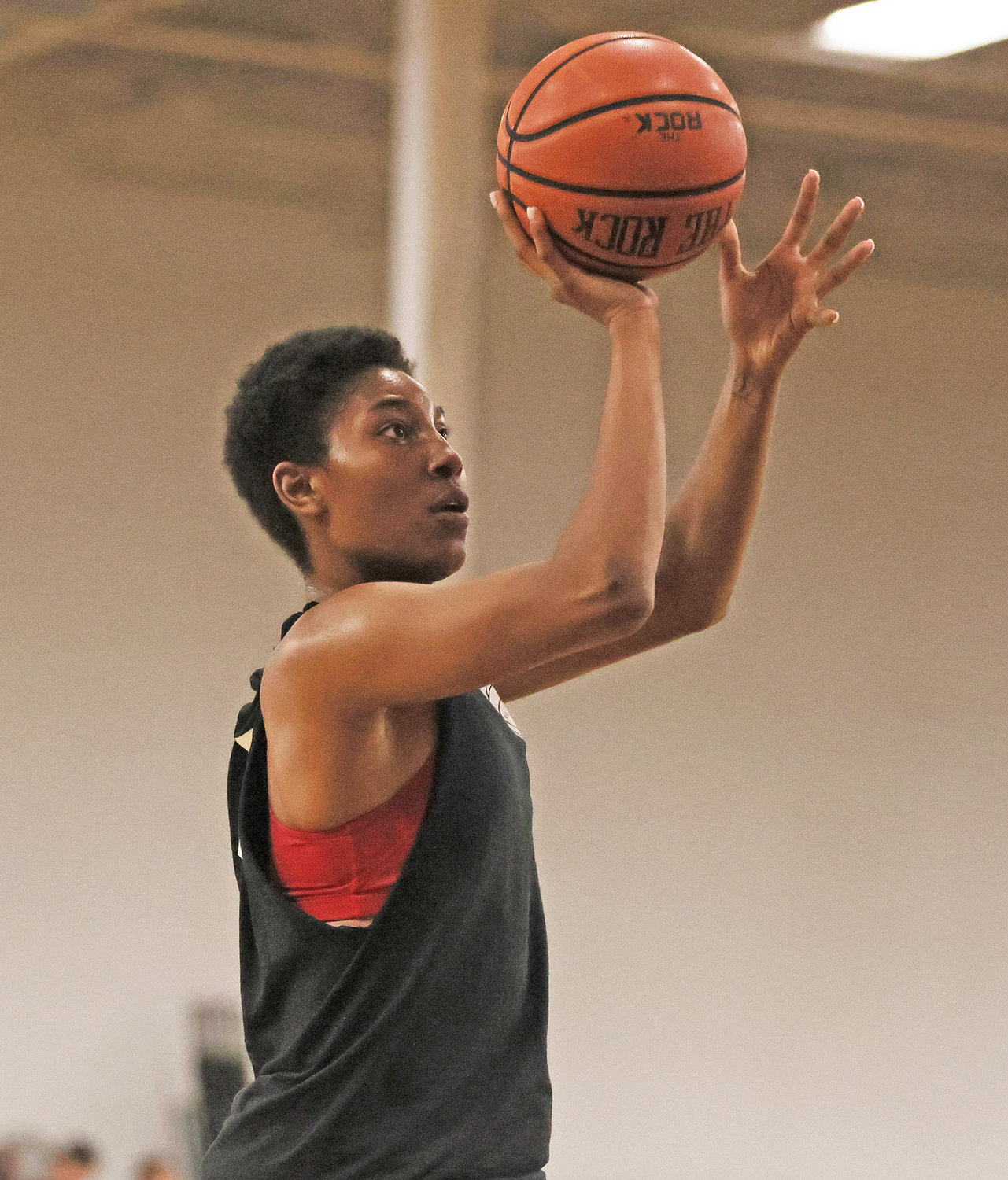 Sabria Lytes of Team Black (Jefferson University) shoots for two of her game-high 26 points in a quarterfinal game last Thursday. (Photo by Tom Utescher)
Previous Next
Posted Tuesday, August 10, 2021 8:00 am
by Tom Utescher

As expected, the women of Jefferson University's Team Black rolled through the quarterfinal round of the college summer league playoffs last Thursday. Top-Seeded Black, with its complement of NCAA Division II athletes, romped to a 94-34 victory over number eight Team Red, whose roster consists almost entirely of players from Division III Arcadia University.

Chestnut Hill College, in its summer guise, Team Orange, reached the semifinals for the first time since it began to play in the league. Facing another group of Division II players, Team Sky Blue (all from Holy Family University), fifth-seeded Orange overcame fourth-ranked Sky, 72-64, after leading by just one point at halftime.

This was merely a minor upset; a more significant one occurred in the three vs. six contest, in which lower-seeded Team Pink (alumni of the University of the Sciences, with a few Division III women mixed in) posted a 45-33 win over Team Kelly Green. The Kelly club consists mostly of players from Kutztown University, with a sprinkling of talent from other Division II schools.

After furnishing the Orange CHC squad with just two points in the opening quarter, freshman post player Emily Chmiel went on to accumulate a game-high 20 points. Despite six points in the first quarter from another freshman, guard Morgan Sterner (10 points total), the summer Griffins trailed Sky at the end of the first 10 minutes, 15-18.

Playing better defense in the second round, Orange got six points from Chmiel and five from senior guard Morgan Orloski (seven points total) to slip ahead by halftime, 30-29. Orloski gave the Griffins that edge with a three-pointer from the left wing with 11 seconds remaining.

Three-and-a-half minutes into the third quarter, Team Orange enjoyed the first double-digit lead of the evening, going up 39-29 on a trey by freshman guard/forward Brianna Rider (five points). Senior Lauren Crim and junior Trinity Brittingham, both guards, also connected from the three-point loop, and with Chmiel adding inside scoring, Chestnut Hill was still ahead by 10 points at the three-quarter mark, 55-45.

There were early buckets for the Griffins by Brittingham (five points) and senior forward Brianna Hewlett (eight) as the fourth quarter got going, but five minutes in, Sky Blue was back within six points, 59-53. Chmiel traded baskets with Sky, then she scored again in a transition sequence to raise the lead to eight points.

With the clock down to three minutes, Sterner drove the left baseline to give Orange a 10-point margin once more. The gap narrowed to seven points with a three-pointer by the Holy Family cadre, then Sterner made good on another baseline attack, making it 67-58 with one minute and 40 seconds to go.

Sky Blue now scored consecutive field goals, with a drive out of the set offense followed by a transition lay-up. The summer Tigers now had the lead down to five points (67-62) with 1:16 on the ticker. Kait Carter, a Penn Charter grad who is heading into her sophomore year at CHC, fed a pass from midcourt up to Chmiel heading into the paint. The reliable newcomer cashed in once more, giving Orange a little more breathing room going into the final minute. This would prove to be the final field goal of the evening.

When Sky Blue missed a shot at the other end, the Griffins brought the ball back up the floor and passed it around the perimeter to drain the clock. Sky eventually fouled CHC senior guard Cassie Sebold (nine points), and the score spread out to 71-62 when she made two free throws with 32 seconds showing.

As Sky Blue came up the court, Sebold stole the ball back for Orange in the middle of the floor. Making one of two foul shots, she levered the lead out to 10 points (72-62) with 16.6 seconds remaining in the game.

From the foul line, Sky Blue's Carolyn Prevost put the last two points on the board with nine seconds left. Crim and senior Abby Spratt each finished with three points for the winners.

Team Orange moved on into this Wednesday's semifinal round. CHC's opponent will be second-seeded Team Maroon (current USciences players), which won its quarterfinal game, 48-29, against number seven Royal Blue, which is made up mostly of Division III Ursinus College players. In Royal's swansong the team received three points apiece from the DiLello sisters out of Germantown Academy, Charlotte ('21) and Sarah ('20).

The former USciences players on Team Pink will take on undefeated Team Black from Jefferson. The summer Lady Rams never looked back in their quarterfinal game after seizing a 31-8 advantage over Team Red in the opening quarter. Black got 26 points from post player Sabria Lytes and six three-pointers and 24 total points from Haley Meinel. Sam Yencha and Bridget Arcidiacono added 17 and 15 points, respectively, for the winners.

Arcidiacono's cousin, Jenn (Arcidiacono) Stice, is a Springside School graduate ('10) who went on to row at the University of Alabama.

The summer league championship game will be played on August 12, the day after the two semifinal bouts.