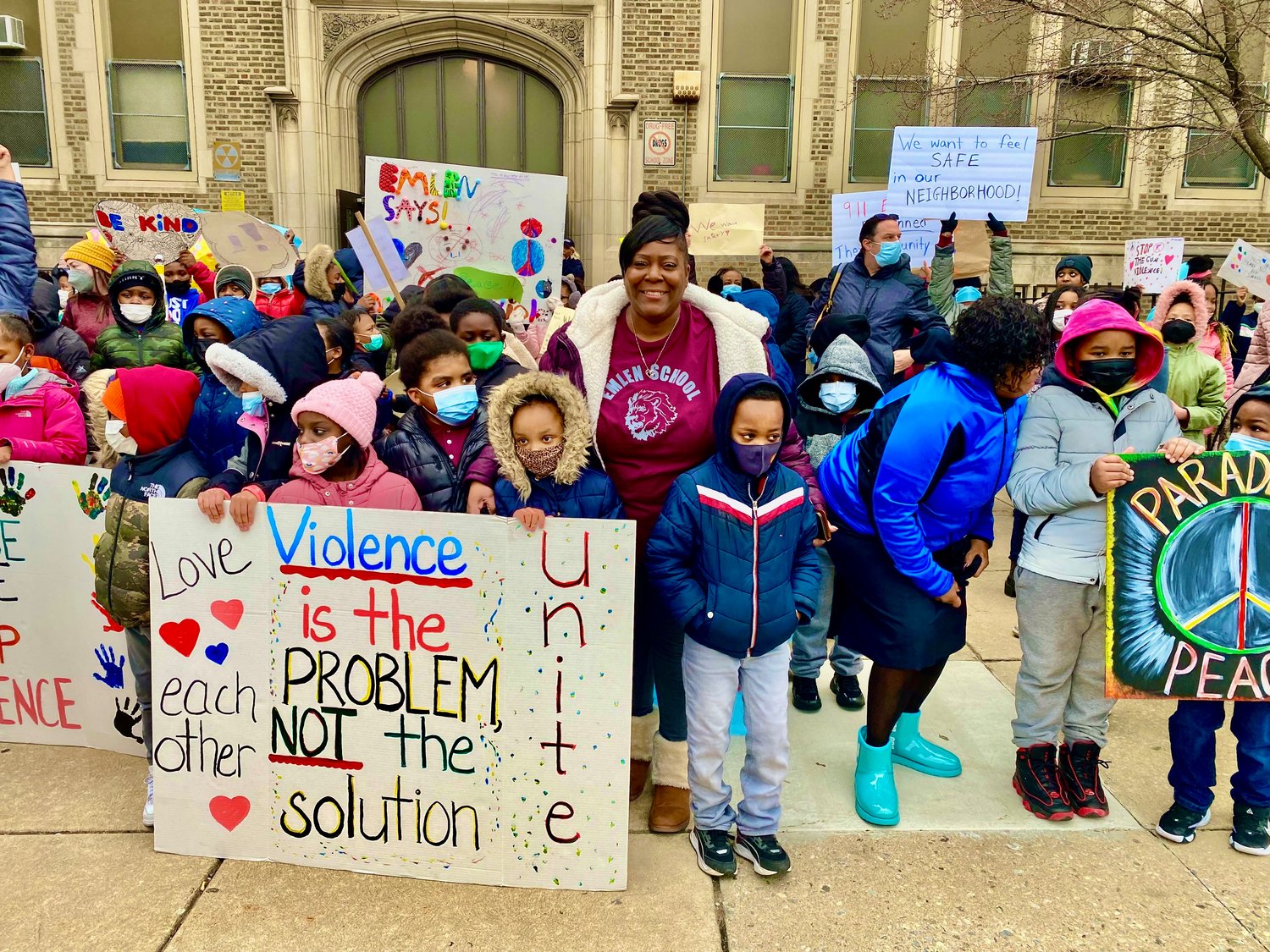 Principal Tammy Thomas is seen in February during her students’ “March for Peace.” Every student at Emlen was asked to make a poster or banner about what peace means to them.
Posted Thursday, April 21, 2022 12:00 am
by Len Lear

Talk to anyone who knows Tammy D. Thomas, principal of Emlen Elementary School in East Mt. Airy, and they will tell you that the 2022 Lindback Distinguished Principal Award, which she received last month, could not have gone to a more deserving person.

“We work closely with both the Emlen and Jenks Schools,” said Carol Bates, of the Rotary Club of Chestnut Hill, “and I can tell you that principal Thomas is an amazing, remarkable person. Her energy, enthusiasm and commitment are wonderful.

Thomas spoke at a Rotary Club meeting several years ago and so impressed the audience that the club began “helping and supporting Emlen immediately and haven’t stopped,” Bates continued. “We have seen her indefatigable spirit, leadership, generosity, vitality and drive again and again!”

Thomas said she felt honored that her work has been recognized by the School District and the Lindback Foundation Committee.

“It brings me joy to know that the work of educating our students and supporting our staff and families is acknowledged by others,” she told us.

Maggie Stoeffel, president of the Rotary Club of Chestnut Hill, said club members were thrilled - but not surprised - that Thomas had won the award.

“Our club enjoys a close relationship with principal Thomas and the staff at Emlen School,” Stoefeel said. “Our volunteers work on school beautification projects, distribute backpacks at Open House, tutor in the classrooms, and donate and distribute dictionaries to all third graders. We are able to witness first-hand the impact that Principal Thomas has on Emlen School and the community.”

Thomas conveys a warmth and enthusiasm that are infectious, with a spirit that makes people feel as if they are a part of the family, Stoeffel continued.

The principal embraced volunteers and gave them Emlen T-shirts when the group came to the school to work in the yard, Stoeffel said, adding that “Thomas turned the event into a community affair, greeting and engaging all passers-by ... She is a force for good in our community!”

The Lindback Distinguished Principal Award is given each year to a small number of public school principals. It comes with $20,000 for school improvement projects, and recognizes principals “who lead and serve with equity principles  ...  dedicating their time and efforts to public service to benefit the school and community.”

Thomas grew up in Paulsboro, NJ. She earned a bachelor’s degree in elementary education and dual master's degrees, all from Cheyney University which spans Chester and Delaware Counties. After many years of teaching, Thomas became an assistant principal at various schools in the district before becoming principal of Emlen in 2013.

Thomas told the Local that she grew up in a predominantly white neighborhood, where “people thought that students who looked like me would never make it,” she said.

“Becoming a teacher and principal and winning this Lindback Award shows them how wrong they were, and I am so grateful to receive it.”

Thomas said the Lindback Award is also particularly gratifying because of a previous teaching job she lost, which she thinks was due to her skin color.

It happened in 1993, when a recruitment team from a school district outside the city was looking to diversify its teaching staff. Thomas was hired. But then, on a hot day in August of that year, as she was setting up her classroom, “there were several parents who approached me as they registered their child for the upcoming school year,” she said.

Repeatedly, she said, they asked her “Who are you?” she said. Her  response was always the same. “I smiled proudly and said 'I’m the new first grade teacher.'

“Soon after that I received a call from the [district] stating that 'your services are no longer needed,' and just like that, in the blink of an eye, I thought my career as a teacher had ended before it had even begun!” she said.

But instead, Thomas excelled. And now, the only thing she regrets about her prestigious award is that her late grandmother is not here to see it.

“I lost her when I turned 16,” she said. “She and I were very close. She never had the chance to see me graduate from high school, let alone college. I was the first person in my immediate family to even go to college, but my grandmom always instilled in me the value of education and the need to always do your best.”