The Philadelphia Cricket Club’s sign.[/caption] by Hugh Gilmore Matthew Duques, a professor and new resident of Chestnut Hill who identifies himself as a “social critic,” wrote to this … 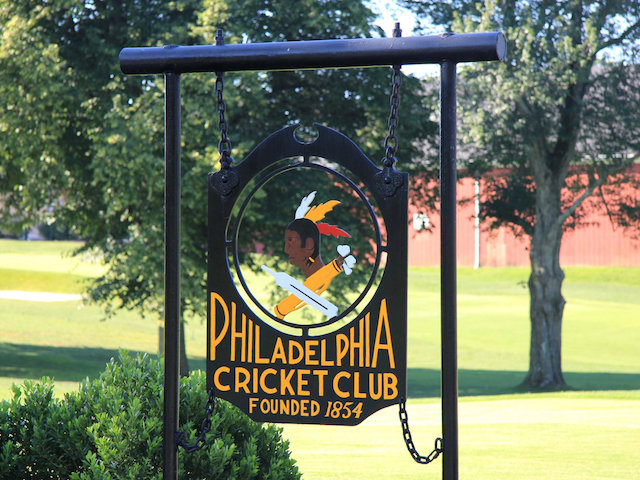 Matthew Duques, a professor and new resident of Chestnut Hill who identifies himself as a “social critic,” wrote to this newspaper recently with a concern. A “critique,” actually. He asks why American Indian tribe names are used to name “the tony backstreets that descend toward the peaceful haunts of Valley Green.” Taken together with the “sprawling Cherokee apartments” and the American Indian face used in the Philadelphia Cricket Club logo, he sees a situation that warrants discussion.

He wrote, “I suppose all I wonder here is if Chestnut Hill residents ever have had a thoughtful conversation about the area’s American Indian History and about current representations of and by American Indians.” The results of such a conversation, he suggests, would help move along the “justice and equity” to come.

That last part, I assume, means that Duques feels that the American Indian street names, apartment complex name and club logo represent an injustice and inequity to Native Americans. He doesn’t say the offense is deliberately given, but suggests that it is there through a lack of awareness or sensitivity. And he has offered to sponsor the aforementioned community conversation. Which, one would further infer, might lead the community to change the American Indian names and remove the logo from the Cricket Club’s signage.

In a way, the professor’s remarks caught me by surprise. I say that because the literal answer to his first question is easily available. The street names of Chestnut Hill, like those everywhere, have a specific history, and lots of books lay that history out. I’m not a local history expert, but I do have an interest in our community and have done some reading on the subject. For example: “The Chestnut Hill Almanac. Number 1: Street Names of Chestnut Hill,” by Jefferson M. Moak (1986); “A Walking Tour of the St. Martin’s Area of Chestnut Hill” by Andrea Graddis for the Chestnut Hill Historical Society (no date); “Suburb in the City: Chestnut Hill, Philadelphia, 1850-1990” by David R. Contosta (1992). Additionally, on Sept. 6, 1979, the Local published an article titled “Chestnut Hill Streets named for Mills, Residents, Indians.”

In sum, these writings say that the famous Houston and Woodward families founded the western part of Chestnut Hill. They built and donated the Wissahickon Inn (now Springside Chestnut Hill Academy), the Philadelphia Cricket Club and St. Martin-in-the-Fields Church. After that, they built several hundred homes in what was originally named Wissahickon Heights (later named the St. Martin’s region.).

At the time Henry Houston originally planned this community, the city had named the north-south streets according to numbers, roughly ranging from 22nd Street on the east to 38th Street on the west side. By the 20th century, by gradual petition, all these numbered streets were renamed. Gertrude Woodward, Houston’s daughter, is said to have particularly requested the American Indian names that caught Duques’ attention.

Thus, for example, 27th Street became Shawnee Street, 29th Street became Navajo Street and 30th Street became Seminole Avenue. No written records support this oral tradition of Woodward being the namer, but it might be true, given that she was a devoted and sympathetic supporter of Episcopalian missions to the American Indians. This was also, now that the western frontier had vanished, an era that marked the flowering of a romantic reimagining of the American Indians as “Noble Savages” who were in many ways superior to the corrupted denizens of cities. At its best, the American Indian street names of Chestnut Hill were meant to be a tribute to nearly bygone civilizations.

The question before us now is: Do these street names now represent an injustice or inequity to the Native American nations? Do Woodward’s kindly intentions (if such they were – and who could imagine otherwise?), matter in this present age of bruised sensitivities? Who is to decide? Nearly every city in the country has American Indian street names. And to make the decision harder, most of those names do not refer to a nation or tribe itself, but are corruptions of what outsiders called them.

Some of the uses of American Indian names, ideas and imagery are, indeed, quite offensive.

Rampaging braves, even as sports team avatars, are as odious as Fighting Irish and Lazy Mexicans. Worse still is the commercial exploitation of American Indian names and culture – Jeep Cherokee, Pontiac automobiles and Crazy Horse Malt Liquor, to name a few. Plus, all the “New Age” spirit catchers, powders, lotions, blankets and stolen concepts. Both the United States Patent Office and the Indian Arts and Crafts Board have had only limited success with stopping the trademark pirating (“Genuine Pima Indian blanket!”).

As for the “sprawling Cherokee Apartments:” I’d say they are a location indicator, playing off the street name – and not an advertising inducement to come live the Cherokee lifestyle.

And finally: the Cricket Club logo. The American Indian head depicted in the logo has gone through several stylistic changes over the years, but has always been a portrait of quiet dignity. In the Cricket Club’s published histories, I’ve found no mention of its origins or purpose. Though the club was founded in 1854, the Indian Arts and Crafts Board Indian head poised over a cricket bat and golf clubs would suggest a turn-of-the-century genesis for that logo, since the American Indians of 1854 played neither of those sports. It probably meant something when it originated (Healthy living though strenuous outdoor recreation?), but it doesn’t seem to signify much other than tradition today. Perhaps a member of the tribe or nation depicted by the headwear will claim it and file suit under trademark infringement.

But injustice? Inequity? If the suggested conversation ever happens, it will be interesting to attend.