Margaret and Howard Shapiro (in the background) with Ali Hussaini (seated, right) his wife Nahid (seated, left) and their children Maria (background) and Aryan (foreground). (Photo by Ted Goldman) … 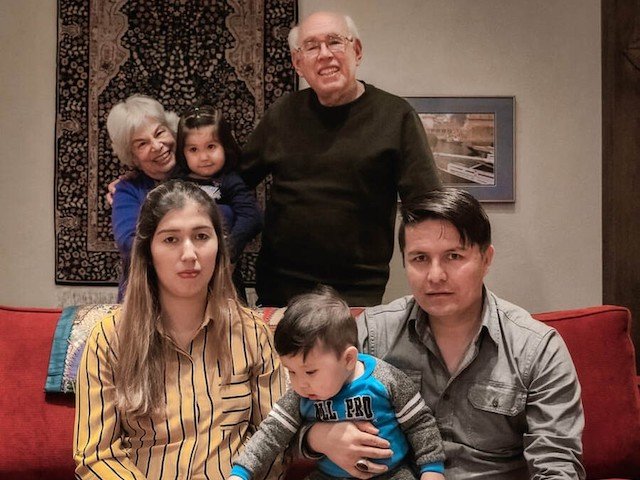 Margaret and Howard Shapiro (in the background) with Ali Hussaini (seated, right) his wife Nahid (seated, left) and their children Maria (background) and Aryan (foreground). (Photo by Ted Goldman)

This opinion piece is an excerpt from a photo essay by Ted Goldman at TGoldmanPhotography.com. It has been edited to conform in style to a more traditional newspaper style.

Initially, I didn’t think about looking for the humanity of Americans who help immigrants and refugees – the evening news convinced me that there wasn’t much to find, but this, too, is a false narrative. Our political discourse has allowed these false narratives to take the spotlight: immigrants and refugees coming to do harm and Americans wanting to wall them out. As Congressman Elijah Cummings recently said: “We are better than this!”

This story is about Ali and Nahid Hussaini who came to the U.S. three years ago because Ali had been targeted by the Taliban as a result of his work as a translator for the Army.

This is also a story about Mt. Airy residents Margaret Shapiro and Howard Bilofsky, who have gone beyond offering aid and comfort. They’ve taken the Hussaini family into their lives. It’s so easy to miss that there is a lot of American humanity towards immigrants and refugees.

Margaret and Howard invited me to their home to meet Ali and Nahid and their small children, Maria, 2, and Aryan, 1. When the Hussainis arrived I expected something formal between clients and their supporters. What I saw instead looked like grandchildren visiting their grandparents. There was hugging, laughter and presents waiting for the children who took over the house. Margaret and Howard seemed to love every minute. I was in awe of this welcoming environment. Walls and travel bans were a million miles away. We sat down for a wonderful meal. Nahid brought some of her specialty dishes as well.

As a child, Ali lived in a constant state of war and in fear of the Taliban.

Ali’s family was lucky that they had the money to buy their way into Pakistan. Others were not so fortunate.

“If you had money you could go easily, but the people without money went to Iran where they were tortured, sold or held as hostages to work in the farms, but luckily we were able to get to Pakistan,” he said.

While in Pakistan, Ali worked to help support his family. He couldn’t go to school, but he was able to learn English. When he returned to Afghanistan, he was selected to work for a subcontractor to the NATO Training Mission in Afghanistan.

“My responsibility was to do interpretation and translation between U.S. supervisors and Afghan commanders,” he said.

He worked with the Americans for 15 months ending in December 2012. At that point Ali knew he and his new wife had to leave Afghanistan. If there is one thing that the Taliban hates more than Americans, it’s Afghans who help Americans.

It took three years to get his Special Immigrant Visa. They left Afghanistan on Nov. 4, 2015, and arrived in the U.S. the following day.

Ali explained how difficult it was to leave his home country.

“It was really hard,” he said. “Everyone loves their country – you live in a county and you know the people there, and you know the customs, and you have joy together. Once you leave, you leave behind your parents. You hope to see them again, but after a few years some of them may die. When we had the farewell in the airport, my father said that maybe we cannot see each other again. He died after I left.”

When they arrived in Philadelphia, Ali and Nahid were provided a house by Hebrew Immigrant Aid Society, a Jewish-American nonprofit organization that provides services to immigrants, refugees and asylum seekers.

Now that they were safe, what Ali needed was to learn to drive. HIAS send Howard Bilofsky.

“ did many things for me and I owe him,” Ali said. “He was always there for me. He did things I can never forget. I feel like he was doing better for me than a family member. If he didn’t do this for me it would have been much harder, and today I’m a student in college and within two years I will get my degree so I can get a good job.”

Ali said he is surprised that some Americans don’t want immigrants.

“Some people think they will take jobs,” he said. “USA is the land of opportunity and Americans get the good jobs. It’s not easy for immigrants to get those jobs. They do the things that Americans don’t do.”

Ali, who describes his religion as “humanity,” offers this message to America:

Margaret and Howard have been helping immigrants for 25 years.

Margaret met the Hussainis when a HIAS worker asked her to take Ali and Nahid to a clothing drive.

“Everyone deserves some help and if we don’t do it, who is going to do it?” Margaret said. “I had a very hard time in my life for a while and I really appreciated when others made an effort to help me.”

“Every day the world feels more unjust,” he said. “We pick and choose opportunities as they present themselves – helping immigrants is something we can do.”

Margaret and Howard combine the spiritual and the practical in their support of immigrants.

“One goal is to show that Americans are good people and that they care,” Margaret said. “America is not giving that impression at all. It’s pretty terrible.

“I don’t sit down and say what’s my goal for ‘justice work.’ What I’m thinking about is what can I do to help Ali get the education he’s dying to get so that he can earn a better living – it’s pragmatic, not like we’re trying to cure injustice in the world. I’m not his savior.”

I’ve come to realize that Howard’s message is important. It’s easy to fall into the trap of thinking that people who help immigrants are somehow saintly. Maybe they are just people who care enough to give a helping hand. Rather than being special, maybe this is what normal should and could look like.

There are many ways Americans can support immigrants. What Margaret and Howard are doing is providing something that Ali and Nahid have lost forever: family.

“I agree that family is what they, and many others, lose in coming to America and I think it does need to be emphasized,” Margaret said. “When I explain our relationship with Ali’s family to others, I always stress that we think of them as friends, but this conversation added a depth that I didn’t think of and which is crucial. You don’t bring the infant children of too many friends into your house and let them run around and rearrange all your doodads.”

The humanity of immigrants and refugees is so easy to find. They come here to bring good, not evil, and to contribute to this country. The humanity of Americans who help immigrants and refugees is also easy to find even in today’s environment. Many Americans are helping people who must leave their home countries just to survive. Anyone can step up to this humanistic role.

I spent a lot of time looking for humanity in others. But this experience taught me that each of us needs to look for our own humanity and to act on it – that would change the world. It’s easy to say but often difficult to do.

The “Finding The Humanity” photo essay series can be found at TGoldmanPhotography.com