Each Boesendorfer piano takes five years to make. The craftsmen use only spruce wood from an Austrian white spruce that grows on the north side of the Alps above a certain altitude and is only … 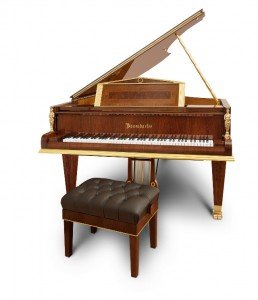 Each Boesendorfer piano takes five years to make. The craftsmen use only spruce wood from an Austrian white spruce that grows on the north side of the Alps above a certain altitude and is only harvested in January and February.

The Cunningham Piano Company, 5427 Germantown Ave. in Germantown, which is currently celebrating 125 years in business, has just received a Boesendorfer piano valued at $750,000 that will be shared with the public via a variety of concerts in January at Philadelphia locations. “There is insane craftsmanship that goes into making one,” said Jaimi Blackburn, Cunningham spokesperson, last week. “Billy Joel, Elton John and many other celebrities have one, as did Frank Sinatra and Michael Jackson. It is a piece of art to look at as well since it has all hand-applied 14k gold leaf.”

The Bosendorfer Opus #50.000 (the 50,000th piano made by the company) was first used in Philadelphia on Sunday afternoon, Jan. 3, in a program of music by Brahms and Schubert at the German Society of Pennsylvania, 611 Spring Garden St. It will be used next on Friday, Jan. 8, 8 p.m., in a program called “More Awesome Americans” featuring the music of Gershwin, Bernstein, Williams and Joplin at Vox Ama Deus Ensemble at Kimmel Center, Perelman Theater, 300 S. Broad St.

“We are working toward having the Bosendorfer #50.000 on display in the lobby of Cunningham on Jan. 13 through 17,” said Blackburn.

The Boesendorfer piano has been handmade since 1828. People can make an appointment to play this piano. It will also be used at a concert at the Curtis Institute of Music to honor a faculty member who has been there for most of her life and who is now 99 years old. The piano will only be in Philadelphia throughout January, after which it moves to Boston.

Each Boesendorfer piano takes five years to make as they use only spruce wood from an Austrian white spruce that grows on the north side of the Alps above a certain altitude and is only harvested in January and February. Boesendorfer only makes about 300 pianos each year!

According to Blackburn, the Opus #50.000 was inspired by two instruments that were created for the 1867 World Exhibition in Paris, both of which were neo-classical in concept. One was designed by Theophil Hansen (this year is the 200th anniversary of his birth), a famous Danish architect who designed many major buildings in Vienna including the Parliament and the world famous concert hall, the Musikverein.

“The other one,” said Jaimi, “was designed by Anton Grosser, who incorporated golden caryatids, similar to the ones in the Musikverein, in his design. The Opus #50.000 piano is a neo-classical instrument for the 21st century — opulent and beautiful yet not out of place in any setting.

“One major aspect of neo-classical design is the extensive use of gold. Gold leaf moldings on the piano cover the entire piano frame and were applied by hand with gold leaf. In addition, the front of the instrument features two bronze cast 24 carat gold-plated caryatids.

“The traditional lost wax casting method has been used which gives them a beautiful antique look. The original pattern was hand-carved in wood and took several months to create … Bosendorfer has a tradition of excellent piano cabinetry work using precious veneers. To showcase this skill, the design uses four different veneers — burr French walnut, French walnut, pear wood and maple.”

In addition to the standard 88 notes, the piano has four extra keys in the bass to subcontra F. These additional bass strings expand the tonal range and create additional harmonic resonances throughout the instrument, opening up an almost orchestral sound spectrum.

A Look Back at “Anchorman 2: The Legend Continues”

Visiting destitute village made even worse by Covid