Although Madeline Pendleton has retired as a crossing guard, she still works at Jenks part-time as a teacher's assistant. “But the main reason I want this article,” she said, “is that I want the kids to know I am still alive. I heard a rumor that because they no longer see me on the corner at Southampton and Germantown, some thought I had died.” 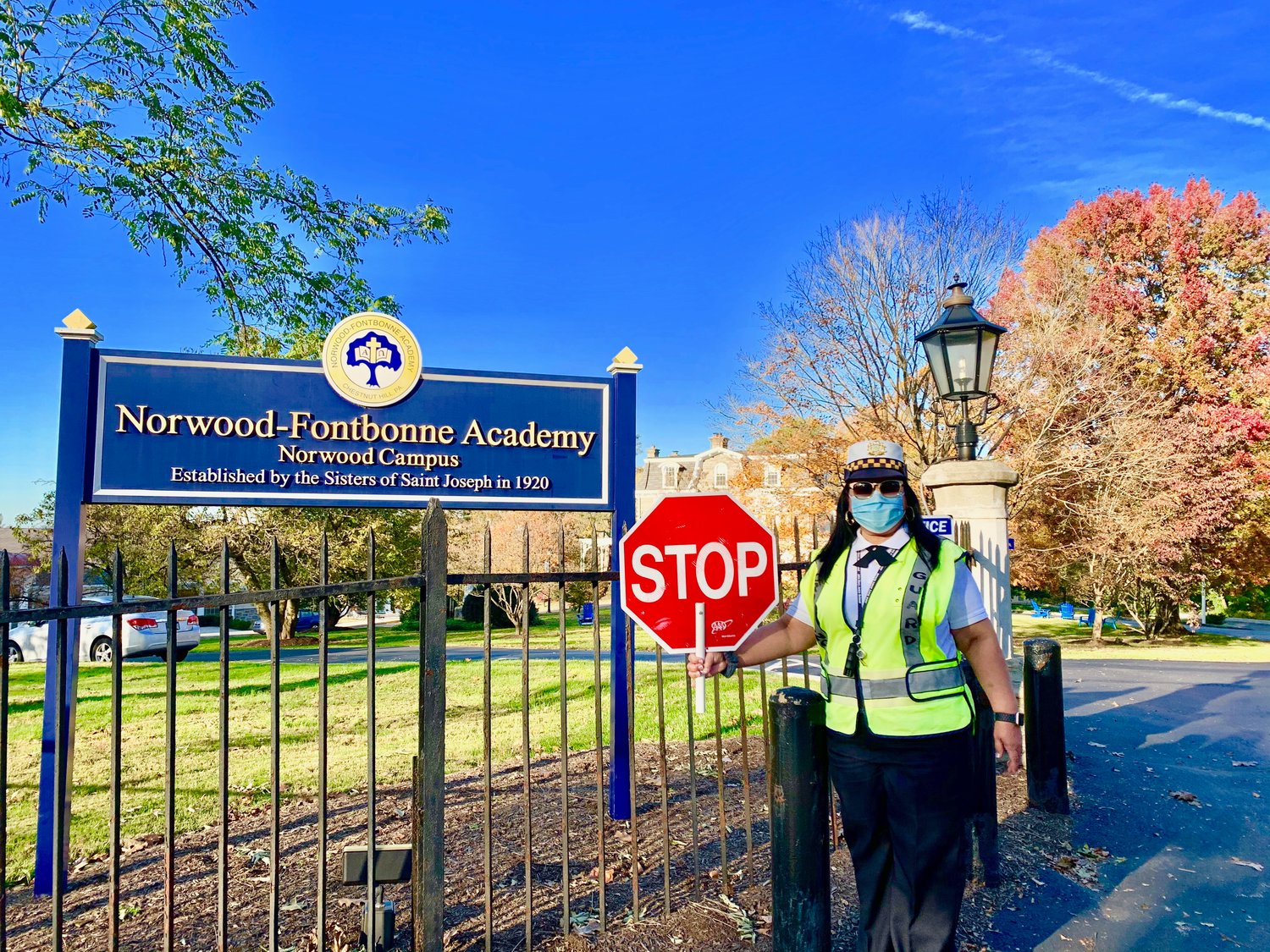 Mt.Airy resident Madeline Garcia Pendleton, who retired as a crossing guard at Jenks after 25 years (she is seen here during a brief period at Norwood-Fontbonne Academy),wants “the kids at Jenks to know I am still alive.I heard a rumor that because they no longer see me on the corner at Southampton and Germantown, some thought I had died."
Posted Thursday, October 28, 2021 6:00 am
by Len Lear

Mt. Airy resident Madeline Garcia Pendleton has lots of phobias — heights, spiders, airplanes (she just flew for the first time in her life at age 65), enclosed spaces like her own bathroom and the office where this interview was conducted (“This room is too small”) and hotel rooms (“We have to get a suite, even though they are quite expensive”), among others.

But one thing that Pendleton has no fear of is children; she loves them unconditionally. So it pained her to leave her job recently as a crossing guard at Jenks Academy in Chestnut Hill after 25 years of making sure that kids navigate the corners at Germantown and Southampton Avenues safely.

“I really love these kids,” she said last week, “and it was hard to stop being a crossing guard, but I have bad arthritis and bad knee pain, and the cold weather is brutal for me.” She has chronic trouble with her knees, with surgery on her left in 2016 and a total replacement for the right last year. Soon the left knee will also have to be replaced. “It’s painful for me to get out of bed,” she said.

Although Pendleton has retired as a crossing guard, she still works at Jenks part-time as a teacher's assistant. “But the main reason I want this article,” she said, “is that I want the kids to know I am still alive. I heard a rumor that because they no longer see me on the corner at Southampton and Germantown, some thought I had died.”

Pendleton's husband of 45 years, Bill, is a Germantown native who works as an engineer for the Siemens Corporation. He also is part of the Jenks family, having formerly coached basketball there for girls and boys for more than 30 years. “We just love Jenks,” she said. “My grandson, Adam, goes there now. He is in second grade.”

Madeline Pendleton was born in Brooklyn, but her parents, who were born in Puerto Rico, came to Philadelphia when she was 6 years old, looking “for a better life.” The family lived at 9th and Lehigh in North Philadelphia, and she went to Kensington High School for Girls. Her dad was very strict and made sure she went to all-girls schools. She received an associate's degree in liberal arts from Ellen Cushing Jr. College in Bryn Mawr, which lasted from 1960 to 1991, and was also only for girls.

The former crossing guard started as a Head Start preschool teacher at the Philadelphia Parent Child Center, Germantown and Cumberland, and worked there for 10 years. She also ran a daycare center in her home for eight years, caring for six children in addition to her own three.

And then, 27 year ago, they left North Philadelphia and moved to Mt. Airy.

“The neighborhood got so bad. Drug dealers would sit on our front steps and on top of cars,” she said. “My husband grabbed one by the neck and put him up against the wall. They retaliated, smashing up his Mustang. When kids make it difficult for you to get into your own house, it's time to move.

“So we moved to Roumfort Road in Mt. Airy, thank God. It's the best thing we ever did. An insurance guy told us that where we live is a little piece of heaven, and it is. We would not go anywhere else. It is so diverse. We love our neighbors, and our children have made lifelong friends here.”

“They had me disciplining kids at Houston, and I could not do that. I cannot be mean, although my kids would say otherwise,” she said.

So she volunteered at Jenks, and three months later then-principal Delores Turner hired her as a supportive services assistant, which meant she did things like sit with kids who had been pulled out into the hallway for bad behavior.

Finally, in 1995, she became the school’s first crossing guard.

“After all these years, I would like to say that the teachers at Jenks - Miss Moore, Miss Wilson, Miss Hensley and so many others - are all wonderful,” she said. “Some parents are spending so much money to send their kids to private schools when the teachers and principals there could not possibly be better than they are at Jenks!”

NFA celebrates, prepares for the next 100 years